The California Association of Realtors are reporting this week that California's existing home sales ticked up in September 2016 on a year-over-year basis for the first time in seven months as a shortage of homes available for sale continues to hold back the market.

Closed escrow sales of existing, single-family detached homes in California totaled a seasonally adjusted annualized rate of 425,680 units in September 2016, according to information collected by C.A.R. from more than 90 local MLSs statewide. The statewide sales figure represents what would be the total number of homes sold during 2016 if sales maintained the September pace throughout the year. It is adjusted to account for seasonal factors that typically influence home sales.

California Housing at a Glance:

The September figure was up 1.3 percent from the revised 420,360 level in August and up 0.8 percent compared with home sales in September 2015 of a revised 422,360. Home sales remained above the 400,000 pace for the sixth straight month, and the year-over-year increase was the first since January.

"While higher sales both on a monthly and an annual basis is a glimmer of good news, with most of the home-buying season behind us for 2016, it's not enough to tip the scales for an increase above 2015's sales pace," said C.A.R. President Pat Zicarelli. "With listings continuing to decline and demand still strong, especially at the lower end of the market, affordability will remain a challenge for would-be buyers."

The statewide median price remained above the $500,000 mark for the sixth straight month, with minimal signs of cooling down outside of a few select markets. The median price of an existing, single-family detached California home was down 2.3percent in September to $514,320 from $526,580 in August. September's median price increased 6.1 percent from the revised $484,670 recorded in September 2015. The median sales price is the point at which half of homes sold for more and half sold for less; it is influenced by the types of homes selling, as well as a general change in values. The monthly price decline is primarily due to seasonal factors.

"While demand remains strong for lower-priced homes, which are more inventory constrained, sales of homes at the higher-end have slowed significantly," said C.A.R. Vice President and Chief Economist Leslie Appleton-Young. "For example, sales of properties priced between $2 million and $3 million, which are the least inventory constrained, grew by high double-digits in 2014 and 2015, but the pace has slowed down to a negligible 0.2 percent increase through the first nine months of this year."

Other key points from C.A.R.'s September 2016 resale housing report include: 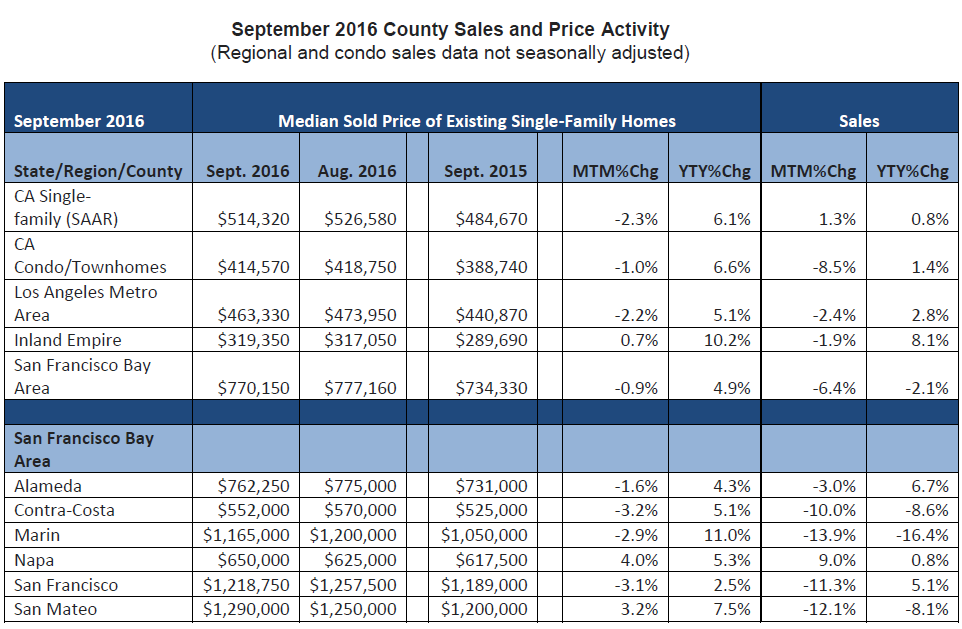