According to the California Association of Realtors, California existing home sales edged up in May 2016, rising above the 400,000 benchmark level for the third straight month, while strained housing supply continued to push prices higher.

Closed escrow sales of existing, single-family detached homes in California totaled a seasonally adjusted annualized rate of 410,090 units in May, according to information collected by C.A.R. The statewide sales figure represents what would be the total number of homes sold during 2016 if sales maintained the May pace throughout the year.  It is adjusted to account for seasonal factors that typically influence home sales.

"While May home sales edged up slightly, we are seeing a moderation, driven by tight housing inventory and reduced affordability," said C.A.R. President Pat "Ziggy" Zicarelli. "Affordable areas, such as the Inland Empire and Central Valley, where housing supply is relatively more abundant, are outperforming the San Francisco Bay Area, where thin housing availability is hampering home sales. In fact, eight of that region's nine counties experienced a sales decline from the previous year."

A change in the mix of sales and a continued mismatch between supply and demand pushed the median price of an existing, single-family detached California home 1.8 percent higher in May to $518,760 from $509,590 in April. May's median price was 6.3 percent higher than the revised $487,960 recorded in May 2015. The median sales price is the point at which half of homes sold for more and half sold for less; it is influenced by the types of homes selling as well as a general change in values. May marked the second consecutive month that the median price was above $500,000; it is still below the pre-recession peak of $594,530 reached in May 2007.

"The California housing market is growing modestly so far this year, with home sales running 2 percent higher year to date," said C.A.R. Vice President and Chief Economist Leslie Appleton-Young. "Fundamental drivers, such as household formation and economic growth will continue to move housing demand forward. However, constrained inventory, low affordability, and regional disparities will be a drag on this year's market outlook, which is forecast to see a 1.3 percent growth in sales and a 5 percent increase in the median home price."

Other key points from C.A.R.'s May 2016 resale housing report include: 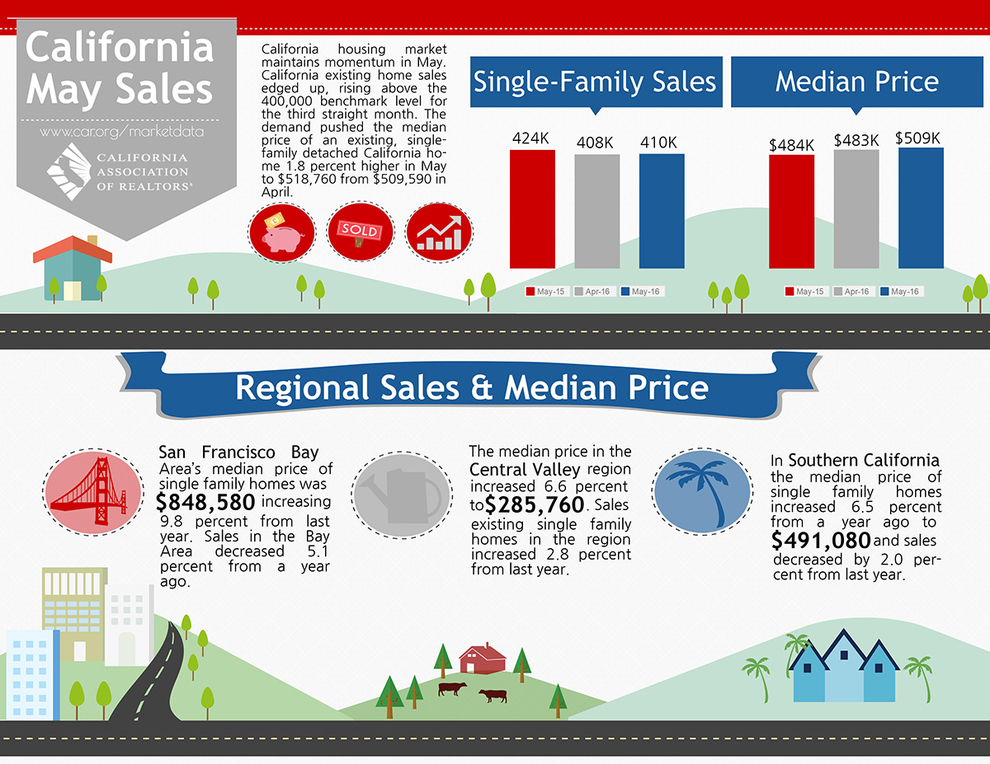