According to CoreLogic's recently released 2018 CoreLogic Storm Surge Report, more than 6.9 million homes along the Atlantic and Gulf Coasts are at potential risk of damage from hurricane storm surge inundation with a total reconstruction cost value (RCV) of more than $1.6 trillion.

The National Oceanic and Atmospheric Administration (NOAA) reports the 2018 hurricane season is predicted to have near- to above-normal activity. NOAA predicts a 70 percent likelihood of 10 to 16 named storms. Five to nine of these will develop into hurricanes, and one to four are predicted to reach Category 3 classification or higher.

"While industry predictions for this year's storm season indicate average activity levels, associated storm surge risk remains an important consideration for residential and commercial properties in the 19 states analyzed," said Dr. Tom Jeffery, senior hazard scientist at CoreLogic. "Depending on the location of a storm's landfall and that area's population density and reconstruction costs, lower Category storms can cause just as much damage as storms in higher categories."

Regionally, the Atlantic Coast has more than 3.9 million homes at risk of storm surge with an RCV of more than $1 trillion, an increase of around $30 billion compared to 2017. The Gulf Coast has more than 3 million homes at risk with over $609 billion in potential exposure to total destruction damage, with over $16 billion increase compared to 2017. Areas with less coastal exposure but with lower elevations that extend inland tend to have more total homes at risk because the surge water can travel farther inland.
Additionally, due to market conditions and previous storm surge damage, construction costs can increase despite having a lower number of at-risk homes compared to other states or Core-Based Statistical Areas (CBSAs).

At the state level, Florida has the most coastal exposure and has the most susceptibility to storm surge flooding of the 19 states analyzed, with more than 2.7 million at-risk homes across the five risk categories (Table 3). Louisiana ranks second with over 817,000 at-risk homes, Texas ranks third with more than 543,000 at-risk homes, and New Jersey ranks fourth with over 471,000 at-risk homes. Since the number of homes at risk strongly correlates with the accompanying RCV, Florida also has the highest RCV at over $552 billion. Notably, New York ranks second in RCV with over $190 billion, despite its fifth-place ranking in number of homes at risk, due to the density of the residential population near the coast and higher construction costs in this state. Louisiana and New Jersey are also near the top of the list for RCV, with Louisiana totaling more than $186 billion and New Jersey totaling over $146 billion. Texas sits in fifth place for RCV, at more than $103 billion.

Due to the concentration of residences in and around large metro areas, 15 CBSAs account for 67.2 percent of the 6.9 million total at-risk homes and 68.2 percent of the total $1.6 trillion RCV (Table 5). This reinforces the idea that the location of future storms will be integral to understanding the potential for catastrophic damage. A low-intensity storm in a densely populated, residential urban area can do significantly more damage than a higher-intensity hurricane along a sparsely inhabited coastline. The Miami metro area, which includes Fort Lauderdale and West Palm Beach, has the most homes at risk, totaling over 788,000 with an RCV of more than $156 billion. By comparison, the New York metro area has slightly fewer homes at risk at just over 726,000, but a significantly higher RCV totaling more than $277 billion, a 5 percent increase compared to 2017. 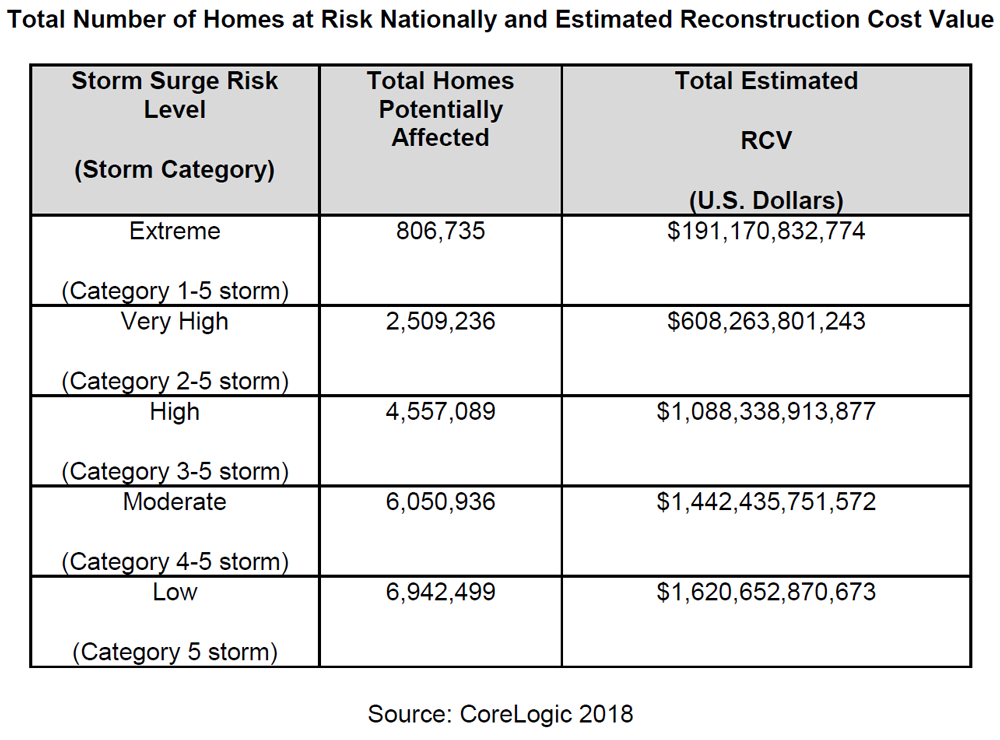 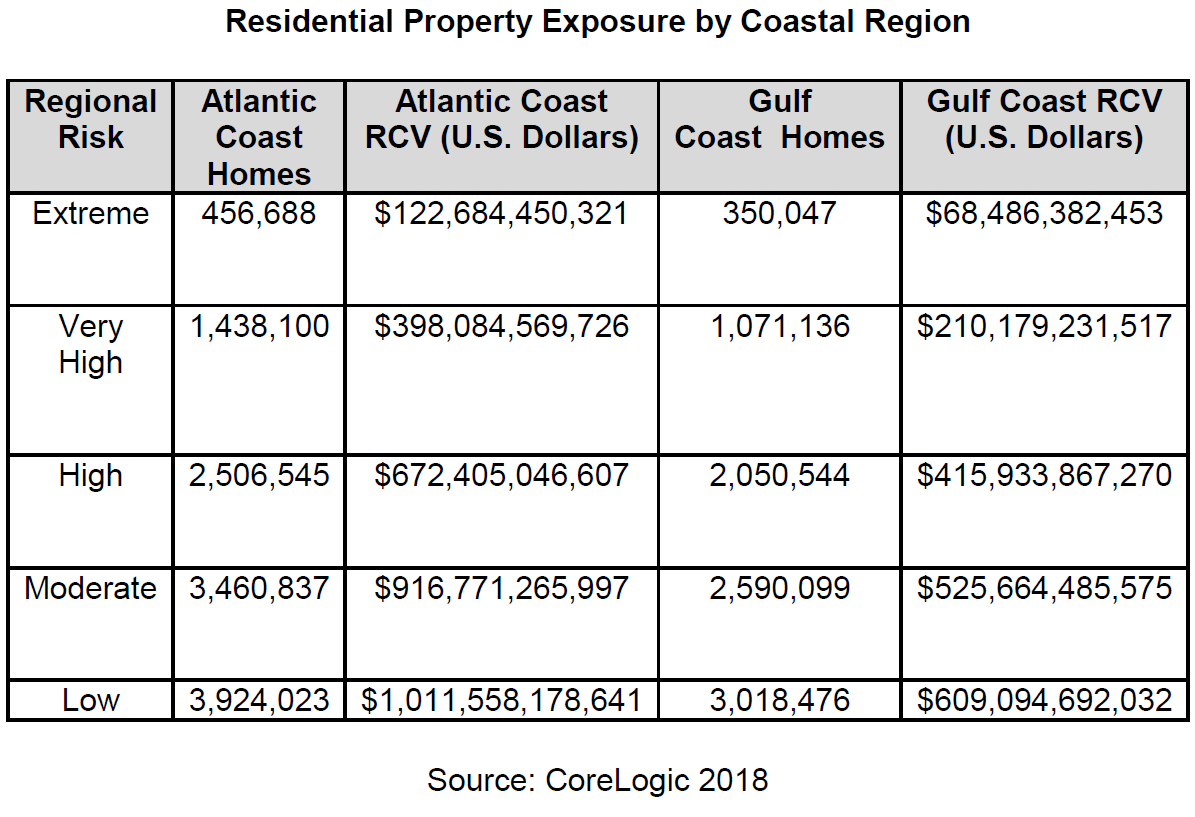 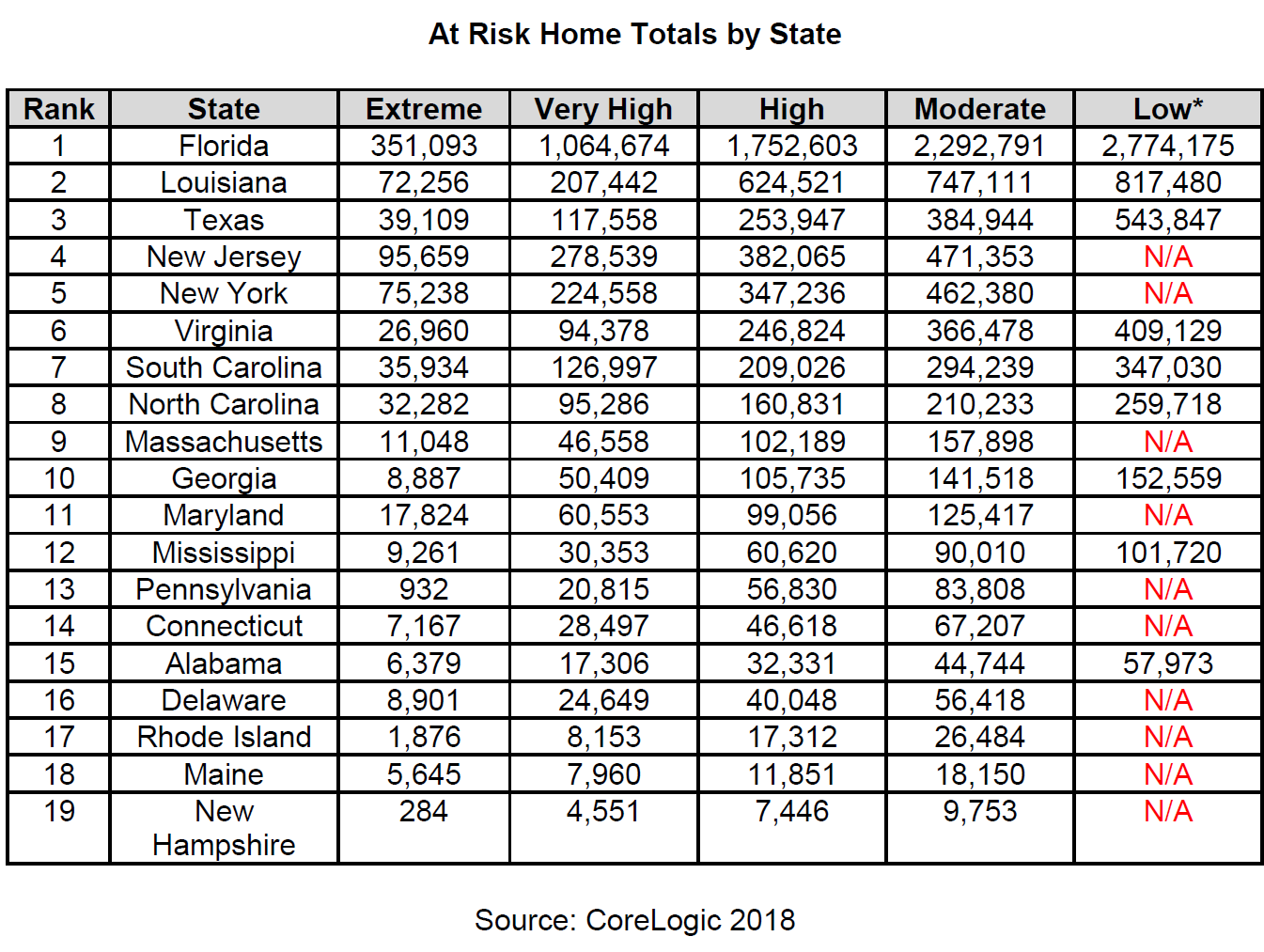 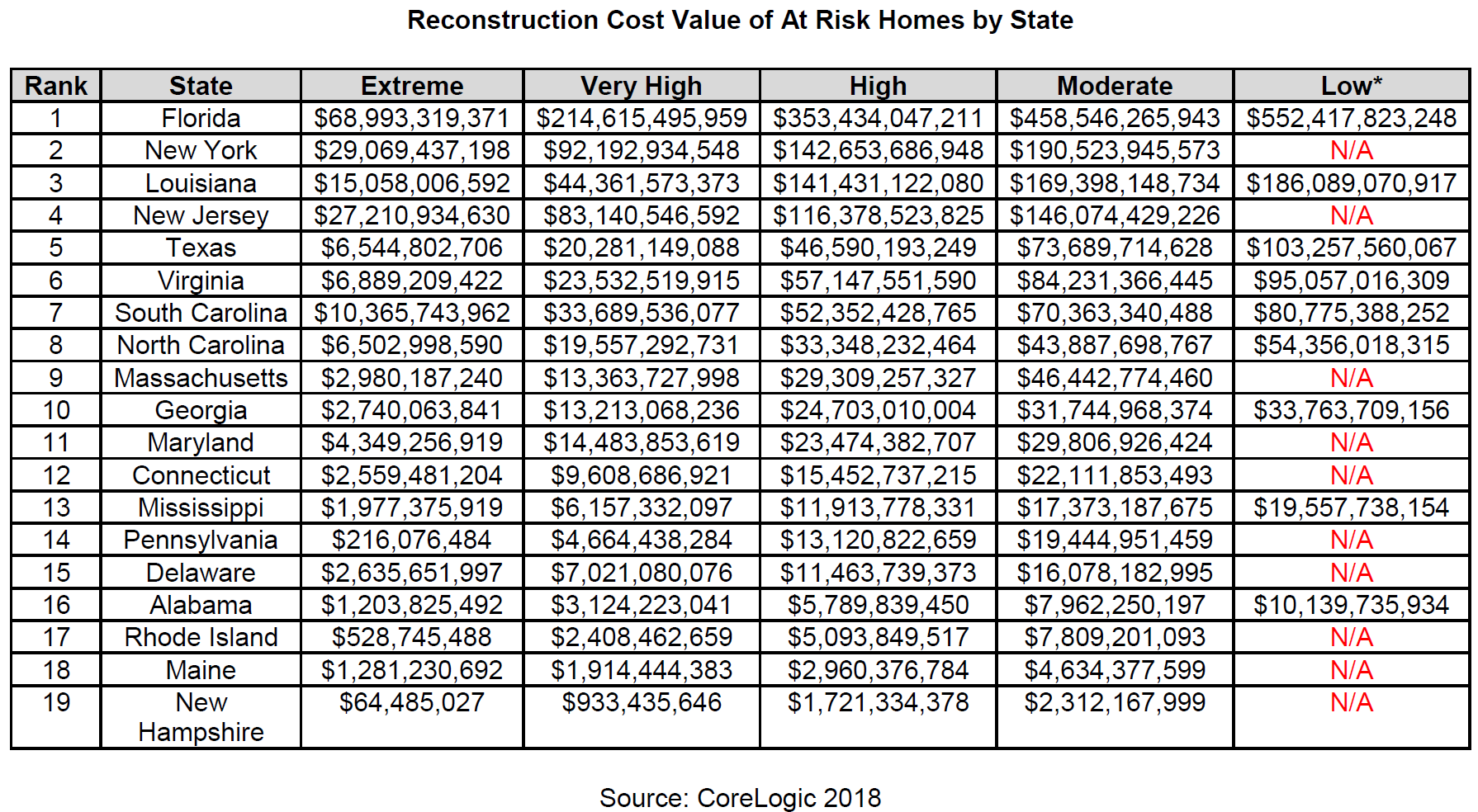 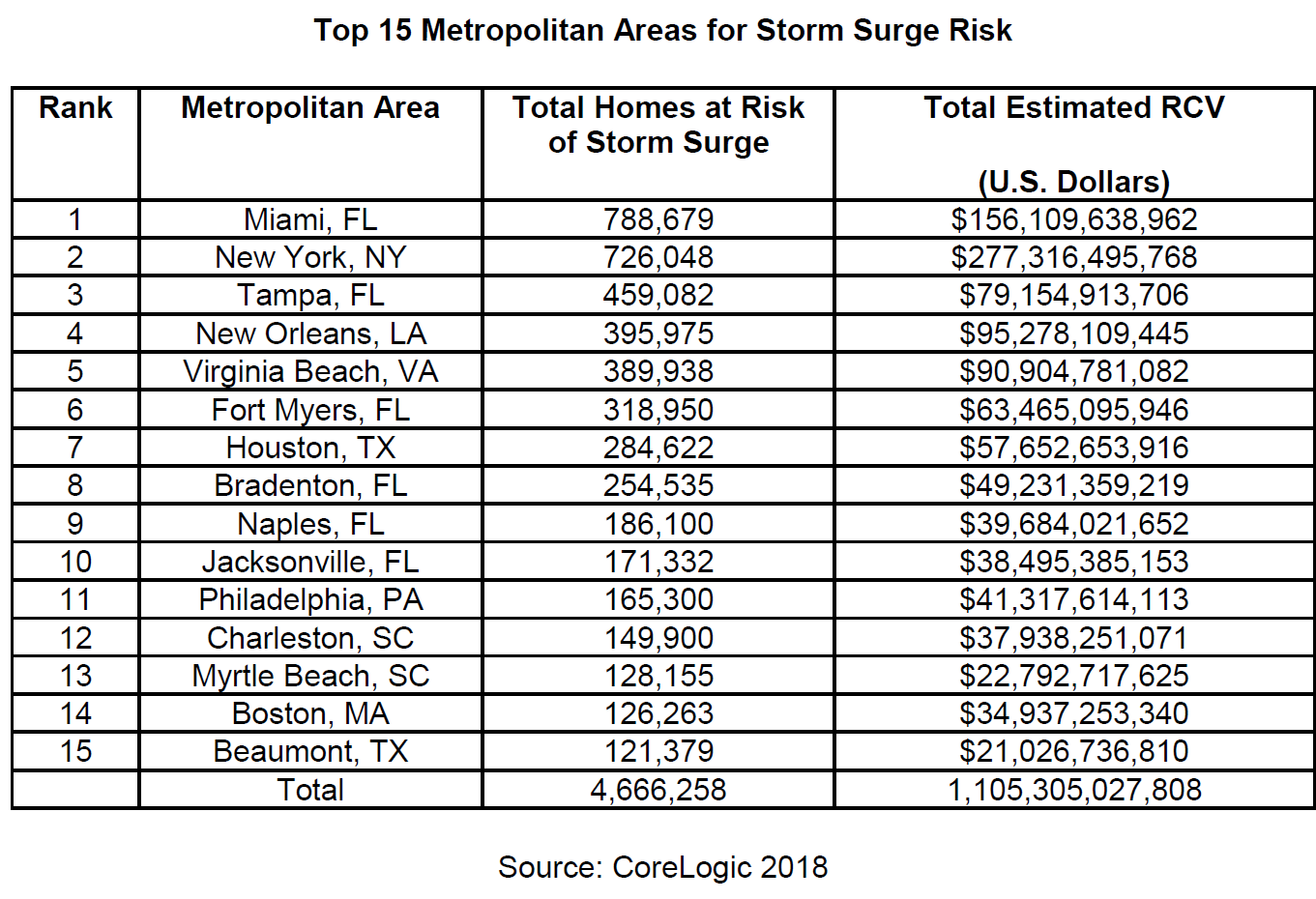