According to international real estate advisor Savills, the United States of America a clear number one worldwide for investability on the basis of economic growth and market recovery potential. Based on Savills newly published World Residential Investability Ranking giving a number of various countries a rating on the basis of broad economic and demographic factors.

But local considerations have to be taken into consideration, the firm says. "There is a world of difference within the USA between top tech cities and languishing rustbelt ones," says Yolande Barnes, director of Savills world research.  Savills tips San Francisco among the very best of their selected residential markets.

The UAE comes second in their country rankings for residential investment potential, as domestic wealth creation and increasing demographic and regional demand continues to grow. The Dubai market has seen this type of more robust demand take the place of more speculative overseas investment in recent years but, Savills assesses, Dubai is too near the top of the present cycle to top the investability league.

Country investability, based on economic performance and growth prospects alongside growing population is behind Savills ranking of Singapore and the UK in 3rd and 4th place respectively.

China and Hong Kong occupy 11th and 12th places among the 14 countries in the Savills survey. In these locations Savills see current pricing as cyclically high and offering poorer value for short to medium term investors. "These are still big and investible markets, but we'd expect to see rental growth and yield movement before they once again top our investability list," says Barnes.

"It is vital that investors understand the long term demographic, economic and supply-side drivers of demand - and therefore sustainable value - when making investment decisions. These can be different at national and local level.

"When a growing population, growing affluence and limited housing or land supply converge, we would anticipate real house price growth. The absence of one or more of these variables can stall a housing market and the absence of two or more can send property values downward."

The Savills ranking focuses on countries with cities and resort locations that have consistently attracted investor interest over recent years.

The way that variables such as recessionary cycles, inflation and fiscal regimes, the availability and cost of finance, land supply politics, policies and planning play out on the ground is extremely complex and results in a wide variety of market behaviors.

To illustrate this, Savills has examined the five year price growth potential of popular investment locations within each ranked country.  The strength of the USA as an investable destination becomes clear, with its wide range of attractive opportunities.  San Francisco is projected to see the strongest mid-term growth, ahead of New York, Los Angeles and Miami.

Meanwhile, world class cities such as London, Singapore and Hong Kong look more fully valued and this is expected to restrict growth relative to other cities over the next 5 years. Meanwhile, Shanghai, while expecting population growth, has seen a long period of asset price inflation and needs a period of rental growth before investors are attracted back into the market. Other cities are faced with longer-lived demographic issues. Geneva, for example, like Switzerland in general, will be constrained by declining populations as well as the strong Swiss frank making international activity less attractive.

Other investment markets tipped for growth in the coming five years include a mix of leisure destinations and secondary cities, as global wealth begins to look beyond the core prime world city markets to alternative, higher-yielding markets. These include some of the fully-discounted southern European cities and resorts as well as the Caribbean islands that attract an international following. 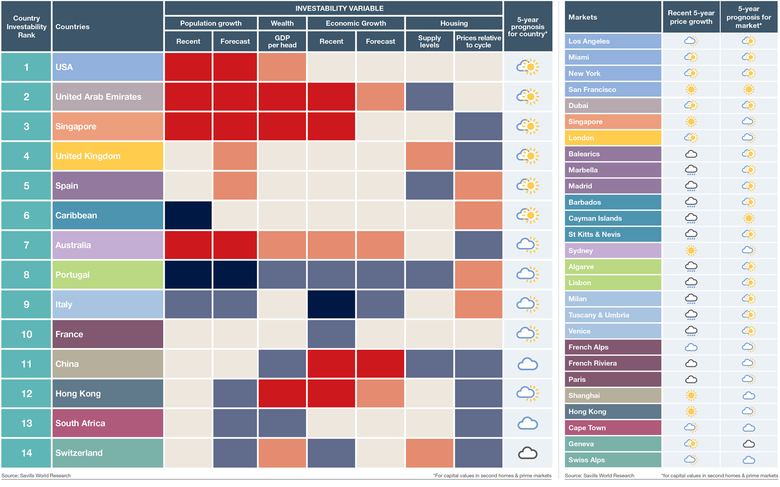