According to Zillow research, finishing school, joining the workforce and moving out on your own is a rite of passage for many young people. Today's young adults are taking longer to make this transition, and doing it less often overall, than previous generations.

Typically, adults begin living independently later in more expensive metros, and the gap has widened over the past four decades. Since 1980, the tipping point age has increased by an average of about four years in metros in the top quarter of most expensive home values, compared to about two years for metros in the bottom three quarters. In 2017, the tipping point age was highest in Riverside, Los Angeles, New York and Miami at 29. Each of these metros have seen their tipping point ages increase by at least five years since 1980, while it has only increased one year in less-expensive Oklahoma City, for example - from 21 to 22.

Young people today more often pursue higher education which typically delays when they begin working full-time. In previous decades, people with a high school education lived independently at similar rates to those with a college education, likely due to the additional years of earnings they can accrue in their early 20s while their college counterparts are in school. Now, there is a significant gap. Those with a college degree are more likely to live independently than those with a high school education by age 26, and at age 30 the gap widens to 12 percentage points.

Changes in social and cultural norms, as well as affordability challenges, likely explain some of the shift. Young people today are more likely than their predecessors to live in urban cores, where housing is more expensive and rent price growth has hindered the ability of renters to afford a home without roommates or save enough of their salaries each month for a down payment. Increased demand for starter homes as the large Millennial generation reaches typical home-buying age, along with persistently low inventory, has contributed to robust home value appreciation in many large metro areas, making it more difficult for first-time buyers to get into a home.

"It's true that people are becoming homeowners later and later in life, but even before that today's adults are taking significantly longer to simply live on their own," said Skylar Olsen, director of economic research at Zillow. "While some may consider the impact of evolving tastes and cultural norms, as economists we can point to very real changes in household budgets that make the classic tactics of sticking with mom and dad or extending those college roommate years past graduation more appealing. As the costs of life's basics outpace incomes, parents that offer housing after their children's schooling has ended can provide breathing space, allowing the next generation to begin paying off substantial college debt. Smaller, more accessible housing markets often tout not just the possibility of homeownership for todays' adults, but simply the opportunity for independence and privacy - features of life that major job markets struggle to offer more and more." 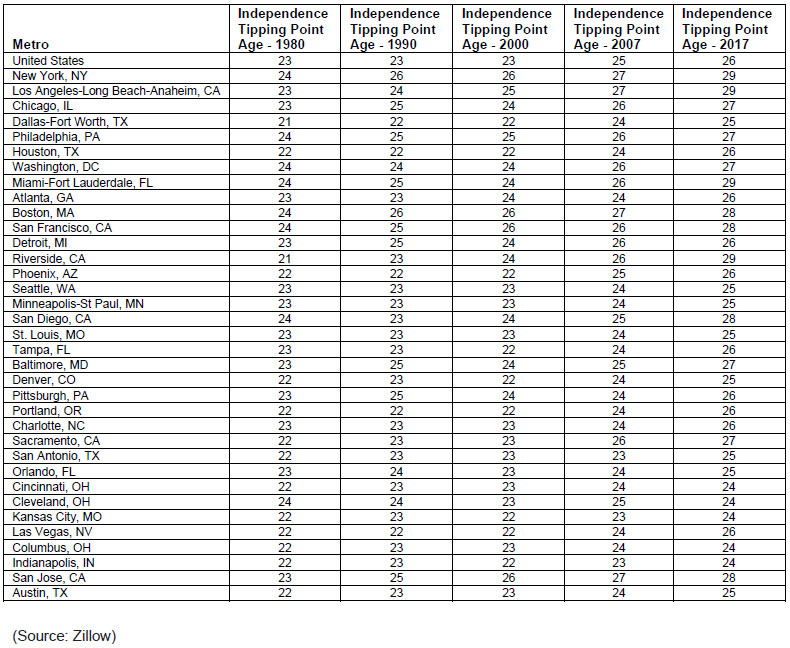