According to Redfin, the four U.S. metropolitan areas with the highest inflation rates in the third quarter are Covid migration hotspots.

Phoenix, Atlanta, Tampa and Miami experienced double-digit inflation and all ranked near the top of Redfin's list of most popular destinations for relocating homebuyers.

In Phoenix, the price of goods and services rose 13% year over year on average, the highest inflation rate among the metros for which the U.S. Bureau of Labor Statistics (BLS) provides inflation data. Phoenix was the sixth-most popular destination for Redfin.com users looking to move from one metro to another in the third quarter.

Inflation and migration have become increasingly linked. Remote work allowed scores of Americans to move to the Sun Belt during the pandemic in search of affordability and warm weather, which drove up housing prices, a key contributor to inflation. That's why migration hotspots now have the highest inflation rates--a trend that was much less acute before the pandemic. In 2019, for example, Los Angeles had the second highest inflation rate, but it was losing residents.

"The pandemic triggered a great rebalancing of affordability," said Redfin Deputy Chief Economist Taylor Marr. "Americans left pricey coastal job centers and moved to more affordable places in the Sun Belt, but now those more affordable places are seeing affordability erode faster than anywhere else in the country. Some of these areas may lose their titles as top migration destinations in 2023 as a result."

The increase in housing costs is a bigger contributor to inflation in migration hotspots than in the places homebuyers are leaving.

In Phoenix, for instance, shelter costs rose 19% year over year in August, one of the top inflation drivers. That compares with Phoenix's overall inflation rate of 13%. Food was also a major contributor to inflation, with prices up 14.1%.

By comparison, San Francisco only saw shelter costs increase 2.1% year over year, one of the smallest inflation drivers. Fuel, transportation and food were much bigger contributors to the region's overall inflation rate, which was 5.7%. Redfin plans to update these figures through October on Thursday, Nov. 10, when the BLS is scheduled to release its latest data.

The discrepancy in inflation rates across the U.S. is at the most extreme level on record because so many places surged in popularity during the pandemic while so many others plummeted in popularity. 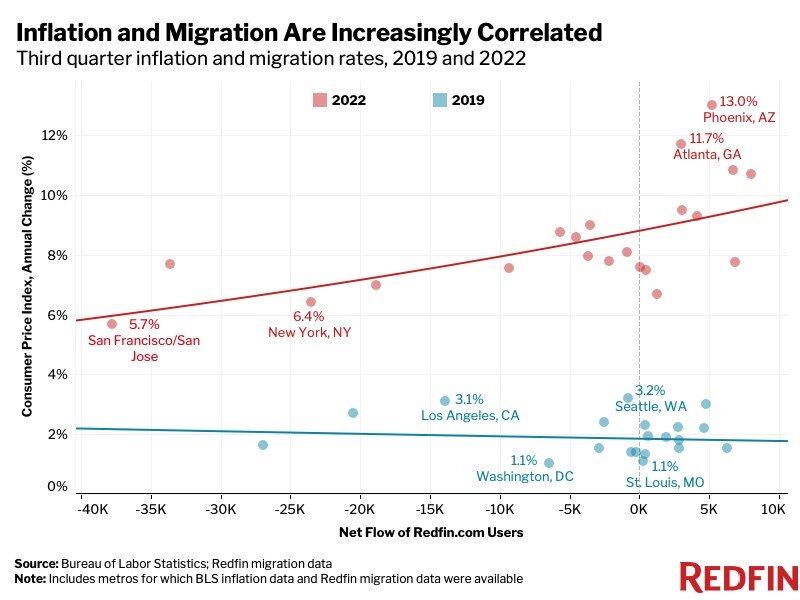 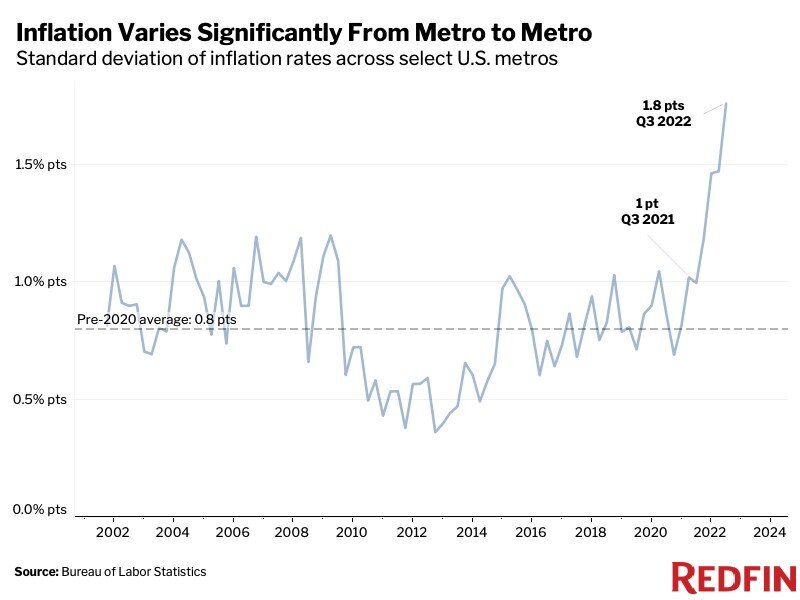