Balance of Power Between Home Buyers and Sellers is Shifting in U.S.

According to a recent survey by national online brokerage firm Redfin, the balance of power between U.S. home buyers and sellers is shifting. The survey of 900 Redfin agents across the country revealed that only 6 percent of respondents believed sellers held all the power, down from 36 percent in the first quarter.

The number of Redfin agents saying sellers and buyers have equal power is the highest recorded since Redfin first asked the question in the fourth quarter of 2013. Twenty-eight percent of agents surveyed said there is an equal balance of power in their market, up from 12 percent in the first quarter.

"Buyers' attitudes are changing dramatically," said Redfin San Diego agent Jordan Clarke. "There are more bidding wars now than there were this time last year, but more homes aren't selling for above the asking price. Once the price gets too high buyers just walk away."

As buyers push back, the share of Redfin agents who think now is a good time to sell has fallen to 58 percent, the lowest level recorded by Redfin in three years.

"Sellers tend to look backward, while buyers mostly look ahead," Redfin Chief Economist Nela Richardson said. "As a result, more than a quarter of home sellers had to drop their price in October. However, seller expectations will eventually come down to what buyers are demanding. It's still a good time to sell, but just may not be as lucrative as many sellers hope."

Highlights from Redfin agent survey include: 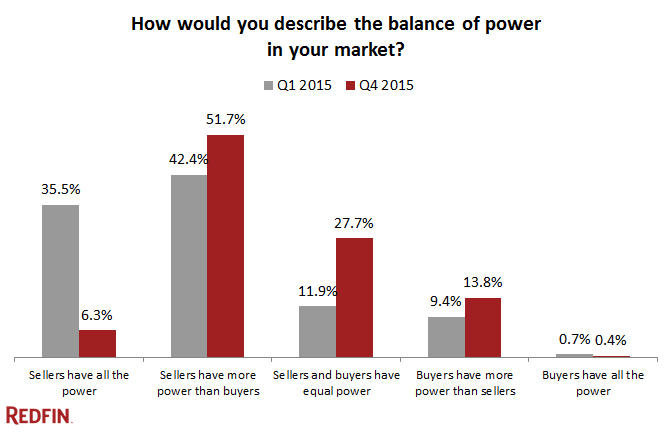