According to Zillow, although the typical value of a home in the United States is about $263,000, the number of "million-dollar cities" spiked sharply in 2020. There are 45 more U.S. cities with a typical home value of at least $1 million than there were a year ago -- the largest increase in at least a decade.

There are now 312 million-dollar cities, up 104 from five years ago. Nearly half of those 104 crossed that threshold in 2020, a reflection of the flaming hot market last year that saw home values appreciating near 7.5% annually in November as demographic trends and pandemic effects brought surging demand through most of 2020.  This follows a year in which home prices appreciated at the lowest rate since 2013 and a net of two cities fell below the $1 million threshold.

Million-dollar cities are fairly congregated geographically, with 70 percent concentrated within nine coastal metro areas. Among those, 61 are in the San Francisco metro area, 51 are clustered around New York City and 39 are in the Los Angeles area. The metro areas of San Jose (20 cities), Boston (11),  Miami-Fort Lauderdale (11), Seattle (9) and Washington, D.C., (8) also have multiple cities where the typical home price exceeds $1 million.

"In 2020 home values soared nationwide because of incredible demand across all price tiers, which we expect to continue well into 2021," says Zillow senior economist Chris Glynn. "Despite the label, there are homes available in these communities for less than $1 million, but buyers must be realistic about their wish list and act quickly in the current market, especially since homes are selling in a matter of days in many places.  For sellers, it is possible to capitalize on the recent growth in these markets and relocate to far less-expensive markets - particularly with an increase in remote work offering flexibility in the job market."

Historically, the list of million-dollar cities is dominated by areas that offer natural amenities like proximity to the ocean and mountains, and many of the cities that joined the list this year fit that mold. Some newcomers include Potomac, Maryland; Longport, Long Beach Township, and Allenhurst in New Jersey; and Westhampton and the Town of Shelter Island in New York. Calistoga and Yountville in California's Napa Valley also crossed the $1 million threshold in 2020, as well as Incline Village, Nevada, in the Lake Tahoe area.

"An increased demand in places like Potomac and other more expensive areas around the county is happening because of the pandemic-driven need for more indoor and outdoor space, home offices, pools and more," said Samer Kuraishi, a Best of Zillow Premier Agent and President of The ONE Street Company, a boutique real estate firm in Washington, D.C. "We're seeing more buyers from afar using technology to tour homes and buy 'sight unseen.' The sellers who have a great media package, including a floor plan with dimensions, virtual staging and 3D imaging, have the edge in such a competitive market." 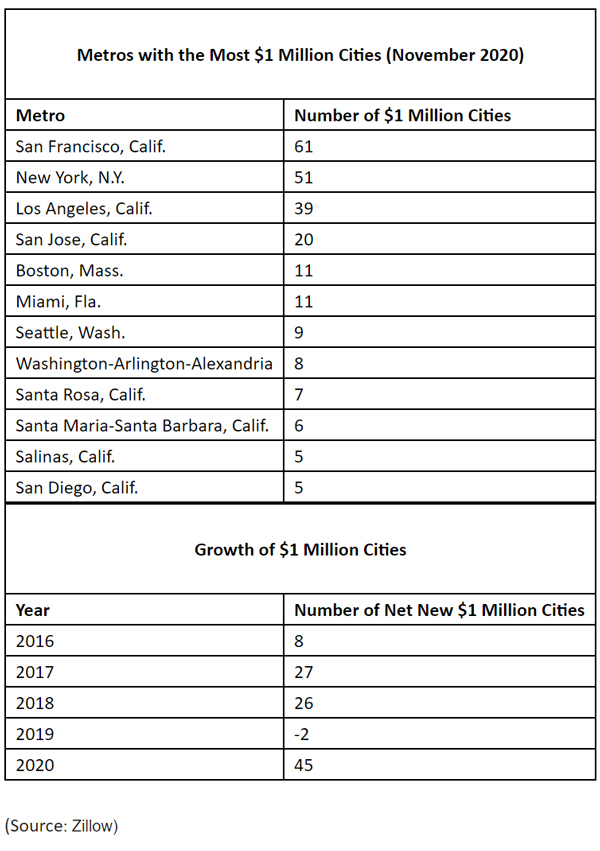