U.S. Home Prices Predicted to Dip in Second Half of 2020

Based on Zillow's latest May 2020 Real Estate Market Report, U.S. home values may decline in the second half of the year.

According to the Zillow Home Value Index, the typical home value in the U.S. is $251,598, up 4.3% year over year -- a small acceleration from April's 4.2% year over year. But by more recent measures the growth rate has begun to slow.
In April 2020, home values grew 0.41% month over month. In May, that slowed to 0.35%, the biggest one-month slowdown since March 2019 and a possible indicator that the market is headed for home value declines in the coming months. The most recent forecast from Zillow's economic research team shows an expected 1.8% drop in prices through October 2020 from the highs in February, with a slow price recovery by mid-spring in 2021. The year-over-year change is forecasted to bottom out at -0.7%.

May's home value growth slowdown was widespread, hitting 27 of the 35 largest U.S. metros. Home value growth slowed the most over April in a mix of the most expensive areas (San Francisco, San Jose, Los Angeles and Seattle), what had been the hottest markets (Phoenix, Columbus and Indianapolis) and metros in states with a relatively high number of COVID-19 cases (Detroit and Pittsburgh).

"Home buyers returned to the market earlier than might have been expected given the state of the economy, finding a market starved for inventory because of seller uncertainty. This improved demand has supported home prices and appears to have given sellers a confidence boost as new listings have slowly picked up," said Skylar Olsen, senior principal economist at Zillow. "The next question housing will face is whether this growth can continue after demand built up during housing's brief pause in the pandemic's early days runs its course. It's likely housing will feel the broader economy's downturn eventually, though to a mild degree, and home values will fall in the coming months."

Annual rent growth slowed for the third consecutive month, up 2.2% year over year to $1,657 after growing 3.4% annually just two months prior. That's the lowest rate of year-over-year growth since at least 2014. The annual growth rate slowed from the previous month in 27 large metros, and rents fell from last May in New York and San Jose.

In a positive sign for inventory, for-sale listings grew 1.5% from last month. Still, inventory is not growing at the rate typically seen during the springtime -- inventory grew 4.5% from April to May 2019 -- and is down 9.6% from last year as a result. Increased buyer demand is helping to keep inventory low -- newly pending sales were up 28.5% month over month as of the first week of June, and page views on for-sale homes on Zillow were 41% higher than a year ago at the end of May. It's likely buyer demand will soften in the coming months as the wave of pre-existing demand from before the pandemic dries up, especially if unemployment remains high.

Mortgage rates listed by third-party lenders on Zillow started the month at 3.52% and rose to a peak of 3.59% on May 11. Rates reached their monthly low on May 21 at 3.42%, and ended the month at 3.49%. Zillow's real-time mortgage rates are based on thousands of custom mortgage quotes submitted daily to anonymous borrowers on the Zillow Group Mortgages site by third-party lenders and reflect recent changes in the market. 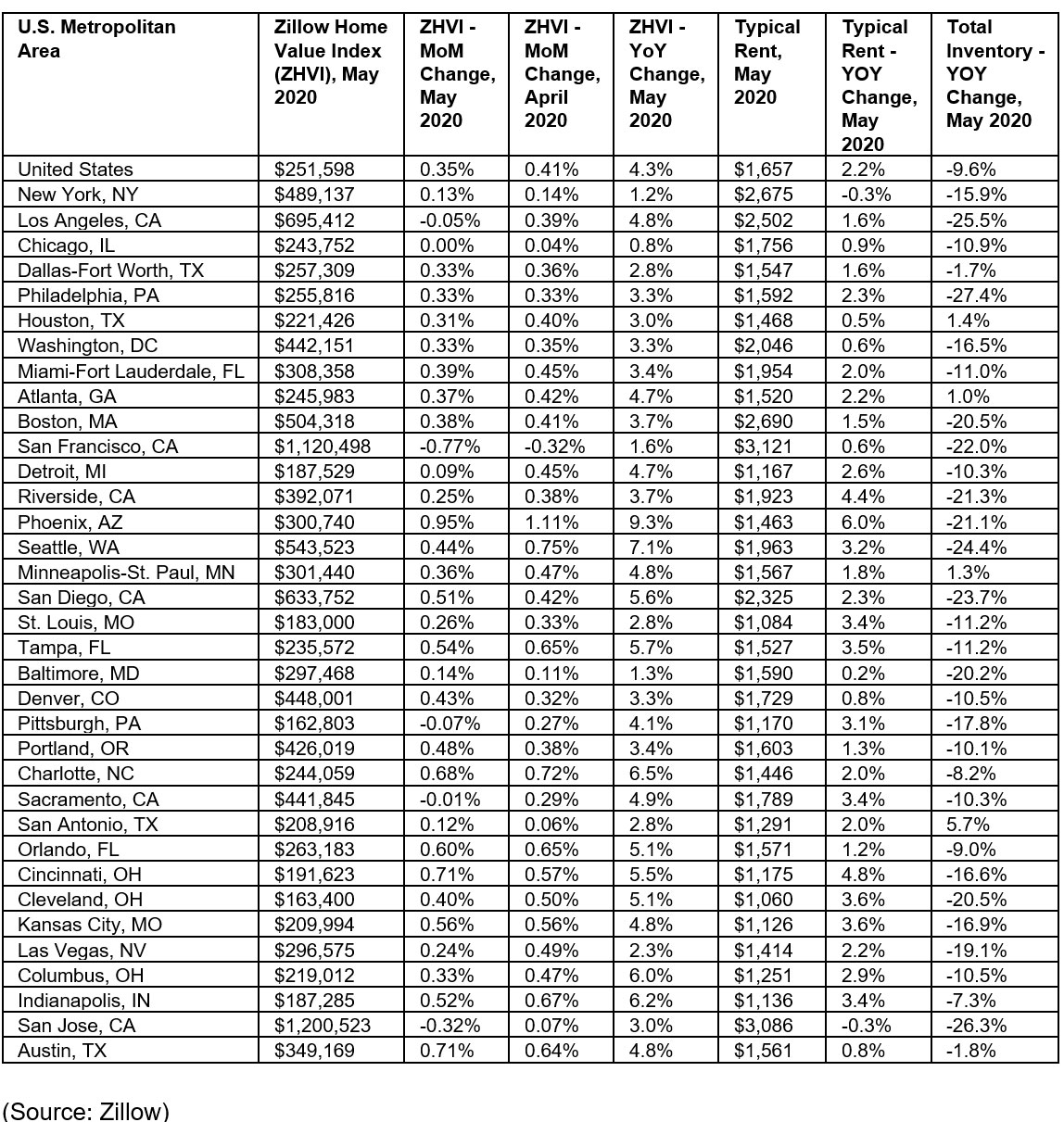