U.S. Homebuyers Migrating Away from Large Coastal Cities in 2021

According to new CoreLogic data, U.S. homebuyers relocating to another metro were often choosing metros that are either adjacent to their current location, had a lower cost of living, or both.

Homebuyers continued to seek affordable metros adjacent to their current place of residence. This is a trend that was observed in prior years and has persisted during the pandemic.

CoreLogic reports large coastal metros had higher outbound homebuying activity. New York experienced the highest net out-migration of homebuyers among all the metros over the last year, followed by Los Angeles, San Francisco and San Jose. The net out vs. in ratio was higher in all the top ten metros compared to the same period in 2019.

In contrast, Riverside, California, had the highest in-migration activity, followed by Lakeland, Myrtle Beach and Las Vegas. Los Angeles and San Diego had a net loss of potential homebuyers to Riverside. More than 29% of the overall applications in Riverside metro came from Los Angeles (compared to just 23% in 2019), mostly those seeking affordability. For example, the average home price in Los Angeles is more than double that in Riverside. Also note that while 40% of the applications came from non-Riverside residents, 60% of applications were from within Riverside.

When compared, the most expensive metros experienced the highest net out-migration and, in contrast, more affordable metros had net in-migration of homebuyers. Looking forward, as affordability seems to be an important consideration for a homebuyer, we are likely to see more applicants moving to less expensive markets in the near future, concludes CoreLogic. 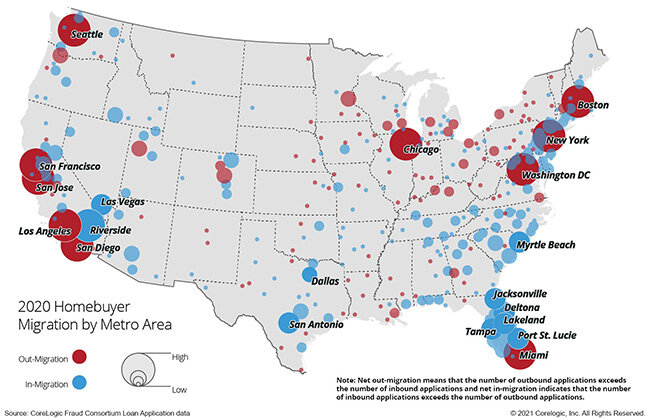