Email Sign Up For Our Free Weekly Newsletter
According to new research from Redfin and LinkedIn, Charlotte, North Carolina and Buffalo, New York are among the best metro areas for software engineers to buy a home.
Both metros saw 4.1 percent year-over-year job growth in June for people in the field, and the typical software engineer would only need to spend 18.9 percent and 13.3 percent of their annual income, respectively, on housing. In comparison, the typical software engineer in San Francisco would need to spend 42.8 percent of their annual salary to afford a median-priced home.

The two metros are more affordable options than tech hubs like San Francisco and Silicon Valley, where despite generous salaries and job growth of roughly 3.5 percent year-over-year, sky-high housing costs make homeownership difficult for typical software engineers. The typical home in the San Francisco metro sold for more than $1.4 million in July, out of reach for someone earning $186,300, the median income for a software engineer in the Bay Area.

"Because homeownership in expensive places like San Francisco is no longer a realistic consideration even for many people in high-paying fields, smaller inland cities are becoming increasingly attractive to young, educated people looking to build a career and live comfortably," said Redfin chief economist Daryl Fairweather. "Grand Rapids and Columbus don't offer as many job opportunities or salaries as high as you'd find in San Francisco, but because housing and other costs are so much lower, skilled professionals can achieve a higher quality of life. Tech companies are following the talent by opening offices or offering the option for employees to work remotely--which is contributing to growth in job opportunities for people seeking affordable housing."

Based on those parameters, software engineers may want to consider a move to Charlotte, North Carolina or Buffalo, New York rather than Silicon Valley. Some other places to consider are Grand Rapids, Michigan, Colorado Springs and Columbus, Ohio, areas with 3-percent-plus job growth where the typical software engineer would need to spend 20 percent or less of their income on housing. Seattle, where home prices have more than doubled over the last seven years partly due to its growth as a tech hub, is still relatively affordable for people in the field. The typical Seattle software engineer would need to spend 20 percent of their earnings to buy a home in the metro, comparable to the share in Colorado Springs. 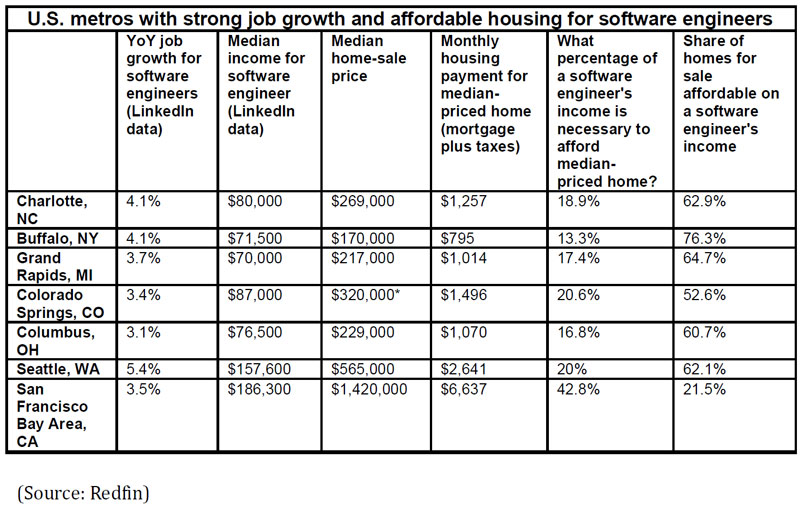