Most Affordable U.S. Cities to Get Married and Buy a Home Revealed

According to Redfin, Cleveland, Detroit and Pittsburgh are the most affordable places where couples can throw a wedding and also cover a down payment on their first home. In all three Midwestern metro areas, the average combined cost of a wedding and a down payment is less than $65,000, compared with the national average of more than $109,000.

To determine how much cash couples in different parts of the country would need on hand to throw a wedding and buy their first home, Redfin calculated down payment amounts in 25 metro areas, assuming a 20 percent down payment on the median list price as of April 2019. Redfin paired it with metro-level and national data on wedding costs from WeddingWire, which found the average cost of a wedding, including an engagement ring, ceremony and reception, and honeymoon to be $38,700 in 2018.

In expensive coastal metros including Seattle, Boston and San Diego, a down payment alone costs over $100,000, without factoring in a wedding. For couples in these places with visions of a dream wedding, it might be worth spending the money on the party, considering it is roughly half the cost of a down payment, which may be far less attainable.
Even in relatively affordable housing markets like Phoenix, Minneapolis or Atlanta, a typical down payment is more than twice as much as an average wedding. If saving for a home is a priority of residents in these areas, skipping the big day and eloping to city hall might be a worthwhile strategy.

Ranking of the most affordable U.S. cities to have a wedding and purchase a home in 2019: 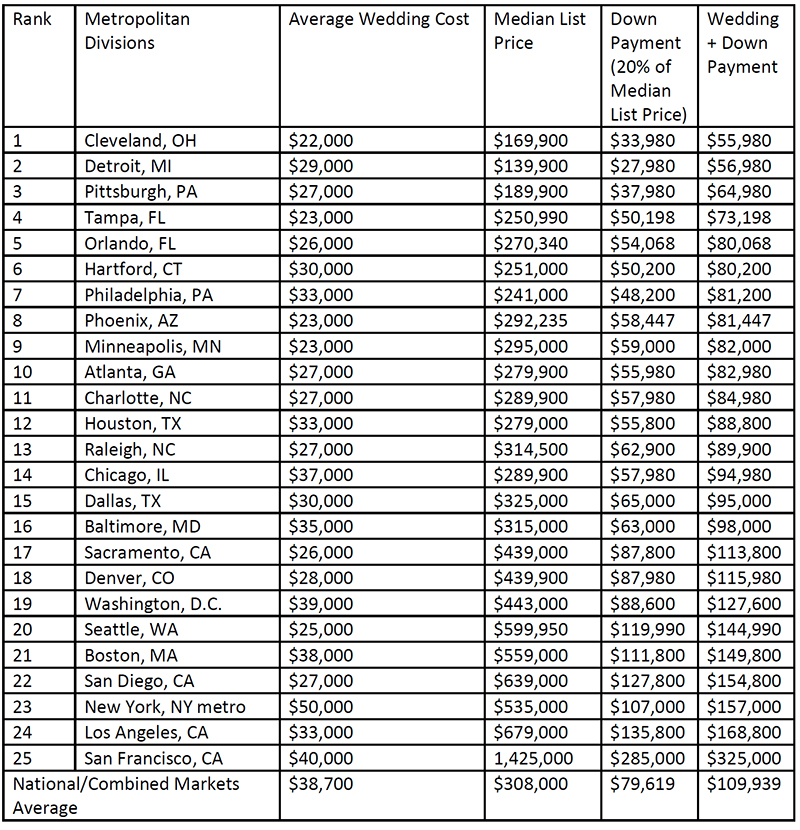