According to the National Association of Realtors, existing-home sales closed out 2016 as the best year in a decade, even as sales declined in December as the result of ongoing affordability tensions and historically low supply levels.

Total existing-home sales, which are completed transactions that include single-family homes, townhomes, condominiums and co-ops, finished 2016 at 5.45 million sales and surpassed 2015 (5.25 million) as the highest since 2006 (6.48 million).

In December, existing sales decreased 2.8 percent to a seasonally adjusted annual rate of 5.49 million in December from an upwardly revised 5.65 million in November. With last month's slide, sales are only 0.7 percent higher than a year ago.

Lawrence Yun, NAR chief economist, says the housing market's best year since the Great Recession ended on a healthy but somewhat softer note. "Solid job creation throughout 2016 and exceptionally low mortgage rates translated into a good year for the housing market," he said. "However, higher mortgage rates and home prices combined with record low inventory levels stunted sales in much of the country in December."

Added Yun, "While a lack of listings and fast rising home prices was a headwind all year, the surge in rates since early November ultimately caught some prospective buyers off guard and dimmed their appetite or ability to buy a home as 2016 came to an end."

Total housing inventory at the end of December dropped 10.8 percent to 1.65 million existing homes available for sale, which is the lowest level since NAR began tracking the supply of all housing types in 1999. Inventory is 6.3 percent lower than a year ago (1.76 million), has fallen year-over-year for 19 straight months and is at a 3.6-month supply at the current sales pace (3.9 months in December 2015).

"Housing affordability for both buying and renting remains a pressing concern because of another year of insufficient home construction," said Yun. "Given current population and economic growth trends, housing starts should be in the range of 1.5 million to 1.6 million completions and not stuck at recessionary levels. More needs to be done to address the regulatory and cost burdens preventing builders from ramping up production."

"Constrained inventory in many areas and climbing rents, home prices and mortgage rates means it's not getting any easier to be a first-time buyer," said Yun. "It'll take more entry-level supply, continued job gains and even stronger wage growth for first-timers to make up a greater share of the market."

On the topic of first-time- and moderate-income buyers, NAR President William E. Brown, a Realtor® from Alamo, California, says Realtors® look forward to working with the Federal Housing Administration to express why it is necessary to follow through with the previously announced decision to reduce the cost of mortgage insurance. By cutting annual premiums from 0.85 percent to 0.60 percent, an FHA-insured mortgage becomes a more viable and affordable option for these buyers.

Inventory data from Realtor.com reveals that the metropolitan statistical areas where listings stayed on the market the shortest amount of time in December were San Jose-Sunnyvale-Santa Clara, Calif., 49 days; San Francisco-Oakland-Hayward, Calif., and Nashville-Davidson-Murfreesboro-Franklin, Tenn., 50 days; and Billings, Mont., and Hanford-Corcoran, Calif., both at 51 days.

Existing condominium and co-op sales dropped 10.3 percent to a seasonally adjusted annual rate of 610,000 units in December, and are now 4.7 percent below a year ago. The median existing condo price was $221,600 in December, which is 5.5 percent above a year ago.

In the Midwest, existing-home sales decreased 3.8 percent to an annual rate of 1.28 million in December, but are still 2.4 percent above a year ago. The median price in the Midwest was $178,400, up 4.6 percent from a year ago.

Existing-home sales in the South in December were at an annual rate of 2.25 million (unchanged from November), and are 0.4 percent above December 2015. The median price in the South was $207,600, up 6.5 percent from a year ago. 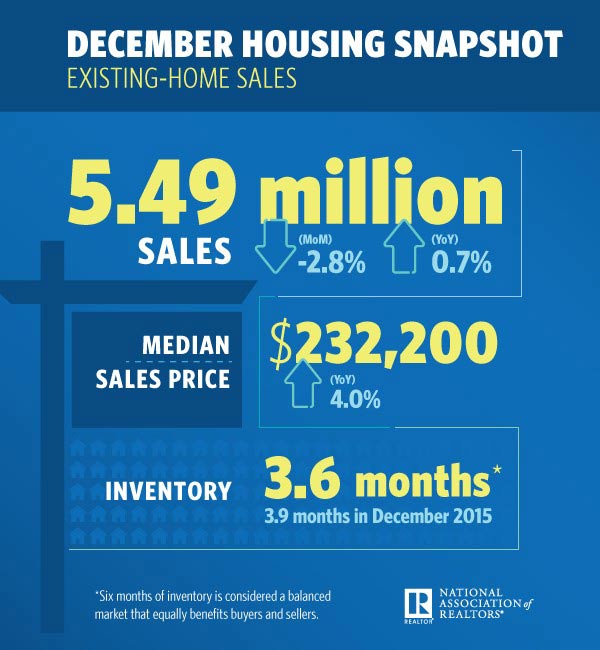