One day residents of Miami's Brickell Flatiron tower will awake each morning for cardio in the clouds and swimming above the sunrise. In a move that will create added value for the residents of Brickell Flatiron's 549 units, developer CMC Group has opened the 64-story tower's rooftop up to the entire building with the creation of a Sky Spa that will include a pool, spa and fitness center. The Sky Spa will be perched 736 feet above street level, several floors above the tower's penthouses, which are priced from $2 million and up.

Nearly 50 percent sold with construction set to begin this fall, Brickell Flatiron is on track to become the tallest all-residential building south of the New York market when it delivers in 2018, according to data published by the Council on Tall Buildings and Urban Habitat.

The tower marks the latest example of sky-high development in Miami's urban core, which is emerging as one of the country's most densely populated neighborhoods as billions of dollars in domestic and inbound investment transforms the area into a 24/7 residential and commercial district. Downtown Miami's population has more than doubled - from 40,000 to 80,000 people - since 2000, according to a recent study by the Miami Downtown Development Authority.

Developers like CMC Group are tapping into this growth with unique amenities that set their buildings apart and public spaces that foster a sense of community among residents while creating added value. As waterfront land in Miami runs scarce and developers increasingly turn to urban infill development, sky-high buildings and the panoramic views they offer are in high demand. All told, Miami's urban core is now home to 18 towers planned to rise in excess of 492 feet high, which is the threshold for skyscraper status.

"Downtown Miami's population growth and surge of vertical development is raising the stakes for the residential market," explains developer Ugo Colombo, founder of CMC Group. "We're proud that our past developments have some of the highest resale values in the market, and we credit much of that staying power to the unique public spaces we've created. Our Sky Spa at Brickell Flatiron will continue that tradition more than 700 feet above the city. Years down the road, the Sky Spa will still be a signature feature of the building and a key factor in the tower's enhanced value."

Brickell Flatiron's Sky Spa will include a rooftop pool, spa and fitness center - all with 360- degree views of Biscayne Bay and downtown Miami's cityscape. Residents will have access to therapeutic services with a host of other offerings, including private steam, sauna and locker facilities, as well as a 6,300 square foot gym featuring high-tech cardiovascular and weight training facilities, Pilates, yoga and an aerobics studio.

The Brickell Flatiron Sky Spa concept echoes the rooftop spa and fitness center at Santa Maria, one of CMC Group's previous developments, which opened 18 years ago just a few blocks south on Brickell Avenue. Santa Maria residents are treated to east-and-west-facing views from the waterfront tower's 51st floor and today, the building demands the highest resale values in the market with an average sale price of $857 per square foot.

Available residences include 1- to 5-bedroom units, including a limited collection of penthouse and duplex residences, measuring up to 6,220 square feet in size. All units will be fitted with all glass elliptical balconies, premium imported Italian finishes and professional grade German appliances. Preconstruction sales are currently underway, with prices averaging about $750 per square foot.

"At Brickell Flatiron, we cater to the kind of buyer who is willing to pay a premium for quality and timelessness," said Vanessa Grout, president of CMC Real Estate, the sales and marketing arm of CMC Group. "We're finding that buyers from around the world are looking for superior amenities that add to the value of a project over the long-term and have a positive impact on residents' everyday lifestyle." 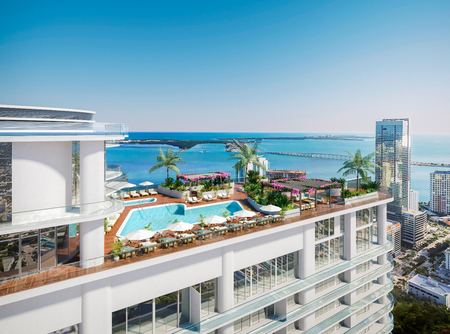 The tower's prime location at 1001 South Miami Avenue, just one block from downtown's bustling Brickell Avenue, provides residents a central location in one of the city's most dynamic urban districts. Dozens of high-end hotels, restaurants, cafes, lounges and luxury shops are just steps away, including The Shops at Mary Brickell Village and Brickell City Centre. Multiple public transit options such as the Metromover and Downtown Trolley are within walking distance, connecting Brickell Flatiron with Miami's star attractions, including Miami Worldcenter, American Airlines Arena, Adrienne Arsht Center for the Performing Arts, Perez Art Museum Miami and the Patricia and Phillip Frost Museum of Science, and Bayfront Park.