According to Standard & Poor's latest S&P Case-Shiller Home Price Index, the annual growth rates in 18 of the 20 MSAs are decelerating.

While the composite housing prices are still above their spring 2009 lows, six markets - Atlanta, Charlotte, Miami, Portland (OR), Seattle and Tampa - hit their lowest levels since home prices started to fall in 2006 and 2007, meaning that average home prices in those markets have fallen beyond the recent lows seen in most other markets in the spring of 2009. 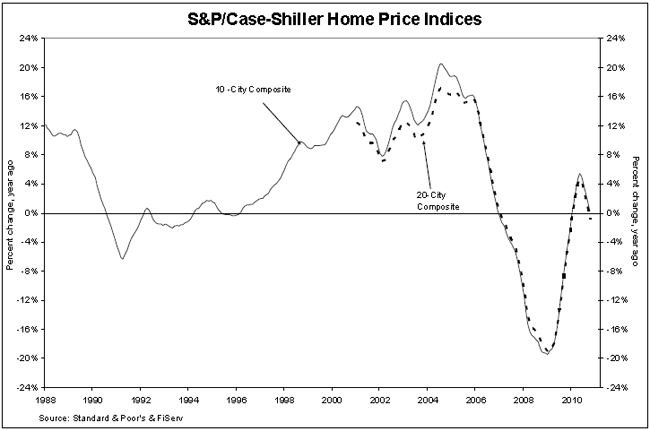 "The double-dip is almost here, as six cities set new lows for the period since the 2006 peaks. There is no good news in October's report. Home prices across the country continue to fall." says David M. Blitzer, Chairman of the Index Committee at Standard & Poor's. "The trends we have seen over the past few months have not changed. The tax incentives are over and the national economy remained lackluster in October, the month covered by these data. Existing homes sales and housing starts have been reported for both October and November, and neither is giving any sense of optimism. On a year-over-year basis, sales are down more than 25% and the months' supply of unsold homes is about 50% above where it was during the same months of last year. Housing starts are still hovering near 30-year lows. While delinquency rates might have seen some recent improvement, it is only on a relative basis. They are still well above their historic averages, in both the prime and sub-prime markets.

"Looking at the monthly statistics, all 20 MSAs and both Composites were down in October over September. While not always consecutive months, twelve of the MSAs and both composites have posted at least six months of decline since the beginning of 2010. In addition 15 MSAs and both composites have posted three consecutive months of decline with October's report; a further sign that the few months of positive print earlier this spring were only a temporary boost. The seasonally adjusted data tell largely the same story." 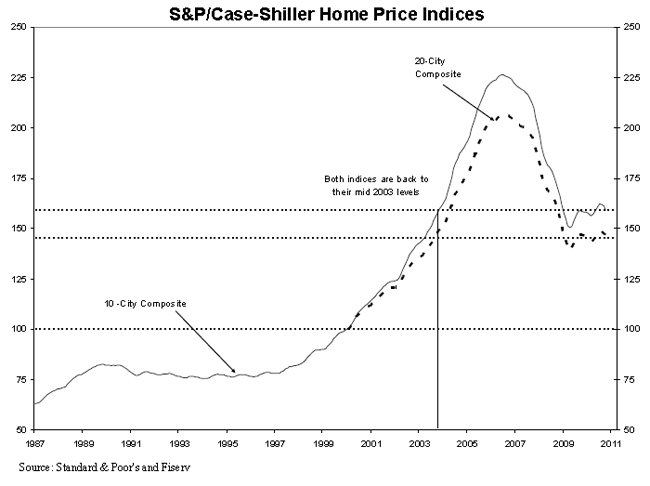 An October index level of 68.86 in Detroit indicates that average home prices are more than 30% below their January 2000 values. Las Vegas, Cleveland and Atlanta are just about back to their 2000 levels, with October prints of 100.97, 102.20 and 103.30, respectively. On a relative basis, Los Angeles, New York and Washington DC have fared best, retaining the most of their mid-2000 price appreciation. Each of these markets is more than 70% above their January 2000 levels. 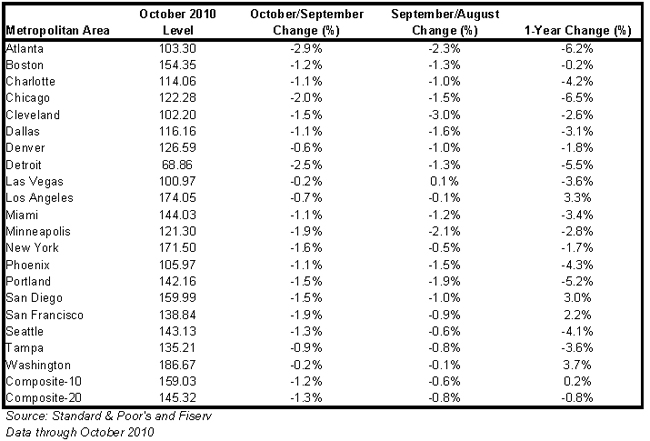