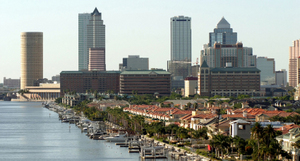 (ORLANDO, FL) -- According to the latest housing data from the Florida Association of Realtors, Florida's existing home and existing condo sales continued to show gains in October.

"Statewide, both sales and prices are above where they were this time last year," noted Florida Realtors Chief Economist Dr. John Tuccillo. "The monthly median prices have ticked down slightly for the past few months, but the overall trend continues to show gains year-over-year.

"These numbers, combined with reports from Realtors throughout the state, indicate that we're seeing strong interest in purchasing Florida real estate from smart investors who are taking advantage of the current favorable market conditions," Tuccillo said. "These folks tend to have a long-term outlook and plan to hold onto their property purchases for a while."

The statewide median sales price for existing homes last month was $131,200; a year ago, it was $136,600 for a decrease of 4 percent. According to analysts with the National Association of Realtors (NAR), sales of foreclosures and other distressed properties continue to downwardly distort the median price because they generally sell at a discount relative to traditional homes. The median is the midpoint; half the homes sold for more, half for less.

In Florida's year-to-year comparison for condos, 6,132 units sold statewide in October, a 12 percent increase over the 5,473 units sold in October 2010. The statewide existing condo median sales price last month was $87,800; a year earlier, it was $80,500 for a 9 percent gain. The national median existing condo sales price in September was $163,800, according to NAR.

"The latest unemployment figures indicate that Florida's jobs outlook is improving, mortgage rates remain at historical lows and buyers are able to consider a variety of housing options at affordable prices in communities across the state," said 2011 Florida Realtors President Patricia Fitzgerald, manager/broker-associate with Illustrated Properties in Hobe Sound and Mariner Sands Country Club in Stuart. "This is a great time to consult a local Realtor about homeownership opportunities in your local housing market."

According to Freddie Mac, the interest rate for a 30-year fixed-rate mortgage averaged 4.07 percent in October, down from the 4.23 percent average during the same month a year earlier. Florida Realtors' sales figures reflect closings, which typically occur 30 to 90 days after sales contracts are written.