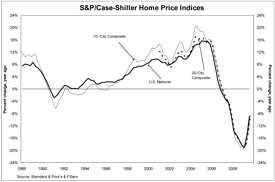 
(NEW YORK, NY) -- Data through September 2009, released today by Standard & Poor's for its S&P/Case-Shiller Home Price Indices show that the U.S. National Home Price Index improved in the third quarter of 2009, posting its second consecutive quarterly increase and further improvement in its annual rate of return. 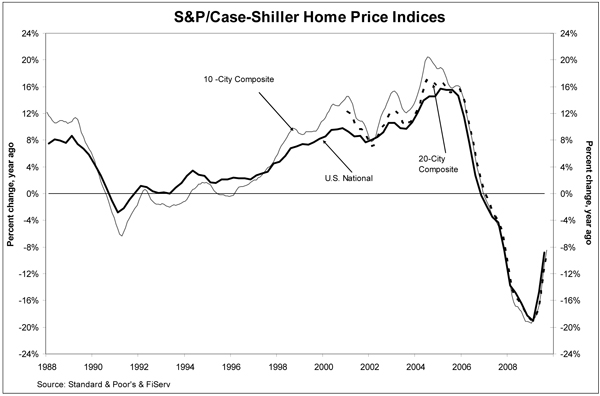 The chart above depicts the annual returns of the U.S. National, the 10-City Composite and the 20-City Composite Home Price Indices. The S&P/Case-Shiller U.S. National Home Price Index, which covers all nine U.S. census divisions, recorded an 8.9% decline in the third quarter of 2009 versus the third quarter of 2008. This is a marked improvement over the 14.7% decline in the annual rate of return reported in the second quarter of 2009, and the 19.0% drop in the first quarter. The 10-City and 20-City Composites recorded annual declines of 8.5% and 9.4%, respectively. These two indices, which are reported at a monthly frequency, have generally seen improvements in their annual rates of return every month since the beginning of the year.

"We have seen broad improvement in home prices for most of the past six months," says David M. Blitzer, Chairman of the Index Committee at Standard & Poor's. "However, the gains in the most recent month are more modest than during the seasonally strong summer months. Fewer cities saw month to month improvements in September than in August in both seasonally adjusted and unadjusted figures.

Nationally, the U.S. National Composite rose by 3.1% in both the 2nd and 3rd quarters of 2009. Both the 10-City and 20-City Composites posted their fifth consecutive monthly increase with September's report. Earlier some analysts voiced concern that the end of the first-time home buyer program would result in a drop in activity. While housing starts did slip in October, the federal government recently extended and expanded the first-time homebuyer tax credit." 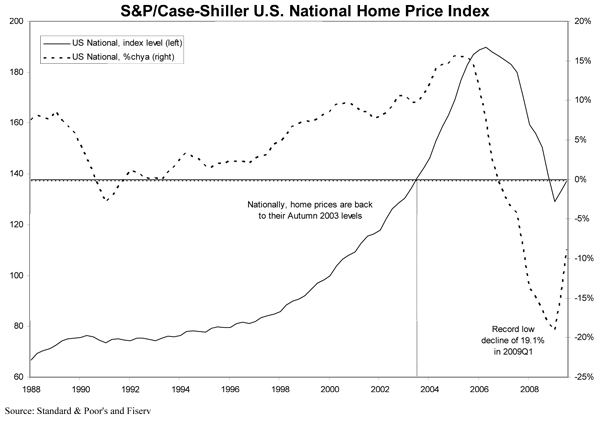 The chart above shows the index levels for the U.S. National Home Price Index, as well as its annual returns. As of the 3rd quarter of 2009, average home prices across the United States are at similar levels to what they were in autumn 2003. The 3rd quarter values show improvement over the previous two quarters of 2009 and have risen well off their recent bottom.

San Francisco and Washington DC have reported six consecutive months of positive returns. Chicago, Minneapolis, San Diego and the two Composites were close behind with five consecutive months of positive returns. In addition to the two Composites, nine of the MSAs reported positive monthly returns for September and four of those -- Chicago, Detroit Minneapolis and San Francisco -- were greater than +1.0%.

Las Vegas remains the most depressed market. Prices have declined for 37 consecutive months, with a peak-to-trough reading of -55.4%. While Detroit has seen some positive movement in recent months, the market is still at only 73% of its 2000 value. This compares to regions such as Los Angeles, New York and Washington, which have maintained values of 70-80% above their 2000 averages, in spite of the market downturn.

The table below summarizes the results for August 2009. The S&P/Case-Shiller Home Price Indices are revised for the 24 prior months, based on the receipt of additional source data. 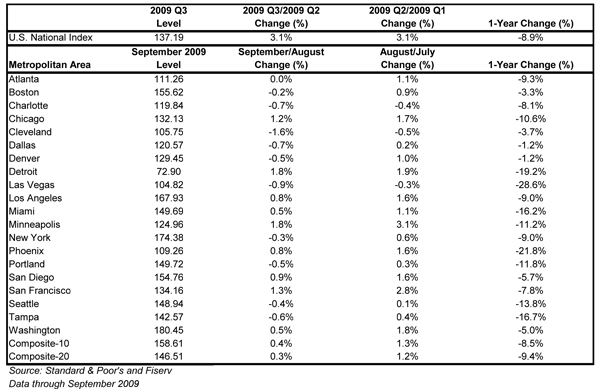 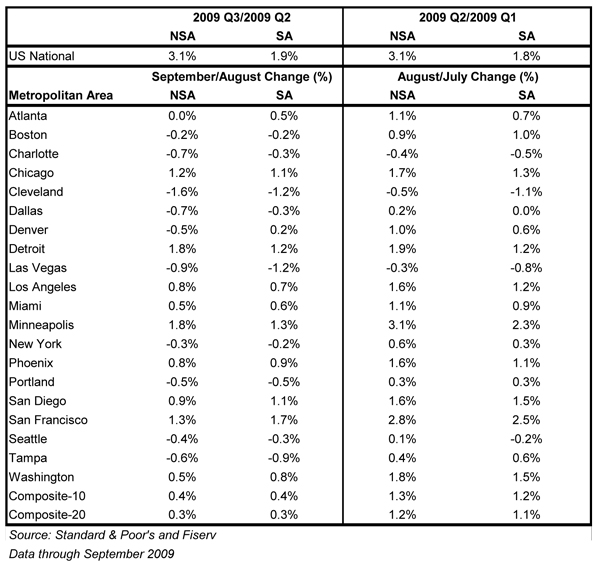