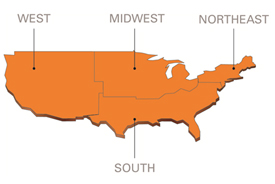 Are Weaker U.S. Housing Markets Heading for a 'Big Chill' This Winter?

"Compared to the softening quarterly gains we saw last month, the latest results of our Home Data Index indicate a substantial price correction has taken place in many major markets," said Dr. Alex Villacorta, Senior Statistician, Clear Capital. "With the effects of the recession still being felt by home buyers and sellers, the lack of demand is causing strong markets to lose their upward momentum, while sending weak markets into double dip territory. National prices are still 10 percent above their 2009 lows, so the risk of new record lows this year remains small."


Dr. Villacorta further commented, "The recent halt of foreclosures by the top mortgage servicers will certainly help to slow the rate of new distressed inventory on the market, but any positive effect this will have on the market will be countered by the traditional winter slowdown that seems to be starting early this year." 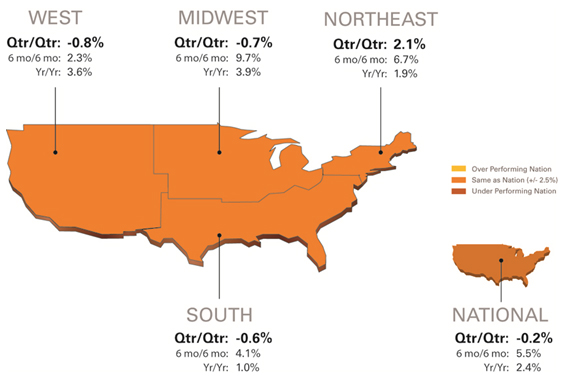 
The mix of uninspiring economic conditions and weak post tax credit demand contributed to renewed price volatility, with shorter-term quarter-over-quarter changes swinging downward at the national level from last month's 5.7 percent gain to this month's -0.2 percent change. All four regions retained their year-over-year price gains, but this slowdown appears likely to mark an early onset to the typically weak markets of fall and winter.

The current rolling quarter-over-quarter snapshot offers a good comparison between purchases made during the tax-credit program to the transactions made after the end of tax credit program. While home prices are now accompanying the downward trend in sale volumes, the effects on distressed and fair market segments of the market have been roughly the same. Even though the national REO saturation rate did trend upward 1.1 percent from last month's report, this is a modest increase in light of the larger price movements. Historically, REO saturation rates peaked in the first quarter of 2009 at 41 percent but have since descended to the current 23.2 percent level. With several of the largest mortgage servicers currently halting foreclosures, REO saturation rates are likely to continue to drift lower in the near term. The lack of overall demand, however, will prevent any significant reductions in the overall saturation. In the long term, it's probable the current moratoriums will add to the backlog of distressed inventory, ultimately placing more pressure for REOs to be released into the market. 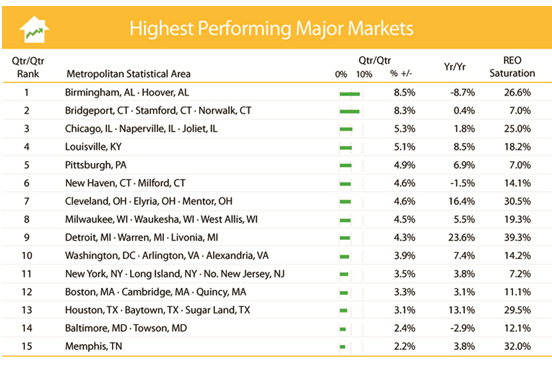 
The home pricing slowdown from the federal tax credit highs was broadly experienced among the highest performing major markets, as quarter-over-quarter price gains deteriorated in fourteen of the fifteen markets compared to last month's report (Houston, Texas, was the exception).

With the federal tax credit concluded, these markets are correcting some of the gains that came with the rush to purchase under that program and are settling back to pre-tax cut conditions. The Midwest and South regions contain lower-priced homes more susceptible to incentives, so we are likely to see greater effects; while the higher-priced East and West regions should see more muted movements. 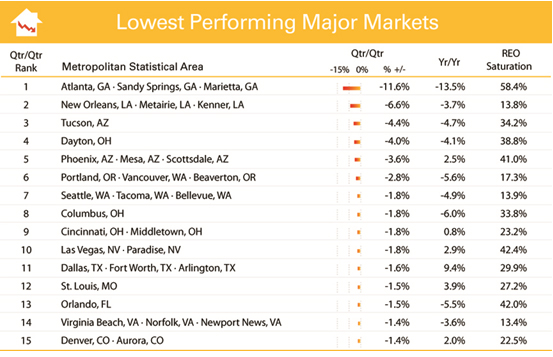 All Markets Back in Negative Territory


With the growing number of markets now showing a downturn in home prices, REO saturation is moving upward as well. In markets where REO saturation influences are returning, prices are likely to suffer disproportionately from the national trend in upcoming months--possibly pushing these markets into double-dip territory.

Note the return of quarterly price volatility has moved all five California markets (Riverside, San Diego, Fresno, Los Angeles, and Sacramento) listed last month up and out of this set. This is consistent with the more stable results Western markets have experienced over the last two months. Further, the seven California markets considered for our highest and lowest performing markets lists (including San Francisco and San Jose), averaged a 0.0 percent quarterly price change and an 8.6 percent yearly price gain.

Following home price gains leading up to the November 2009 tax credit, the Providence MSA has remained relatively stable over the last nine months. With prices up 9.7 percent for the year, residents in much of this market are likely to feel some relief following the 52.1 percent decline in prices that occurred from mid 2006 to early 2009. REO saturation has also fallen during this period, currently at 13.5 percent.

As home prices fell over the past three years, homebuyers have found some of the surrounding suburban areas an attractive alternative to downtown areas. An example of this is in the western portion of the suburb of Cranston (ZIP 02920). Cranston, the best performing ZIP code in this MSA, has experienced a 13.2 percent yearly gain in home prices and currently has an 11.4 percent REO saturation rate. As prices declined 37.4 percent from the market peak in late 2005 to today, this largely residential area has grown attractive, boasting easy access to Interstate 95 and Interstate 295. While the higher-priced segment of this market (homes over $217,500) has missed out on these recent gains, the moderate-to-lower-priced segment has benefitted from the recent tax credits as buyers look outside the downtown area for affordable deals.

Conversely, just south of Cranston lies the suburb of Warwick (ZIP 02886). Sandwiched to the north by the airport and to the south by Greenwich Bay, this area maintains almost double the REO saturation rate (20.3%) of Cranston. Warwick also experienced a -20.7 percent price change in home prices over the last year, making this area the worst performing market in the Providence MSA. Local real estate experts report home sales in Warwick are suffering due to more desirable nearby locations. Warwick is also farther from downtown, close to the airport, and scattered with light industrial complexes. The southern area of Warwick near the bay has also faltered partly because the area, historically attractive to second home-buyers, is proving less marketable given the current economic conditions and recent incentives geared toward primary residences. 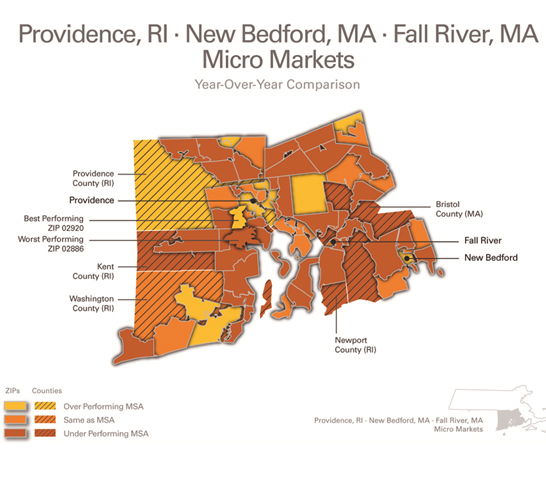