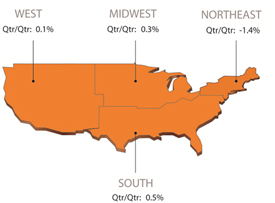 
(TRUCKEE, CA) -- Clear Capital today announced their Home Data Index (HDI) Market Report that shows home prices have remained positive through the first two months of the year despite all the negative economic news and threat of more REOs hitting the markets.

"Although many markets have seen a slow down in price gains, I'm encouraged that prices have remained positive through the first two months of the year despite all the negative economic news and threat of more REOs hitting the markets," said Dr. Alex Villacorta, Senior Statistician, Clear Capital. "If the increase in demand that preceded the end of the last tax credit is any indication, home prices may dip only slightly into negative territory before getting an added boost before the April tax credit deadline."


"We observed an expected increase in REO saturation this month as the flow of foreclosures continued to come into the market, while traditional non-distressed sales wait to be listed in the spring and summer months," added Villacorta. 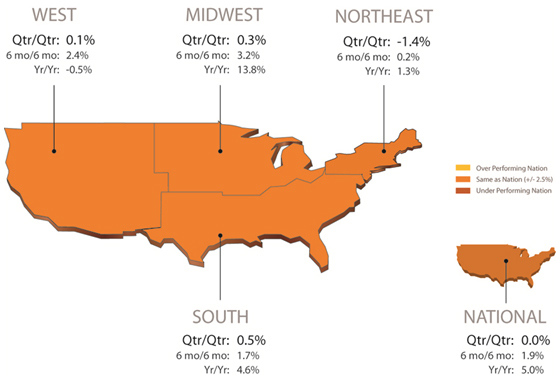 This month's national year-over-year home price gains (5.0%) speak favorably to the improved market picture today compared to the first months of 2009 in which the availability of credit was limited, nearly all investments were rapidly losing value, and REOs flooded the market as institutions faced the risk of failure.

Steeply discounted REOs became attractive to investors and new home buyers with the stabilization of credit and subsequent bailouts, renewed gains in some segments of the market, and the offering of homebuyer tax credits. While the current inventory of short sales is significant and feeding concerns over shadow inventories, demand for discounted REOs has buoyed prices well into winter -- and should continue through the end of the current tax credit. This demand has been muted, however, by a slowdown in winter sales, pushing the current quarterly national gain flat (0.0%). Amid this current slowdown, REO saturation rose to 26.1 percent, a 1.3 percent increase over last month.

While the risk of additional inventories arriving later in 2010 should not be discounted, this inflow might arrive with a stronger springtime and summer buying season, helping to ease the shock as initial inventories feed into what could be a potentially competitive marketplace for REOs. 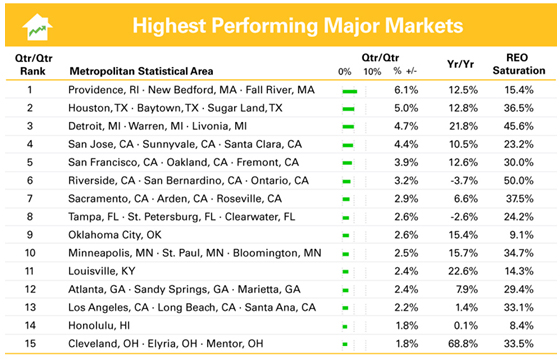 Providence, R.I. - the second highest performing major market from last month - rose to the top of the list as Detroit, Mich. saw its previously elevated gains decline 9.9 percentage points, to a smaller 4.7 percent price change for this rolling quarter.

All of this month's highest performing markets - with the exception of Cleveland, Ohio - improved their yearly results compared to last month, and maintained positive quarterly gains. Despite the positive signs in the yearly results, the quarterly slowdown seen at the national level was exemplified among the highest performing markets with gains decreasing by an average of 2.5 percentage points compared to last month. Three MSAs - Honolulu, Hawaii; Houston, Texas; and Tampa, Fla. - did manage increased quarterly gains over last month, however, improving 2.0, 2.9 and 0.2 percent points, respectively. With other MSAs experiencing smaller quarterly gains, the Los Angeles, Calif. MSA managed to hold relatively stable compared to last month, allowing it to move up to thirteenth on this month's list. Including Los Angeles, California markets comprised one-third of this month's list.

Also of note, REO saturation edged up in eleven of the fifteen markets this month by an average of 1.3 percent. However, the large glut of the much discussed shadow inventory has not yet flooded the market, hinting that the banks are being very circumspect in how they release inventory. 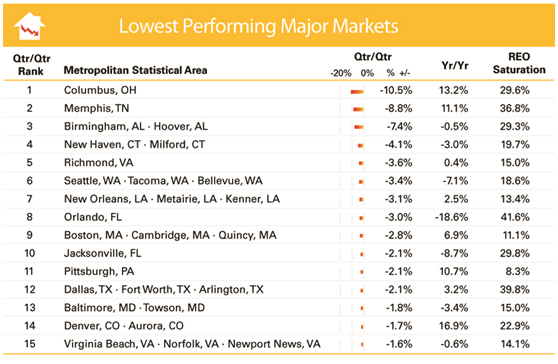 Yearly price gains extended among the lowest performing major markets, with eight markets returning positive gains compared to six on the list last month. However, quarterly prices continue to slide and REO saturation has started to increase among all but one of the markets (Baltimore, Md.). Columbus, Ohio, saw the highest month-over-month rise in REO saturation (4.3 percent)--contributing to its rise to the top of the list.

The Boston MSA, one of the first major markets to see prices drop at the beginning of the downturn, saw prices start falling in 2005--nearly a year ahead of the national decline. Between Boston's micro markets peak in mid-2005 until early 2009, home prices dropped 37.2 percent. Today, home prices have recovered 6.9 percent over last year's numbers, helping reduce the total loss from the market's peak to -28.6 percent. During the downturn, the Boston area has still been prone to seasonal price swings and has managed one quarterly gain each year, albeit very slightly sometimes--an important consideration when making financial decisions in this marketplace.

Lynn, Mass. (ZIP code 01902) offers an example of how the strong gains of mid-to-late 2009 are prevalent in some of Boston's hardest hit urban areas. Home prices in Lynn fell 62.7 percent by May of 2009 from the market's peak. But over the last year, Lynn's 21.8 percent price change has outperformed the Boston area as buyers have shown interest in Lynn's steeply discounted homes. As a lower priced area with ample variety of homes and an industrial base, Lynn is subject to the market's volatility, both down and up, that frequently comes along with investor activity and more affordable housing.

With a -11.7 percent price change this past year, the northern outskirts of Dracut, Mass. (ZIP code 01826) have underperformed the Boston area. However, contrary to Lynn, Dracut has actually outperformed the greater Boston area since 2005, posting a price change of -27.8 percent. Dracut has benefited from the influences of newer local development, which seem to add a level of supply and pricing regulation to the market as developers maintain some control over pricing while holding inventory. While apparently missing out on the immediate price gains experienced in Lynn, Dracut's home prices haven't been as volatile during the downturn and could see a paced recovery in the future. 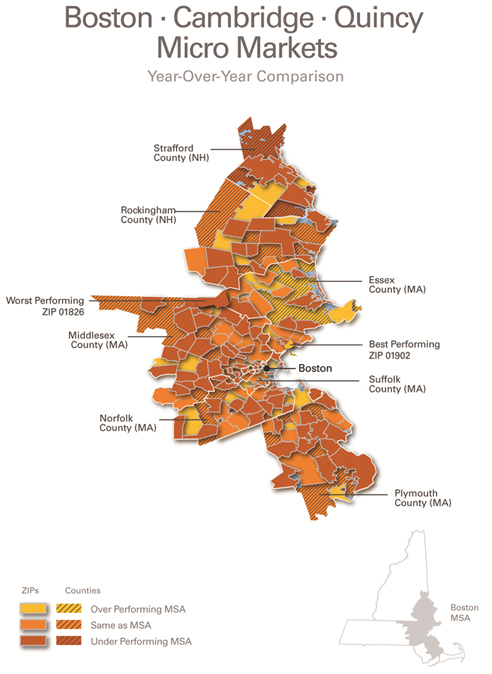