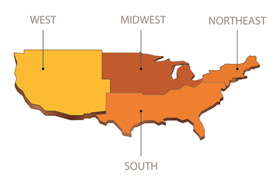 "At the national level, we are now seeing a return to quarterly price declines after nine months of quarterly gains," said Dr. Alex Villacorta, Senior Statistician, Clear Capital. "Although yearly price changes remain positive compared to last winter's lows, the most recent declines reflect the fragile and volatile state of many housing markets and could signal a trend to renewed lows off last year's levels for several markets."

"The 2.8 percent national increase in REO saturation is also a concern, yet the prevalence of REOs is having a mixed effect on price trends at local levels," added Villacorta. "For example, nearly all of the major markets in California are showing positive quarter-over-quarter growth, while some of the Midwest markets, like the metro areas of Ohio, are now reaching double-digit declines with more than one-in-three homes being sold as REO in both states. This example highlights the disparity among markets, especially with regard to how they respond to increased REO inventory - some areas will double dip, some will rebound." 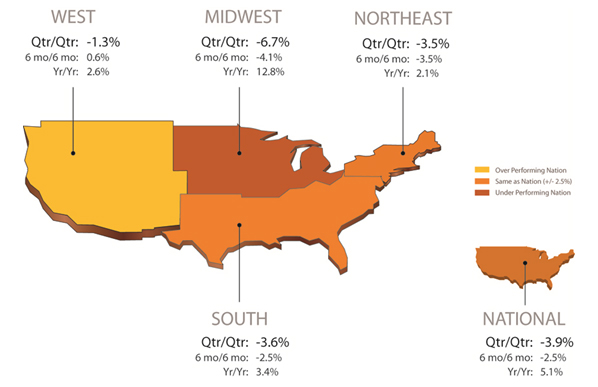 Quarterly prices changed -3.9 percent for the Nation this month, producing the first quarterly loss since June 2009. While still an improvement over the double digit declines seen during the winter of 2009, the loss was significant enough to limit yearly gains to 0.1 percent over last month's reported number, leaving prices up 5.1 percent from this time last year. REO saturation continued last month's trend, rising 2.8 percentage points to 28.9 percent, as slowing sales continued to magnify REO influences.

Although all four U.S. regions transitioned to positive year-over-year price gains for the first time since spring of 2006, this milestone was tempered by the return of quarterly price declines. The volatile Midwest lead the quarterly decline with a -6.7 percent price change, followed by the South (-3.6%), Northeast (-3.5%) and West (-1.3%). The West region saw the smallest quarterly decline and has recently proven the most resilient, showing pricing strength among its significant REO segment as demand from investors and new home buyers helped the region shrug off any potential seasonal slowness.

The 5.1 percent national year-over-year gain reported today reflects how far we've risen since home prices hit their lowest mark one year ago. Before the summer season arrives, we'll likely see reduced national yearly numbers again as we start to compare this year's price changes to the price run-up that started late in the spring of 2009. However, to be called a true "double dip," price declines must extend through the typical spring and summer seasonal lifts and set new record lows. 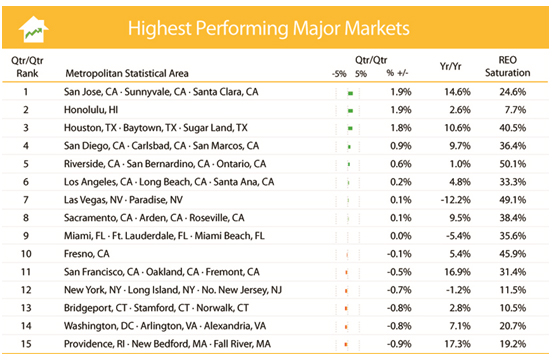 Major markets in the West continue to expand their presence in the Highest Performing Major Markets list.  With the addition of San Diego and Fresno almost half the highest performing markets are from California, which saw its REO saturation rates rise from last month by an average of 1.1 percent.  Much of California's resilience to recent negative price pressures can be attributed to a relatively healthy demand by investors and first time home buyers looking to get into the desirable California market.

With the aim of jumpstarting new home sales, the recently passed California homebuyer tax credit creates an incentive for homebuyers to purchase pending construction. However, this measure could encourage homebuilders to release additional inventory into an already saturated market, potentially hindering sales of existing inventory. The net effect whether the credit will increase demand more than the added inventory is yet to be seen.

All the major markets on this month's list saw negative price changes compared to last month, with the exception of Honolulu, Hawaii, which saw a 0.1 percent gain. These waning quarterly prices remain in contrast to increased yearly gains, and continue to reflect seasonal softening in the marketplace. 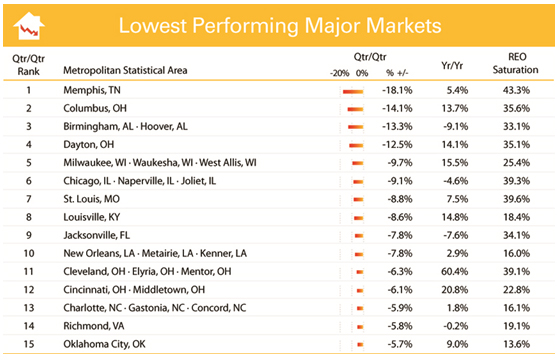 The broad deterioration of quarterly prices (down an average 9.3%) and rising REO saturation rates (up an average 5.2 percentage points from last month) on the Lowest Performing Major Markets list are generally concentrated in areas more prone to slowing winter sales rather than the largest distressed markets. The presence of REOs has made these markets more sensitive to seasonal volatility, accelerating the reshuffling of the already transient quarterly rankings. These markets, which earlier saw price gains driven by investor and new buyer demand for discounted REOs, are now swinging downward amidst reduced seasonal sale volumes of non-REO properties. Notable omissions this month's list are the previously troubled states of California, Nevada, Arizona and (except for Jacksonville) Florida.

The Minneapolis area saw prices decline nearly fifty percent (-49.1%) since its market peaked in late winter of 2006 and, despite recovering 10.4 percent of this loss in the latter half of 2009, returned to quarterly price declines this winter (-3.6%).

North Minneapolis (ZIP code 55412) remains prone to volatile prices swings. Investor-driven price gains helped push this market to a peak in early 2006, only to see prices in the area drop 83.2 percent by the start of 2009. This steep price decline, combined with elevated REO saturation rates (greater than 60% over the last year) and general unattractiveness of the area, must be taken into account when considering the 64.6 percent price increase north Minneapolis experienced over the last year (the largest gain of any of the Minneapolis micro markets).

Southwest of downtown Minneapolis (ZIP code 55410) stands out for its stable home prices in an otherwise volatile metropolitan area. This micro market is primarily comprised of single family residences and is located near the higher demand areas of Lakes Calhoun and Harriet. It has remained free from many of the extreme declines seen throughout the Minneapolis area, experiencing a price change of only -17.4 percent between 2006 and early 2009. While this micro market's -9.9 percent price change makes it one of the poorest performers over the last year, ZIP code 55410 boasts home prices that are only a modest 13.0 percent lower than at its market peak. The ability of this market to remain stable in both good and bad times reflects the strong homeowner base of this attractive neighborhood. 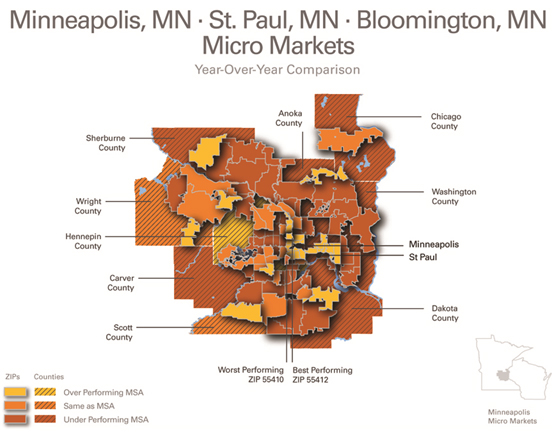