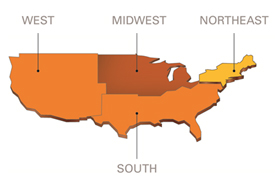 "Although nationally, price trends are showing significant decreases, it is critical for policy makers, investors, and other users of home price data to understand that price dynamics at local levels differ significantly from the macro trends," said Dr. Alex Villacorta, Senior Statistician, Clear Capital. "Our Home Data Index is unique in its ability to provide timely insight across price tiers―at both national and local levels."


"For example, all six major metropolitan areas in California are out-performing both national and West region numbers in terms of yearly gains," added Villacorta. "Conversely, four of the top markets in Florida are either in or very near double-dip territory, even though national prices remain nearly eight percent above 2009 lows. So, while national home price trends gauge overall home price movement, regional, metro and local housing markets will continue to respond differently to distressed inventories and national policy." 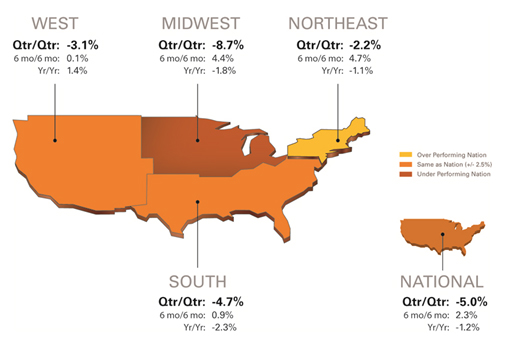 
Looking closer at national quarterly pricing trends, 18 states have declines higher than five percent, while 29 states experienced quarterly price changes that outperformed the national mark. This is significant because even though a majority of the states outperform the nation, declines in those 18 states are so severe that it brings the overall market average down.

In contrast to the national price changes, local markets often tell a different story. When studied at a much more granular, local level, the view was not always bad; yet in select cases, much worse. Several of the larger markets in the West region continue to maintain positive yearly price gains well above the national average. Similarly, Northeastern economic centers have outperformed the national quarterly trend, managing to delay a return to quarterly declines. The lower cost areas of the Midwest have largely underperformed the national trend while the South is mixed, with both over-performing and under-performing markets. Given the local nature of real estate, these differences were not surprising.

Another example of how national numbers can differ from local markets is by looking at where we are as a nation related to facing a double dip in home prices (home prices that drop below their record lows at the worst of the housing market crash are considered to have "double dipped"). Although nationally, we remain 7.7 percent above double dip territory, six local markets are presently experiencing a double dip.  Atlanta, Ga., Birmingham, Ala., Portland, Ore., Seattle, Wash., Tucson, Ariz., and Virginia Beach, Va. have all recently broken through for new home price lows. But those markets aren't the only ones suffering. Fourteen additional markets are within five percent of double dip lows; and another seven are within 10 percent of fresh lows. 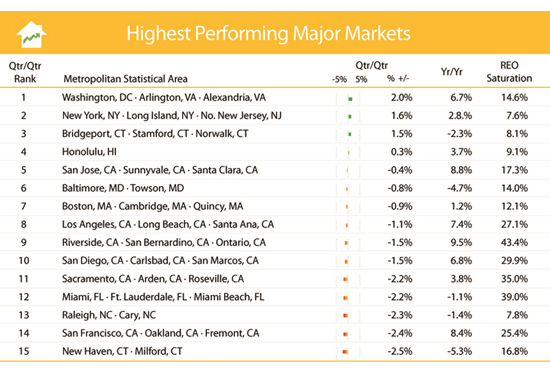 Select Local Markets Say "No" to Price Declines, For Now


Contrary to the national downward trend for home prices, two-thirds of this month's highest performing markets remained in positive year-over-year territory. This trend is an example of how important it is to receive and inspect local market information, and not just rely on national and regional level information.

In addition to the employment centers of Washington, D.C. and New York City, local markets out West show the benefit of last year's steady demand in the distressed segment, maintaining average positive yearly gains of 6.9 percent. The South region was also represented by the coastal markets of Baltimore, Md., Miami, Fla. and Raleigh N.C. No Midwestern markets made this month's highest performing markets list.

While the effect of deteriorating conditions was evident with both quarterly and yearly measures slowing across all markets, the performance of these markets remain well above the national average. The top four markets on the list avoided quarterly price declines altogether, and even New Haven, Conn. (no. 15 on the list), experienced only a price change of -2.5 percent (half the national rate of decline) for the quarter. 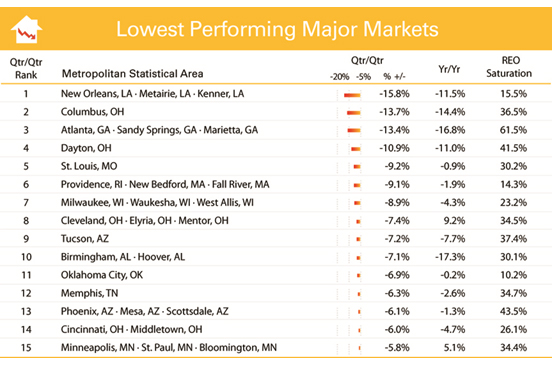 
Similar to the highest performing major markets, local prices in the lowest performing markets differ greatly from the national numbers and sometimes their own region―telling an even grimmer tale of home price declines. These markets have proven more sensitive to the current market forces; with several markets experiencing quarterly declines more than double the national rate. Many consist of lower-priced markets that reacted positively to the tax credits of the last eighteen months, and are now giving back the short term gains, and then some.

While regional trends do provide a broad measure of the market, exceptions are the norm. Phoenix, Ariz., for example, saw a return to price declines in excess of the national and regional quarterly benchmarks. Prices in Phoenix dropped 6.1 percent for the quarter, and 1.3 percent for the year. Milwaukee, Wis., Tucson, Ariz., Birmingham, Ala., and Minneapolis, Minn. also saw REO saturation rates increase by more than three percentage points. Of these four markets, all but Minneapolis saw price declines in both quarterly and yearly measures.

This section highlights a single market every month with a deeper dive into how the micro- and macro-markets relate to each other, providing additional sub-ZIP code, census-tract-level data. 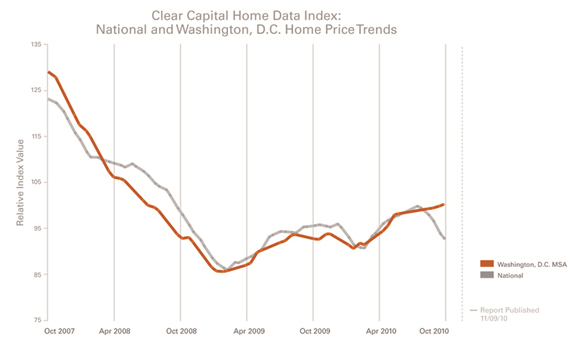 
Regional, metro and even local housing markets respond differently to various economic conditions--and should be scrutinized carefully. Over the past three years, Washington, D.C. has tracked closely with the national home pricing trend, matching the price troughs in early 2008 and 2009. However, historical agreement doesn't necessarily assure similar direction or timing going forward. The District's 2.0 percent quarterly price change has extended by more than two months beyond the national trend where prices have fallen.

"The greater Washington, D.C. market might be doing better than the rest of the country because of its proximity of the federal government, and the solid job base for companies doing business for the government," said Ben Puchalski, real estate sales agent from Washington, D.C. "The tax credit definitely eliminated some of the inventory problems in D.C., but we've seen a slow down since it ended."

Within the Washington, D.C. MSA, which overall has seen prices rise 6.7 percent for the year, we find 26 percent of the census tracts (groups of around 1,500 homes) experiencing yearly price declines. On the positive end of the scale, 41 percent of the census tracts have experienced quarterly prices increases greater than the MSA's 2.0 percent change.

This variability within each market is a great example of why it's critical to understand prices at the local level. In Washington, D.C. more areas have indeed been affected by the current slowdown, but a majority of the micro markets are still showing strong yearly gains. It's very unlikely the District will continue to post positive gains going forward; however, it continues to demonstrate a resilience to price declines.