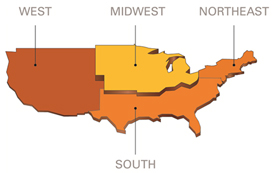 "Price trends nationwide have a seen a considerable upswing driven in large part by the flurry of recent sales attributed to the tax credit and springtime buying activity," said Dr. Alex Villacorta, Senior Statistician, Clear Capital. "This month's national quarterly gains are certainly a positive sign that many markets have responded to the tax credit incentive, but overall markets remain volatile as evidenced by the six month price change keeping mostly flat."


"Metro level markets are showing recent signs of healthy price growth, yet many of these markets are simply returning to their pre-winter levels, and some of the hardest hit areas remain as much as 54 percent below their 2006 peaks," added Dr. Villacorta. "While there is still a lot of ground to be made up, the 8.8 percent yearly gain is a strong lift off of the severe lows of last year, especially when you consider in the same time period unemployment and REO saturation levels hit their highest point in more than two decades." 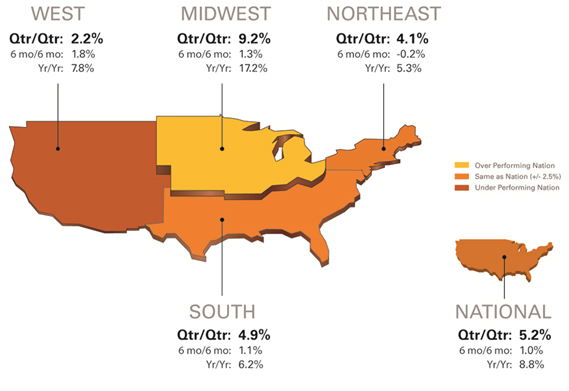 Home prices across the nation made strong moves in a positive direction. Thanks to an increase in springtime sales and the continued residual effects of the federal housing home buyer tax credits, all four regions posted positive gains. Across the U.S., home prices rose 5.2 percent this quarter, bringing the nation back to within one percent of last fall's levels and placing prices firmly 8.8 percent above levels of a year ago. Regionally, the Midwest and South saw the largest quarterly price growth, while the West and Northeast show more stable quarterly gains.

The Midwest continued to lead the nation with quarterly price gains of 9.2 percent, pushing year-over-year gains to 17.2 percent off the deep lows of last year. The other three regions experienced yearly prices more consistent to the national year-over-year average (8.8%). Despite strong quarterly gains, all four regions remained within two percent of the levels achieved last fall, revealing the price volatility that was experienced this past winter.

As a whole, the REO saturation rate was reduced to 24.6 percent, a decline of 3.2 percentage points from what was reported last month. It's likely the effects of the April tax credit have been amplified with the onset of the springtime buying season, and while some have questioned the timing of this credit with concern about the downstream effects on demand, it's evident that the tax credit did succeed, at least in the near-term, in creating an environment more resilient to the ongoing foreclosure influences. 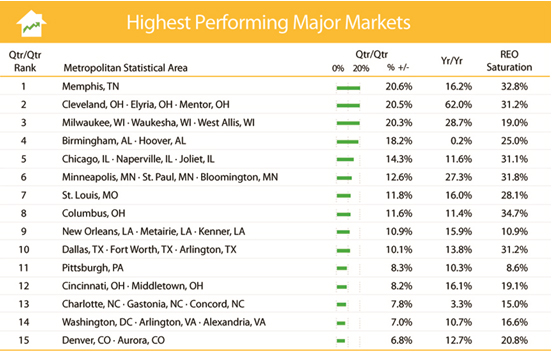 The overall home price gains across the U.S. were aided largely by the quarterly jump in prices by the top 15 highest performing major markets. Last month's single digit price gains signaled the onset of these conditions, and have been replaced with double digit quarterly gains among the top ten markets. After the winter drop in home prices, the timing of the tax credit has added another leg to the price volatility experienced in recent years. However, with quarterly prices for the group up 12.6 percent and yearly price gains up 17.1 percent on average, the volatility is in the positive direction which has helped absorb some of the burden on the market maintained through the presence of distressed sales.

The larger markets of the West have remained more stable, falling off the highest performing market list as they exhibit smaller increases than the more volatile markets of the South and Midwest. This is apparent in Memphis, Tenn. and Cleveland, Ohio, which jumped into the number one and two ranked positions, respectively.

While the seasonal timing and incentivized price swings have played into the substantial quarterly price increases of these markets, it's important to measure the broader recovery of these markets by looking at longer time periods, as well as isolate the influence of the REO segment. In Cleveland, current home prices are still 54.6 percent below its market peak in 2005. While this is a very steep decline, it's actually recovered 21.3 percentage points compared to the peak of its decline (-75.9% price change) in early 2009. Further, if you remove REO sales from equation, the quarterly price growth of the non-REO segment in Cleveland still stands at 8.5 percent, a substantial gain but far below the 20.5 percent combined number used in this month's rankings.

Similarly, Memphis' quarterly price gain of 20.6 percent leaves prices 1.9 percent below their levels of the fall of 2009. Prices in Memphis have dropped 51.1 percent from the market peak in late 2005 to trough in 2009, and have recovered 11.8 percentage points, now only down 39.3 percent from the peak of the market. With a quarterly price increase of 5.8 percent for the non-REO market, it further highlights the gains found among the distressed segment. 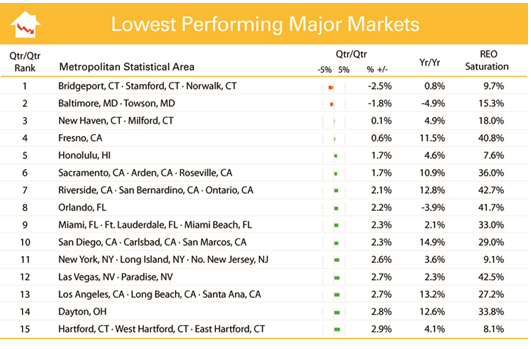 Only two markets, Baltimore, Md. and Orlando, Fla. saw prices remain below their levels of a year ago. However, both markets did manage to edge closer to positive year-over-year territory when compared to last month's reported numbers. Honolulu and the California markets of San Diego, Riverside, and Fresno saw stable quarterly price gains, with each market's quarterly growth rate varying by less than one percentage point compared to last month's report.

Home prices in the Los Angeles Metropolitan Statistical Area (MSA) rebounded 13.2 percent from its market bottom one year ago. While this surpassed the 8.8 percent gains seen at the national level for the same period, conditions varied widely across this large and diverse market. At more local levels, some markets saw prices outperform the metro-level numbers, while other markets have underperformed both the metro and national gains. These micro market trends are informative, revealing differences in the buyer base of each market.

With recent demand focused on lower-priced and distressed properties, an area in western Santa Ana (ZIP code 92703) outpaced the rest of the Los Angeles MSA by returning a 29.5 percent gain for the past year. With an REO saturation rate that peaked above 70 percent in 2008, and a property mix of lower-priced single family, condominiums and manufactured housing, this micro market has proved volatile both on the decline (losing 52.2% since peak) and recent recovery. As REO saturation rates declined into the 30 percent range over the last year, the rapid consumption of discounted foreclosures is evident, and indicates the influx of first-time home buyers and investors.

One segment of West Hollywood (ZIP code 90069), an area of high-priced single family homes and condominium units, has seen a -13.7 percent price change over the past year--the worst in the Los Angeles MSA. With few high-end buyers and little incentive to purchase higher priced homes, this normally attractive area has struggled to find a pricing bottom. Price changes of -32.9 percent since market peak (the current year-over-year dip leaves it at its lowest point since 2006), indicates this market is suffering from the slow economic recovery; a contrast to the steep declines and sudden upward bounce of some markets as they feel the impact of incentives and speculative buying.