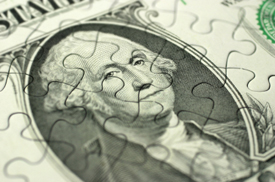 Is Massive Refinancing During Bubble Years a Ticking Bomb?

During the four key years of the housing bubble - 2003-2006 - an incredible number of mortgages were refinanced.  In an earlier REAL ESTATE CHANNEL article, "Investors Played a Key Role in Creating Housing Bubble," I pointed out that homeowners "cashed out" a total of $820 billion while refinancing their mortgages in 2005-2007 according to Freddie Mac figures.

This refinancing frenzy needs to be examined in more depth including the danger it might pose for the housing market down the road.

In April of this year, the Financial Crisis Inquiry Commission appointed by President Obama published its Preliminary Staff Report entitled "THE MORTGAGE CRISIS."  In the report, the following chart on annual mortgage originations appears. 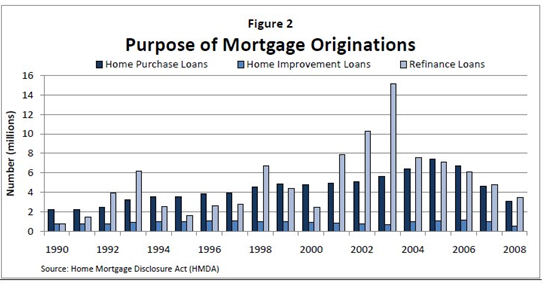 These figures are derived from data which lending institutions are required to report to the federal government under the Home Mortgage Disclosure Act (HMDA).

Notice how total refinancing soared in 2002 as the Federal Reserve drastically lowered interest rates to minimize the economic fallout from 9/11.  That year, a record 10.2 million mortgages were refinanced according to HUD.  Keep in mind that there are only about 55 million total mortgages outstanding.  As they had done in the past, homeowners took advantage of the drop in interest rates to lock in a lower rate mortgage.

Refinancing in 2003 was simply off the charts.  According to the authors of the Preliminary Staff Report cited above, more than 15 million mortgages were refinanced that year for a total of slightly more than $2.5 trillion.  Remember, at the end of the year, there was a total of only $7.9 billion mortgage debt outstanding (including home equity loans).  Thus nearly 1/3 of the entire outstanding mortgage debt in this country was originated as refinancings in 2003.

The next year, 2004, was when home prices really soared, by 30-40% in the hottest bubble markets.  Although refinancings dropped to a mere 7.6 million originations, cash-outs began to take off.  According to Freddie Mac, roughly 40% of all homeowners who refinanced that year pulled money out of their refinanced mortgages to spend as they pleased.

Interest rates had begun climbing in 2005, yet that did not prevent homeowners from using their increasingly valuable houses as a piggy bank to be tapped at will.  Some 72% of all homeowners who refinanced pulled cash out of their piggy banks to the tune of $262 billion.

During 2004-2005, it was California which led the way in refinancings.  Keep in mind that many of the largest unregulated mortgage lenders were headquartered in California.  They were only too willing to shovel out refinance loans to practically any homeowner in California who could sign a document.

For those two years, the California numbers are simply mind-boggling.  According to mortgagedataweb.com, which derives its figures from municipal recordings, slightly more than 2.6 million California mortgages were refinanced in 2004 and another 2.4 million the next year.

The average size of these refinanced mortgages was a surprisingly small $200,000.  That's because most of them were second lien Home Equity Line of Credit loans (HELOCs) many of which were taken out by long-time homeowners who refinanced several times as home prices climbed seemingly toward the sky.

The following short sale situation, described in a September 2009 post in the socalbubble.com blog, was not at all uncommon in California: "The homeowner had purchased some 20+ years earlier, but had withdrawn over $500K [refis] in the last decade."  He goes on to explain that "The most amazing thing to me during the housing downturn is the number and amount of refis that I have seen.  It seems MOST of Southern California took out several hundred thousand dollars each from their houses; enough to buy entire houses outright in most other places in the country."

To get a sense of what really went on in southern California, here is a description of one homeowner's refinancing which was recently posted on the Irvine Housing Blog:

To give you an idea of the magnitude of this jumbo refinancing number, there were only slightly more than 1.4 million jumbo mortgage loans originated throughout the entire nation for the purchase of homes in 2004-2006.

In the major metros such as Los Angeles, San Francisco and San Diego, four times as many refinancing loans as purchase mortgages were originated in 2004-2005.  For the Los Angeles metro area alone, roughly 1.2 million mortgages were refinanced in these two years.  The average L.A. jumbo mortgage during this period was approximately $530,000.

Because of the very low down payment that lenders required from borrowers during these two years, the collapse in California home prices has resulted in nearly all of the outstanding jumbo refinance mortgages originated in 2004-2005 being seriously underwater now.

Since these jumbo loan amounts exceeded the Fannie Mae and Freddie Mac limits for either purchase or guarantee, banks which originated them were forced to keep in their portfolio those loans which Wall Street could not securitize and sell to private institutional investors.  As jumbo mortgage defaults skyrocketed in the last two years, banks have raised down payment requirements for new loans and sharply curtailed the total number of jumbo originations.  According to Lender Processing Services, 66,000 jumbo loans were originated nationwide in March 2007.  Three years later, in March of this year, a mere 13,000 were closed.

The drying up of jumbo mortgage money has made it extremely difficult to sell almost any California home which is encumbered with a jumbo mortgage.  That has put tremendous downward pressure on prices for these homes.

If you add in the roughly 1.8 million underwater homeowners who purchased a property in 2004-2006, you can begin to see the enormity of the California mortgage disaster.

The Madness of HELOC Borrowing

As bad as the situation is for underwater homeowners with jumbo mortgages, the problem with refinanced mortgages goes well beyond this.  Throughout the country, homeowners used second lien home equity lines of credit (HELOCs) as another way to tap their piggy bank house during the bubble years.  The use of these HELOCs was by no means limited to California.

From the beginning of 2001 to the middle of 2004, the annual growth rate of HELOCs at all FDIC-insured institutions was more than 30%.  In its Winter 2004 Outlook report, the FDIC listed the numerous ways in which banks were encouraging borrowers to open new HELOCs including providing automatic credit limit increases as the property increased in value.  To increase the use of existing HELOCs, banks were actually charging "nonuse fees" on lines that were open but inactive.

Although delinquency rates on HELOCs were a paltry 0.5% in mid-2004, the FDIC nevertheless warned that if home prices were to stagnate or fall, this could erode the equity of borrowers which might "reduce their incentive to repay the loan."  No one paid any attention.  Banks continued to hand out HELOCS to almost any homeowner throughout 2005 and into 2006.  Many of these were refinances of older HELOCs with greatly increased credit limits.

Perhaps nothing can illustrate the refinancing madness that gripped the country during the bubble years better than the following example.  Last year, a 63 year old widow wrote a letter to one of the major banks complaining about her treatment as she attempted to obtain a mortgage modification. The letter was posted on the website MoneyCafe.com.  She lamented that she had owned the house for thirty-seven years, but financial problems stemming from the recession had caused her to miss several mortgage payments.

You are probably wondering, as I did: How much could she possibly owe on a house she had owned since 1972?  The woman went on to mention that her first mortgage was $1,247,000 and her HELOC balance was another $198,000.  Yes, that's right - a total of $1,445,000.  You would think that most homeowners who have lived in their house for 37 years would own it outright.  Not in California, though, where she resided.

What the Refinancing Frenzy Means for the Housing Market

When the housing crisis erupted in early 2007, banks began to curtail their originations of HELOCs.  In spite of this, a study published by Equifax Capital Markets in October 2009 found that 45% of prime borrowers with securitized first mortgage loans that were still current in July 2009 also had a HELOC.  Worse yet, the average outstanding balance on these HELOCs increased steadily from roughly $83,000 in mid-2005 to $118,000 four years later.

It is very likely that a considerable number of financially-strapped HELOC borrowers are using their line of credit to cover the first mortgage payment and avoid default.  Unfortunately, banks have begun to reduce or eliminate the available line of credit in states where home prices have declined substantially.

Last September, Equifax estimated that there were roughly 13.6 million HELOCs outstanding.  Nearly all of them were second or "junior" liens that stood in line behind the first lien holder in the event of a foreclosure.  When added together, they pose a tremendous financial burden for the vast majority of these 13.6 million homeowners.

Several key analyses of so-called "underwater" homeowners do not include these outstanding HELOCs in determining whether a property is underwater or not.  Some do not include the refinancing of first mortgages which we have looked at.  To omit either or both of them will cause a real underestimation of the number of homeowners with negative equity and in serious danger of defaulting.

It is not an exaggeration to say that the massive refinancing undertaken during the bubble years of 2003-2006 is a burden that will probably push back the housing recovery well into the future.