(NEW YORK, NY) -- Data through November 2009, released today by Standard & Poor's for its S&P/Case-Shiller1 Home Price Indices, the leading measure of U.S. home prices, show that the annual rates of decline of the 10-City and 20-City Composites continue to improve, in spite of price declines being measured across many markets during November. This marks approximately 10 months of improved readings in the annual statistics, beginning in early 2009, and is the third consecutive month these statistics have registered single digit declines, after 20 consecutive months of double digit declines. 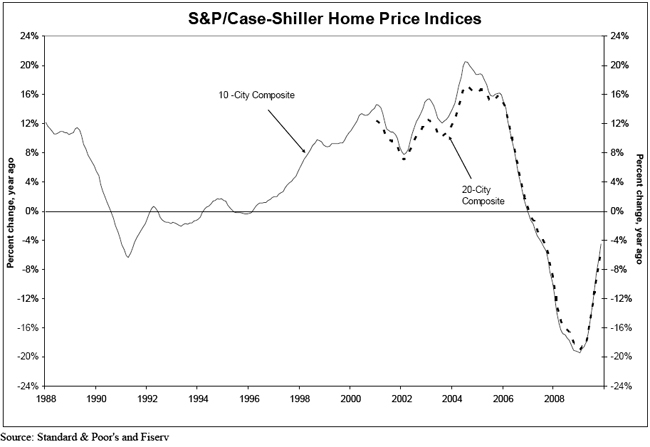 The chart above depicts the annual returns of the 10-City and 20-City Composite Home Price Indices, declining 4.5% and 5.3%, respectively, in November compared to the same month last year. All 20 metro areas and both Composites showed an improvement in the annual rates of decline with November's readings compared to October.

"While we continue to see broad improvement in home prices as measured by the annual rate, the latest data show a far more mixed picture when you look at other details," says David M. Blitzer, Chairman of the Index Committee at Standard & Poor's. "Only five of the markets saw price increases in November versus October. What is more interesting is that four of the markets - Charlotte, Las Vegas, Seattle and Tampa - posted new low index levels as measured by the past four years. In other words, any gains they might have seen in recent months have been erased and November is now considered their current trough value. On the flip side, there are still some markets that continue to improve month-over-month. Los Angeles, Phoenix, San Diego and San Francisco have seen prices increase for at least six consecutive months. Looking at the annual figures, four markets - Dallas, Denver, San Diego and San Francisco - have finally entered positive territory, something we really haven't seen in at least two years in most markets.

"To add more mixed signals, we are in a seasonally weak period for home prices, so the seasonally-adjusted data are generally more positive, with 14 of the markets and both composites showing improved prices in November. On balance, while these data do show that home prices are far more stable than they were a year ago, there is no clear sign of a sustained, broad-based recovery." 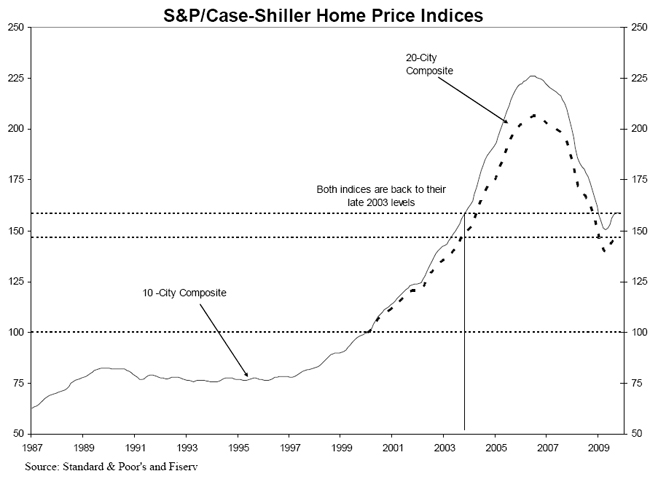 San Francisco has reported eight consecutive months of positive returns, San Diego has reported seven and Los Angeles and Phoenix are close behind with six. The two Composites were both down 0.2% over the month, and only five of the MSAs reported positive monthly returns for November. Looking at the annual statistics, Chicago is no longer reporting double-digit declines. Dallas, Denver, San Diego and San Francisco are in positive territory with their annual figures at +1.4%, +0.5%, +0.4% and +1.0%, respectively.

Charlotte, Las Vegas, Seattle and Tampa all reached new low levels in November. For Las Vegas, in particular, prices have declined for 39 consecutive months, with a peak-to-trough reading of -55.6%. It is

The table below summarizes the results for October 2009. 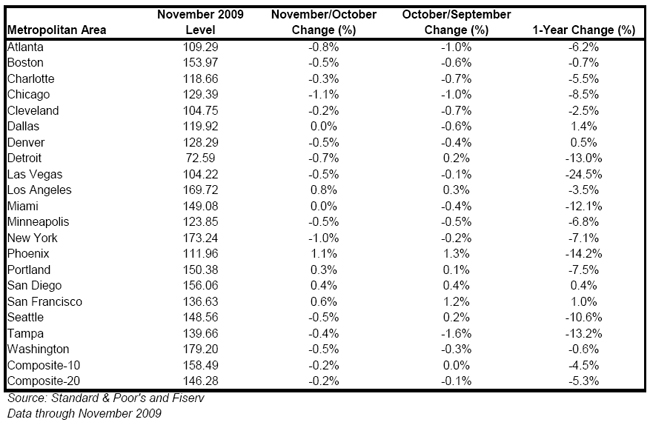