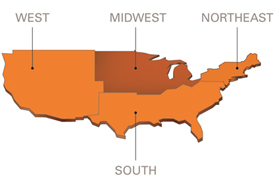 "We continue to see sustained price growth throughout much of the country with yearly price gains reflecting the housing recovery off of last year's lows," said Dr. Alex Villacorta, Senior Statistician, Clear Capital. "The expiration of the tax credit at the end of April has certainly contributed to the growth of prices we are observing and as more sales close before the June 30 deadline we expect that markets across the country will continue to see strengthening of prices."

"It is interesting to note, however, that this current momentum is a far cry from where we were a year ago," added Villacorta. "In June of last year, we reported a national yearly decline of 19.3 percent, whereas the present report shows a 6.8 percent gain. Similarly, the present REO saturation rate of 27.8 percent is a significant improvement from last year's 41.7 percent. This dramatic shift in price trends reflects the unprecedented volatility over the last couple of years and the delicate state of local real estate markets around the country." 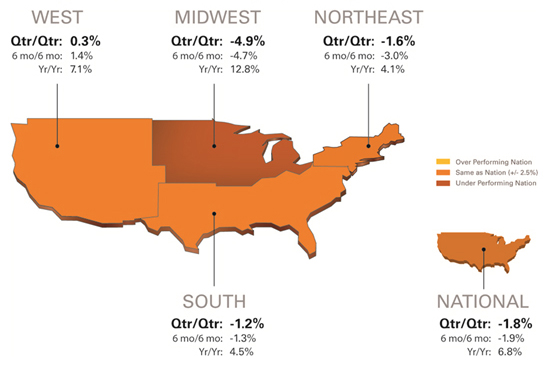 After a winter of slowed housing gains, national yearly prices edged upward to 6.8 percent--its highest mark since July 2006. This increase was largely aided by the end of the tax credit in April and start of the spring buying season. May's gains followed the back-to-back 5.1 percent yearly gains achieved in March and April. Similarly, the quarterly loss for the Nation (-1.8%) is a substantial improvement over the -5.0 percent price change reported last month, and marks the first month-over-month improvement since February's report. In addition, the national REO saturation rate dropped 1.8 percentage points to 27.8 percent, an improvement from the 41.7 percent rate this time last year.

These numbers are a good sign that the market has begun to turn around off last year's lows. When the first Clear Capital HDI Market Report was released one year ago this month, the national year-over-year price change was an eye-opening -19.3 percent.

Additionally, this month's improvement is reflected across all four U.S. regions, with the Midwest experiencing the largest jump (4.5 percentage points) bringing its current quarterly price change to -4.9 percent. While quarterly prices remain negative in three of the four regions, yearly gains remained intact. As tax-credit incentivized sales continue to close through June, it's likely prices will maintain their positive momentum heading into the summer months. 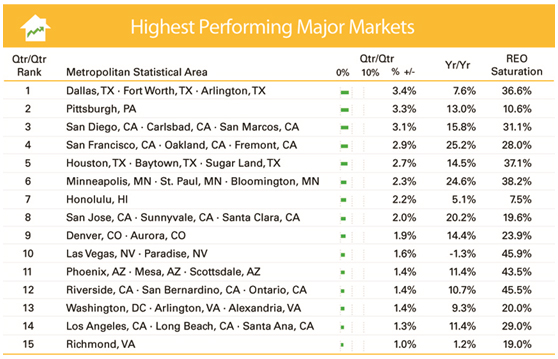 The regional improvements extended to the highest performing major markets, pushing all quarterly price gains on the list into positive territory. Dallas, Texas, leads this month's list with a price increase of 3.4 percent from late 2009. The REO saturation rate also fell 4.5 percentage points in Dallas, to 36.6 percent. 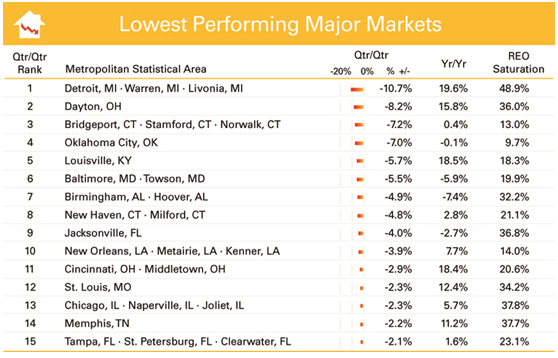 All of these markets improved their quarterly losses from last month's report, this month averaging a -4.9 percent price change compared to -11.1 percent last month. Additionally, thirteen improved their yearly numbers, and twelve improved their REO saturation rates. And the exceptions were modestly off, with yearly prices falling 2.7 percentage points in Oklahoma City, Okla., and only 0.2 percentage points in Tampa Fla. REO saturation rose only 0.6 percent in both Bridgeport, Conn. and Baltimore, Md.; while New Haven, Conn. held steady.

While prices as a whole for the Portland/Vancouver/Beaverton MSA have slid 22.5 percent since this market peaked in mid-2007, the area has been spared some of the larger price declines and higher REO saturation rates (Portland's rate is currently 17.6%) frequently found elsewhere on the west coast. Home price declines in the Portland area have slowed considerably with current prices just 1.5 percent below their levels a year ago. The area's reputation for having a high quality of life, advanced urban planning and industrial diversity has helped mute the effects of the housing downturn.

At the most northwestern end of North Portland is ZIP code 97203 - the best performing micro market in this MSA. This market area is a convenient and diverse location that embodies mostly older, well-kept homes at reasonable prices. Close to downtown, with easy access to the University of Portland, and in-between the industrial rail and shipping hubs, this area has attracted new home buyers and investors - the prevalent types of homebuyers in recent months. Prices have risen 8.5 percent for the year and, while home buying is still soft by pre-peak standards, it has managed to turn in a 0.3 percent price gain in the recent quarter.

West Linn, Ore. (ZIP 97068), the worst performing ZIP code in this MSA, is also conveniently located in a community south of downtown Portland and north of Salem, Ore. However, West Linn includes a mix of mostly single family residence that average double the size and price of the North Portland homes. With purchase prices ranging into the millions and a small renter base, this more suburban area on the outskirts of Portland's urban growth boundary is less appealing to the recent buyer pool that's looking for affordable first time purchases or rental property. Subsequently, prices haven't found a bottom in this market, and have dropped 21.7 percent over the last year. 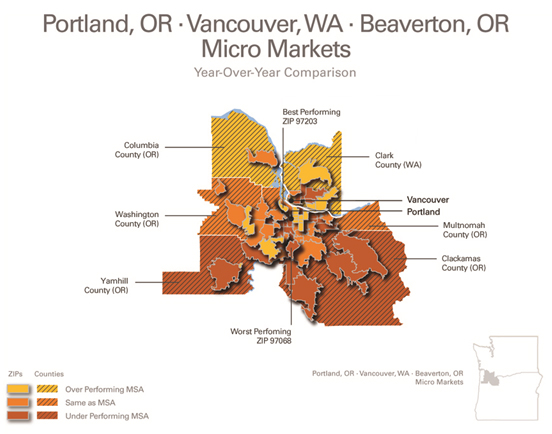