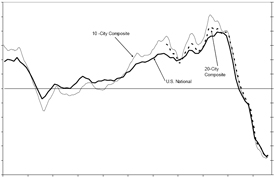 (New York, NY) -- Data through March 2009, released today by Standard & Poor's for its S&P/Case-Shiller Home Price Indices, the leading measure of U.S. home prices, show that the U.S. National Home Price Index continues to set record declines, a trend that began in late 2007 and prevailed throughout 2008. 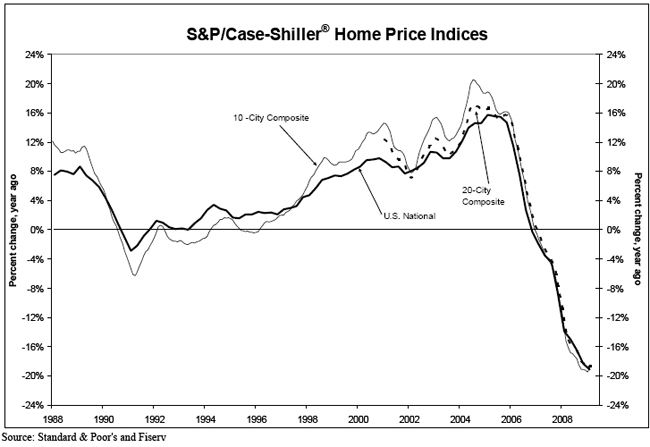 "Declines in residential real estate continued at a steady pace into March," says David M. Blitzer, Chairman of the Index Committee at Standard & Poor's. "All 20 metro areas are still showing negative annual rates of change in average home prices with nine of the metro areas having record annual declines. Seventeen metro areas recorded a monthly decline in March, with Minneapolis, Detroit and New York posting record monthly declines. On a positive note, nine of MSAs are reporting a relative improvement in year-over-year returns and nine of the  20 metro areas saw an improvement in their monthly returns compared to February. Furthermore, this is the second month since October 2007 where the 10- and 20-City Composites did not post a record annual decline. Based on the March data, however, we see no evidence that that a recovery in home prices has begun." 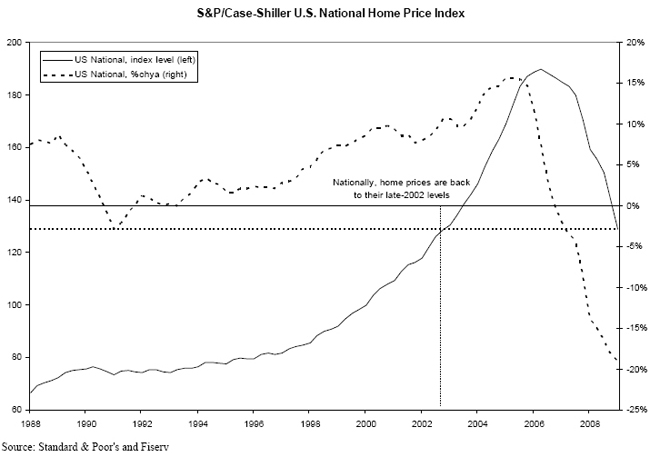 The chart above shows the index levels for the U.S. National Home Price Index, as well as its annual returns. As of March 2009, average home prices across the United States are at similar levels to what they were in the fourth quarter of 2002.   From the peak in the second quarter of 2006, average home prices are down 32.2%.
Minneapolis had a record monthly decline of 6.1% in March. This represents the largest monthly decline of any metro area in the history of the indices. For March, Detroit and New York also reported their largest monthly declines, returning -4.9% and -2.5%, respectively. The performances of these two MSAs represent the extremes of the national boom/bust scenario. The New York index is still up 73.4% from January 2000, though down 19.7% from its June 2006 peak. The Detroit index is 29.0% lower than in January 2000. Detroit home prices are back to their mid-1995 levels.
In terms of annual declines, the three worst performing MSAs continue to be the same three from the Sunbelt, each reporting negative returns in excess of 30%. Phoenix was down 36.0%, Las Vegas declined 31.2% and San Francisco fell 30.1%. Denver, Dallas and Boston continue to fare the best in terms of annual declines down 5.5%, 5.6% and 8.0%, respectively.
Looking at the data from peak-thru-March 2009, Dallas has suffered the least, down 11.1% from its peak in June 2007; while Phoenix is down 53.0% from its peak in June of 2006. All of the 20 metro areas are
in double digit declines from their peaks, with ten of the MSAs posting declines of greater than 30% and two of those - Phoenix and Las Vegas - in excess of 50%.
The table below summarizes the results for March 2009. The S&P/Case-Shiller Home Price Indices are revised for the 24 prior months, based on the receipt of additional source data. 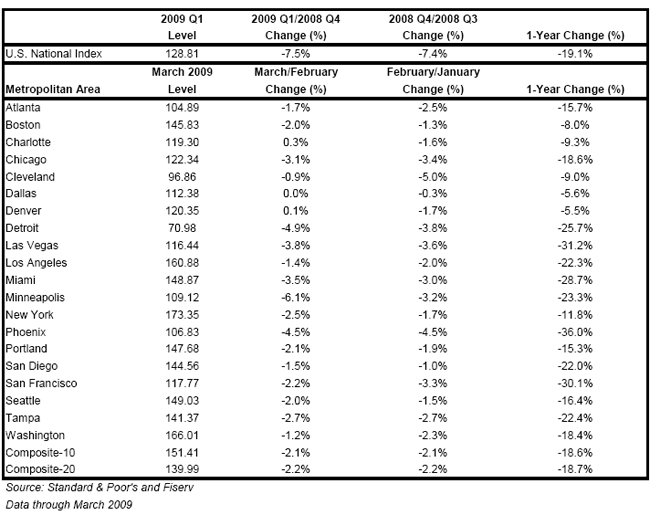