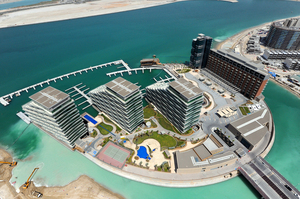 (ABU DHABI, UAE) -- This week I joined a press tour of the Al Bandar community that sits on the coast north of Abu Dhabi island looking across a small harbor to Yas Island, home of the Formula 1 Grand Prix track and Ferrari World. Al Bandar is the northernmost portion of the Al Raha Beach development that includes HQ, the iconic disc shaped office building.  Yas Island and Al Raha Beach are among Aldar's signature projects.

Al Bandar so far means Al Naseem A, B, C - three towers built in a staircase stepped fashion, Al Manara - a rectangular tower that is mostly glass, and Al Barza - a low building with a brick exterior. These residential buildings are complete except for finishing touches as is the cement plaza where they sit. However, all around, construction is ongoing. 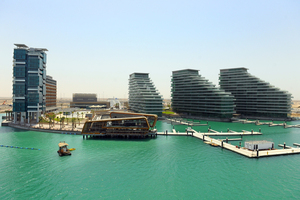 The press visitors gathered in an apartment on the seventh floor of Al Naseem B where a huge terrace looking over the water to Yas Island greeted us. The view will be wonderful at some point in the future. Today, a lot of  unpaved terrain comes in front of the sea and Yas Island.

We were told the water will come to the foot of the concrete plaza below which means that digging, dredging, and trucks will be part of the view for whoever decides to live in that lovely apartment, for six months at least, maybe longer. The colorful brochure in English and Arabic that promotes the entire Al Raha Beach project, branded as "the ultimate waterfront city," calls Al Bandar an island which means there will be more dredging from the highway exit to the community as well as in the direction of Yas Island.

Then we were taken to the most up market section, the Al Manara tower which features a single apartment per floor. The apartment we entered on the second floor was enormous with wraparound balconies accessible from most rooms. A huge living room with two glass walls was next to the largest open plan kitchen/dining/family room I have ever seen, nearly the size of the living room itself. 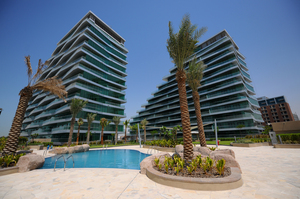 According to Aldar Sales Director Rami Nasser, some of these apartments were sold for $1.6 - $1.9 million. He said that prices for the remaining apartments are not appreciably lower although most of the building was sold two years ago, before the financial crisis and even before construction started, as used to be the case in Abu Dhabi and especially Dubai.

Now, as I have written in previous columns, Abu Dhabi and Dubai have switched places. In real estate, in the arts, in education, more seems to be happening in Abu Dhabi than in Dubai. Dubai used to be full of plans for future extravagant buildings and looked as if it had few areas untouched by ongoing construction - everywhere roads were diverted; trucks carrying enormous loads of sand or pipes blocked traffic; sand and dust were in the air in every part of the city.

It's quieter now in Dubai though building hasn't stopped entirely, but the atmosphere is less hurried, there are fewer traffic jams, and the air looks cleaner, at least as much as one can tell without measuring. A government publication revealed this week that 500 projects have been cancelled in Dubai which has made a big environmental and psychological difference. 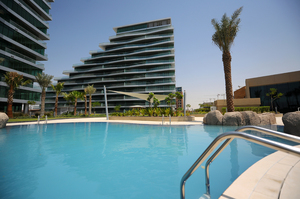 That's makes sense because what used to be called Cityscape Dubai has been renamed Cityscape Global, and the organizers have made a point of featuring projects from outside the UAE in their publicity. Dubai is reviving its old 19th century role as a center of trade and economic activity in the Gulf and focusing on retail and tourism while real estate which drove the engine from 2001-2007 is no longer center stage.

Against this background of a Dubai economy  that is beginning to stir again, the emirate's ruler and UAE prime minister Sheikh Mohammed bin Rashid Al Maktoum said this week in an interview, "We are back."  In Abu Dhabi Aldar continues to unveil projects that are at least semi complete like Al Bandar and the new Central Market in the heart of the city where some stores have already moved in before the towers above are ready for occupancy.

The press tour signified that Aldar is making a push for owners or renters to move into the Al Bandar apartment houses. So far, 22 families are resident. By the middle of next month, 150 will have moved in. Nasser said that 90 percent of the apartments in Al Bandar have been sold which means owners are betting that prices will go up as Al Bandar becomes more of a place to live and less of a base for construction.

At least most of the people who are moving into Al Bandar are guaranteed a water view and a reasonable distance from other buildings. In the up market Khalidiyah area near the Corniche where I live, at least eight 20 or more story towers are close to completion. Most of them have only a few feet of clearance from a neighboring tower. Residents will have to keep opaque curtains permanently drawn to avoid knowing too much about their neighbors.

That's the situation in Abu Dhabi new apartment housing today which is why Aldar can claim Al Bandar as a luxury project. It has some fine features, no doubt, like the three outdoor swimming pools but in the Al Naseem towers, hallways are narrow and elevators small, not what one associates with luxury apartment houses.

Abu Dhabi housing supply for expatriates has been so limited the last few years that rents for any kind of apartment were way too high and new buildings began to be built without too much consideration for tenant requirements like onsite garages. Many people new to the capital will be moving into bright new apartments that offer no view and no parking. For the next few years, those apartments will be more expensive than better ones with more amenities in Dubai, but Abu Dhabi's continued economic expansion will keep them filled while oversupply in Dubai should keep those rents low.