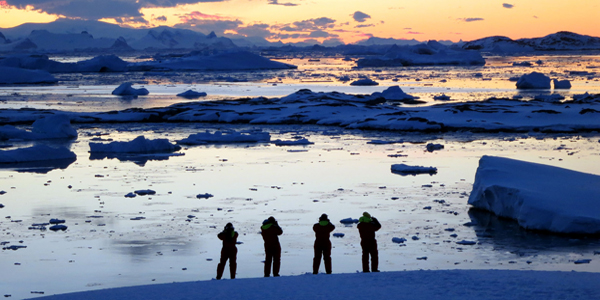 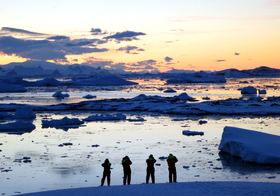 Been everywhere? Done everything? Well...ever been to Antarctica? Ever camped in Antarctica?

Well, now's your chance. Now's your chance to sleep under the stars in Antarctica, taking in the summer night (and 24-hour sun) from a surprisingly-comfortable tent. A Norwegian company called Hurtigruten began taking customers on out-of-the-ordinary sea-cruise voyages in 1892, first in Norway, and now, with offices in a number of countries, to a variety of destinations. Hurtigruten isn't new to Antarctica; it's been sailing there for years. But now, its customers have the option to spend a night sleeping off the ship...which will probably be the most memorable night of their lives.

You'll join the crew in pitching two-person tents on the frozen landscape of the White Continent...perhaps being watched by "locals" such as penguins or seals. You'll lie down for the night in cozy, comfortable bedding materials. You'll go to sleep and wake up to the sun. You'll be enveloped in the sounds of silence, and by a sun-streaked sky so brilliant at some times and so subtle at others that you'll probably keep waking up to see it. And, in so doing, you'll get a glimpse of how it might have been for explorers such as Roald Amundsen and Earnest Shackleton (although, because of modern equipment and safeguards, you'll be a lot safer than they ever were!).

You'll be accompanied every step of the way by two experienced expedition guides for every 15 participants. And you'll be supplied with all cold-weather needs (except pajamas!).  Depending on the weather, guides will take you out on short walks; give you fascinating discussions about what you're seeing, hearing, touching and experiencing; show you how to listen for "polar sounds"; keep you supplied with hot drinks (and a cold-drink toast); and wake you up for the White Continent sunrise. 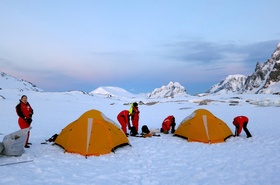 The Antarctica trips - aboard the MS Fram - were developed in collaboration with the Norwegian Polar Institute. All meals are still onboard ship. Although the camping option is offered on every departure, the final decision regarding the nighttime-camping stop is based on the available locations as well as prevailing weather conditions. And there's plenty of variety, too; Hurtigruten offers five different Antarctica itineraries.

There's a 13-day "Classic Expedition" and a ten-day "Polar Circle Expedition," each focusing solely on Antarctica. You'll sail through the dramatic Drake Passage, tracing the paths of those earlier explorers, and you'll land on breathtaking spots filled with exotic wildlife.

On the 13-day "Weddell Sea Expedition," you'll follow the route of British Captain James Weddell, who managed to reach the 74º latitude in 1823 - the first one to do it. The 17-day "Christmas Expedition" celebrates the season with traditional carols, festive meals, Santa Claus visits and a New Year's gala...and has two extra bonuses - the Falkland Islands and South Georgia. The longest expedition is the one called "In the Realm of the Great Explorers." On this 19-day trip, you'll trace the path followed by Sir Ernest Henry Shackleton in Antarctica in 1908-1909, and also visit the sub-Arctic eco-systems of the Falklands and South Georgia. 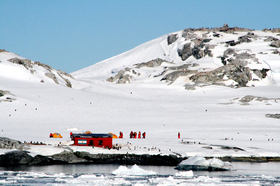 It's just you and The White Continent... (Courtesy Else Kristine Tjessem)

Antarctica is the only continent with no permanent human inhabitants. However, it doesn't lack for non-human inhabitants. Its home to millions of penguins, thousands of seals, and large pods of whales who come here to feed in summer. It's the coldest, driest, highest, and cleanest continent. And you'll see sights such as giant icebergs (when they "calve," or break up, the earth shakes and the air is filled with a thunderous roar), groups of penguins swimming out to sea to hunt for krill, and leopard seals patrolling the shorelines.

The nice thing about these images is that, even though you may only see them once in your life...you'll remember them for the rest of your life.