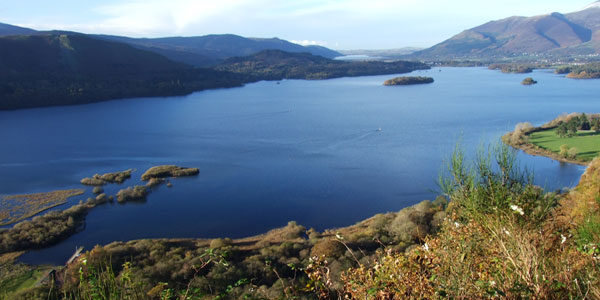 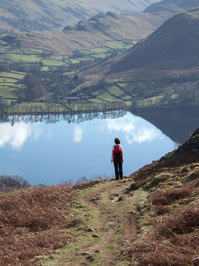 A picture's worth a thousand words... (Courtesy English Lakeland Ramblers)

The Lake District is the Eternal England.

It's the England of tiny villages that haven't changed in a thousand years. Of green mountains and clear-blue waters and emerald meadows dotted with sheep. Of 2,000-year-old Roman ramparts. And of quiet country paths where you're more likely to see fox, fowl, or cow than  human beings, save for the warm smiles in the bucolic cottages and villages along the way.

Here, in the northern part of England, near the border of Scotland, even the accent changes, with a bit 'o the Scottish lilt.

The "human" highlight of the Lake District is Hadrian's Wall, a 73-mile-long series of ramparts and forts constructed by the Roman Emperor Hadrian, to keep the marauding Scots at bay.  Today it's a World Heritage Site. Walk it, and you'll come to milecastles (small fortresses about a "Roman" mile apart) and Neolithic stone circles.

Lake District National Park's 880 square-miles include England's highest mountain (Scafell Pike, 3,068'), its deepest lake (Wastwater), and wonderfully-evocative villages such as Bowness-on-Windermere. And a company called English Lakeland Ramblers (located in Montclair, Virginia), which has been doing walking tours of England, Scotland, and Wales since 1985, can take you there.

Here, you can walk in the footsteps of the early conservationists such as the appropriately-named poet William Wordsworth, John Ruskin (a noted artist and critic in the 1800's), and Beatrix Potter (author of children's books such as The Tale of Peter Rabbit). You'll stay in classic country inns, and explore a new part of the Lake District each day. You'll visit Dove Cottage, home of William Wordsworth. You'll take the Windermere ferry to Hilltop Farm, home of Beatrix Potter. You'll visit Brantwood, home of John Ruskin, and the Neolithic Castlerigg Stone Circle. And you'll take a launch ride on the beautiful lake called Derwentwater. 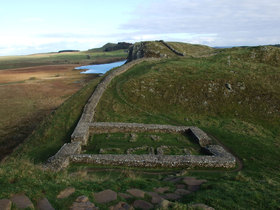 You start off in the picturesque village of Grasmere, in which you'll visit Grasmere Church, with its intricate wooden beams, the Grasmere Gingerbread shop, and the graveyard where William Wordsworth is buried.

On the second day, you'll walk from your inn to the resort town of Ambleside, via the summit of Loughrigg, a stunning viewpoint. In the afternoon you'll visit Wordsworth's home, Dove Cottage, and the Wordsworth Museum.

The next day, you'll take the ferry across Windermere, and head for Hilltop Farm, purchased by Beatrix Potter in 1905. Following that is a drive to Brantwood, home of poet/artist/social reformer/conservationist John Ruskin, and lunch at the Jumping Jenny restaurant, named after Ruskin's boat.

On the fourth day, you'll travel to the Borrowdale Valley, along a mountainous road through passes with names like Wrynose and Hard Knott, with a stop at an ancient Roman fort. You'll visit the colorful village of Boot, and Eskdale Corn Mill. Later you'll pass the ancient cross planted by Vikings at Gosforth. 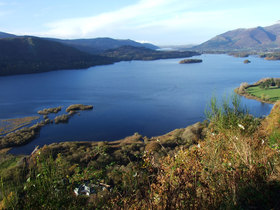 In the Borrowdale Valley, you can see forever. (Courtesy English Lakeland Ramblers)

The next day brings you to the Castlerigg Stone Circle, to be followed by an afternoon walk on the Derwentwater lakeshore path, or a harder alternative - crossing the summit of Cat Bells (worth the extra effort, because of the views!). The day ends with a launch ride on Derwentwater.

On the last full day, you'll visit the mine shop at the top of Honister Pass, with a possible detour to the Iron Age-fortress atop Castle Crag.

Afterwards, when you're back in the hustle and bustle of the real world, the Lake District may seem a million miles away. But you'll always be able to summon up the gentle memories of its green hills, its ancient walls, its lost-in-time villages, and its welcoming people.