Gliding Down The Amazon 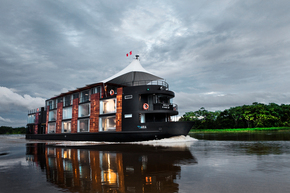 Luxury in the midst of jungle.(Courtesy Aqua Expeditions)

If there's a deeper, more-mysterious wilderness in the world than the Amazon River Basin, no one's found it yet.

This river is 4,000 miles long (second-longest in the world), and runs through four countries - Peru, Brazil, Colombia, and Ecuador. It's often explored by true wilderness-types, on roughing-it outdoor adventures in which days are spent on canoes and nights are spent in sleeping bags. But now, thanks to a Lima, Peru company called Aqua Expeditions, you can see the same things these explorers do...but in a luxurious style more akin to a yacht than a canoe.

Aqua Expeditions is the first adventure-travel company to introduce five-star luxury cruises on the Amazon in Peru, with two boats plying these waters, the Aqua and - just inaugurated last year - the Aria. You'll start your voyage in the inland port of Iquitos, so remote that it can only be reached by air (90 minutes) from Lima) or water. Once a booming rubber town, Iquitos is still filled with the charming buildings of that earlier era - including one designed by Gustav Eiffel.

The boars offer a variety of different tours. And these aren't your ordinary tours.

For example, you may have the chance to go piranha fishing in the (appropriately-named) Iguana Isles. There are dolphin, bird, and monkey expeditions. There's the black water of the Yanallpa Flooded Forest. The chance to have breakfast with pink dolphins. Pleasant encounters with   natives of the Amazon Basin, to whom this isn't a foreboding jungle...but, simply, home. A walk through the rainforest. Expeditions to find alligator-like creatures called caimans. And the magnificent Pacaya Samiria National Reserve, known as the "Jungle of the Mirrors." 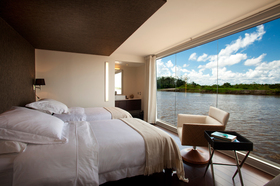 Room with a view...(Courtesy Aqua Expeditions)

The Aria can accommodate 32 guests, in rooms with the look of an Amazon lodge, and large windows affording panoramic Amazon River views. Dining on-board is gourmet, on fine crystal and china, in a room as luxurious as any on-land restaurant. The menu emphasizes Peruvian cuisine, with a touch of Continental. And there's a lounge for before- or after-dinner socializing.

The Observation Deck offers a vantage point from which to take in the multi-colored vegetation and exotic animal life everywhere you look. And there's eve4n a (cold-water) Jacuzzi on deck!

In addition, the boat offers the most scenic fitness room on the planet, overlooking the river and the jungle. . .

Most cruises enter the famed Pacaya Samiria Reserve, a world filled with birds adorned in neon-brilliant colors, playful Amazon monkeys, graceful hawks and herons, pink dolphin, three-toed sloths, and - if you're lucky - the black jaguar. and a kaleidoscopic array of millions of butterflies. You'll have the chance to see hundreds of species of Amazon wildlife, including the endangered pink Amazon dolphin, the three toed sloth--and perhaps, if you're lucky--a sleek, black jaguar.

In this rainforest, the sights and sounds and colors and fragrances will be unlike anything you'll ever experience again. Parrots and macaws and black howler monkeys will watch you glide by. Iguanas will laze in the sun on the river banks, while alligators will be cooling off in the river. You might even spot one of the Amazon's legendary boa constrictors

This is a great way to experience, in depth, the heart of the Amazon...in luxury that those earlier explorers would have no doubt welcomed!