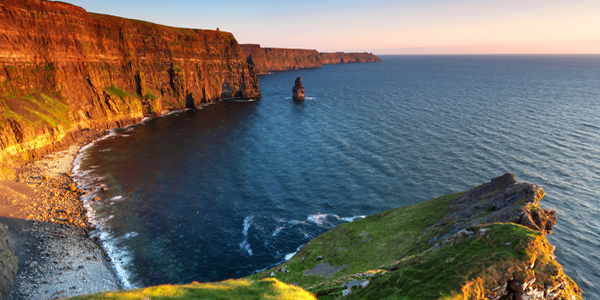 The Gathering: Ireland Puts Out The Welcome Mat 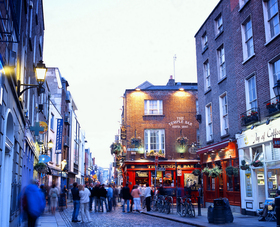 The Temple Bar - established in 1840 - is a classic Dublin watering hole. (Courtesy The Travel Corporation USA)

Ireland is a feast for the senses.

The sight of winding country roads lined by thatched cottages, with generations of "the ancestors" buried in the back. The sounds of the local pub on "Traditional Music Night," when happy singing and laughter echo into the night. The aroma of the ubiquitous peat soil, which warms many an Irish hearth in those cottages. The overwhelming presence of a history burdened by sadness, but also buoyed by creative and literary genius. The feel of the damp, cold stones in the ancient Roman towers of the Wicklow Mountains. And the fragrant aroma of thick wet grass...everywhere.

Ireland is a country of myth, of heroes and kings and saints, of bagpipes and step-dancing and story-telling and friendly faces.

This year, the country is staging "The Gathering," a year-long festival of Irish culture, history, and folklore, with special events taking place from the storied Cliffs of Moher in the West to the literary alleys of Dublin in the East, from Cork by the Celtic Sea in the South to Aran Island in the windswept North.

A company called Brendan Vacations, located in Los Angeles and with an office in Ireland, is offering unique "The Gathering" tours, with special features such as lunch in a private home with a local expert on W.B. Yeats, or a Bodhrán (Irish Drum) lesson in one of Ireland's oldest pubs. 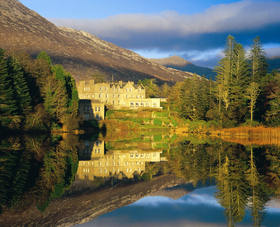 In the capital city of Dublin, you'll visit Trinity College, where you'll stop into the Gothic library to see the magnificent Book of Kells, an ancient religious manuscript that's hand-painted. You'll stop at St.  Stephen's Green, where it seems all of Dublin comes to play on nice days. You'll browse the shops of Grafton Street, where you'll find everything from clan kilts to antique books to cashmere sweaters to Waterford Crystal.

You'll ponder Ireland's tumultuous history as you stand before the Customs House and the statues of famous Irishmen such as Daniel O'Connell and Charles Parnell (along with a statue of a mythical Irish "every-woman" named Molly McGuire). You'll pause at one of the bridges going over the River Liffey, and take in the 360-degree street-life swirling around you. And you'll probably stop at the Guinness factory, home of Ireland's most popular export.

During the Gathering, the country will be staging hundreds of special events and festivals.

Not far from Cork, in the south, there'll be plenty of celebrating going on at Blarney Castle, where visitors will be assisted in leaning over backward and kissing the Blarney Stone.

In the rural west, where some people still speak Gaelic, there'll be story-telling and limerick events in the town of Limerick, and the echoes of the ancient past will be re-awakened at Bunratty Castle.

In the beautiful Wicklow Mountains, you'll travel on winding, high-country roads in and out of mountains bathed in fog one minute and sunshine the next. In County Clare on the west coast, you'll stand atop the Cliffs of Moher, reddish-brown walls looking down on the Atlantic from 700 feet above. 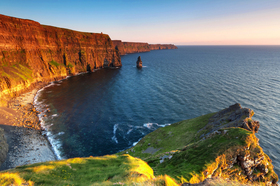 The Cliffs of Moher is a place of ethereal beauty. (Courtesy The Travel Corporation USA)

In a year filled with special events, the most special one - of course - is St. Patrick's Day. The Irish will celebrate the day Saint Patrick chased the snakes out of Eire with marching bands, spirited dancers, bagpipers, colorful floats, and just plain old fun - "craic."

One of the best places to celebrate St. Patty's Day is at that most Irish of institutions - the pub. It's a place to catch up on gossip; to argue about whether Oscar Wilde was a better writer than James Joyce; to enjoy "Traditional Music Nights"; or to just sit back with a couple of "mates" and savor a "pint Stout" (Guinness) and a pack of "crisps" (potato chips).

During the Gathering, you'll probably make a lot of new friends here. And you can toast them with a hearty Slainte! - "To your health!"