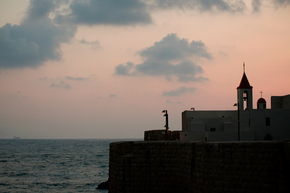 An ancient city with spires and citadels and thick sandstone fortress walls juts out into the Mediterranean, looking more like a mirage than a city in 2012.

In Akko, the past is revered, and each street and square holds its own ancient secrets.

This was a thriving city, and a center of commerce and knowledge, when most of the rest of the world was barely out of the Stone Age. And, located as it is at a crossroads of religion and the tides of history, Akko is a treasure.

Akko (also called Acre) has a population of 46,000, with a substantial Muslim presence (28%), and a history of neighborly relations between different religious and ethnic communities. It's located on the coast of northern Israel, about 20 miles south of the port city of Haifa. And history is so much a part of the Akko mosaic that the city is a UNESCO World Heritage Site - one of seven in Israel.

Behind the fortress walls, and scattered amidst the winding alleys and streets and underground passages of the Old City, there are Crusader-era churches, an old Turkish bathhouse, an ancient inn, a Christian monastery, the skyline-dominating El Jazar Mosque, and Ottoman 18th and 19th century citadels and mosques, from the days of the Ottoman Empire. And there are also great halls built by the mysterious Knights Templar, with an extraordinary Templar tunnel and new archeological finds all the time. 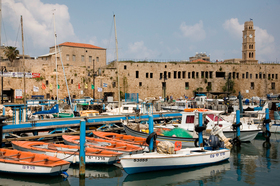 Akko has always lived by the bounty of the sea. (Courtesy Israel Ministry of Tourism)

Akko was the commercial link between Egypt and Phoenicia over 4,000 years ago. It was the capital of the Crusader Kingdom from 1104 to 1291...and still has many structures from that era.

Remarkably, much of Medieval Akko - both above and below ground - has survived the tides of history pretty much intact.

Here, you can follow the footsteps of the Romans and the Crusaders and the Mamluks and the Ottomans. Even Napoleon Bonaparte, believe it or not, tried to capture Akko, by laying siege to the city in 1799. But, after two months of repeated - and fruitless - assaults, he retreated in humiliation.

One of the best things about Akko, though, is that you can follow up your wanderings through the Old City with nouvelle cuisine and Twenty-First Century nightlife. The beachfront is dotted with world-class boutique hotels and high-end restaurants. 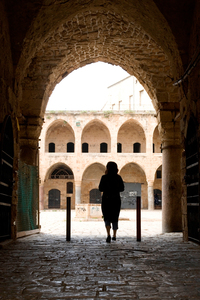 People have walked on these stones for thousands of years. (Courtesy Israel Ministry of Tourism)

Because of its unique ethnic and cultural mix, Akko is the scene of a number of great art, music, and folk festivals every year. The colorful open-air market in the Old City is always bustling, especially on weekends, and it's the home of Israel's most famous falafel restaurant, Humus Said. (It's so popular that you'll have to wait. But don't - under any circumstances - give up your spot in line. It's worth the wait!). In the harbor, local restaurants serve the fresh catches that the fishing boats have brought in that day.

Not far away from the city is the beautiful Bahai Garden, built by members of the Bahai religion in Israel.

You can't take a step in Akko without feeling the pull of history, and the people who've inhabited this place over the ages. But, as you'll see when you promenade along the sea wall in the evening, there are a lot of Twenty--First Century inhabitants enjoying it, as well!