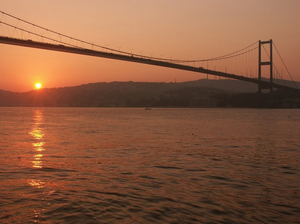 (ISTANBUL, TURKEY) -- Istanbul has seen a 30.1% increase in tourist revenue, generating an estimated $10.2 billion in 2011, surpassing New York and Amsterdam in terms of the number of visitors according to a city index developed by MasterCard Worldwide.

Estimates from the city index suggest that Istanbul will receive a predicted 9.4 million visitors in 2011 proving more attractive than traditionally popular global cities such as Rome, Milan and New York.

With a rich cultural background, abundance of amenities and rising economic wealth, Istanbul is propelling Turkey forward with the country's economy growing by 11% in the first quarter of 2011 according to figures published by the Turkish Statistical Institute, Turkstat.

As a whole, Turkey's income per capita has almost doubled since 2002 and as a result, has generated a boom in consumer spending, seeing a rise in the shopping mall culture, proliferating across the country as well as trendy restaurants, bars and clubs lining the streets becoming even more prevalent than the widespread Ottoman mosques.

Indeed, with more money to play with, consumers, in particular the middles classes have begun to travel a great deal more aided by the growth of national flag carrier, Turkish Airlines. However one of the biggest emergences to have come out of rising consumer wealth has been the increased demand for property with more people buying new homes.

Rising demand led to Turkey's construction sector displaying an impressive 17.1 percent growth in 2010 over the previous year. This sector has been driving economic growth in the economy over the past few years, seeing improved technology utilized and stronger financial structures helping construction companies to deliver property projects at a faster rate.

Back in May this year, PricewaterhouseCoopers Emerging Trends in European Real Estate report which surveyed worldwide investors found that Istanbul is currently considered along with Munich, to be the best city in Europe for investment opportunities in the areas of new developments and acquisitions, and second best for opportunities to increase returns on existing investments.

Ray Withers, Director of property investment experts, Property Frontiers, comments, "The Turkish property industry is receiving considerable interest from foreign investors seeking to purchase property in popular cities like Istanbul due to the ongoing growth in the economy and rising tourist numbers, pushing up demand for property and generating vast opportunities in the already thriving rental market.

"Istanbul, considered to be the dominant powerhouse in Turkey is fast becoming a popular destination for Europe's glitterati as well as a thriving business hub with new residential developments emerging in up and coming areas on the desirable European side of Istanbul such as Bahcesehir and Beylikduzu as well as the city centre. Modern Istanbul properties offer exceptional facilities and a cheaper price tag than the rest of Europe, making the city even more attractive to potential buy to let investors."

(Carlsbad, Calif.) - Hoping to turn discouraged golfers into happier players who are eager to return, Carlsbad plans to spend $80,000 to revamp the final hole of its The Crossings at Carlsbad course.

The City Council recently voted to rework the hole and do some erosion control at the property, after a November report from a golf industry consultant suggested that the course was so frustrating to play that people didn't want to come back.

The Crossings ---- which occupies 400 extremely hilly acres along Palomar Airport Road just east of the Legoland California amusement park ---- has struggled financially since it opened in summer 2007 just as the nation's economic recession began.

The course's eye-popping construction price tag of about $70 million gave it the dubious distinction then of being the most expensive municipal golf course project in the nation. In the years since, the city has reportedly chipped in about $1.8 million annually from its general fund to keep the place afloat.