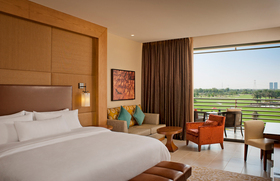 The resort is owned by the Tourism Development & Investment Company (TDIC), the leading developer of cultural, residential and tourism destinations in Abu Dhabi. The Westin Abu Dhabi Golf Resort & Spa marks the launch of the Westin brand in the emirate.

The Westin Abu Dhabi Golf Resort & Spa boasts a prime location along the fairways of the championship Abu Dhabi Golf Course, which underwent extensive upgrades in January 2011 and is managed by Troon Golf, the world-renowned luxury golf course management company. Additionally, the Westin is the only hotel in Abu Dhabi to offer sweeping views of the putting green from all guest rooms. Close to the heart of down town, the newly constructed hotel is just a ten-minute drive from the exhibition center and 20 minutes from the Corniche.

"We are excited to introduce the Westin brand in Abu Dhabi in association with the Tourism Development & Investment Company and with this opening, we hope to elevate the emirate's position as a leading tourism destination in the region," said Roeland Vos, President, Starwood Hotels & Resorts, Europe, Africa, and Middle East.

Vos continued, "We believe that the hotel will be a leading wellness retreat in Abu Dhabi s emerging centre." 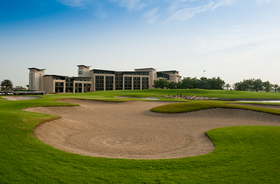 The Westin Heavenly Spa consists of six treatment rooms and an outdoor relaxation area in a tranquil garden setting. Guests can experience a range of Heavenly packages and specially-developed treatments targeted at golfers such as the Golfer's Recovery.

"This is a momentous year for TDIC as we are achieving a number of significant delivery milestones, of which the Westin Abu Dhabi Golf Resort & Spa is one," said Ali Al Hammadi, Executive Director of Project Services at TDIC. "We are delighted to collaborate with Starwood, with whom we are working very closely to build this landmark destination, and we are looking forward to a successful launch."

Beach Resort & Marina in Dubai, and The Westin Jeddah in Saudi Arabia (currently closed for a complete renovation). The brand continues to grow its presence in the Middle East with nearly 25 new hotels slated to open in the next few years, including The Westin Saraya Aqaba in Jordan and The Westin Muscat in Oman.

The island is being transformed into a leisure, cultural and residential destination. TDIC is also behind the unique Desert Islands project, one of the world s largest sustainable island tourism destinations currently under development.

(EL GOUNA, EGYPT) -- With growing demand for real estate on the beautiful Red Sea Riviera, Orascom Development is building two new developments to add to its property portfolio in the self-contained waterfront town of El Gouna.

Joubal, with its unique landscaping and elevated perspective, offers stunning views across the Red Sea marina. The development consists of signature villas and apartments which allow homeowners to escape the hustle and bustle of everyday life and be reinvigorated among peaceful surroundings.

The fully-furnished apartments range from cozy studios to spacious three-bedroom residences all with a contemporary twist featuring traditional Islamic architectural elements, such as domes and arches. Joubal residents will enjoy the exclusive clubhouse, situated in the heart of the development, which features a large community swimming pool and a range of luxurious amenities.

Ibis Island, set on a private island in the Ancient Sands Lagoon, has just 28 generously-sized turn-key villas, all with lagoon frontage, private swimming pools and views towards Mangroovy Beach and the Red Sea's sparkling emerald waters.

With more than 20 years experience, Orascom is a leading global developer of fully integrated towns, offering hotels, private villas and apartments, leisure facilities such as golf courses and marinas along with all related facilities and supporting infrastructure. The Group operates projects at different stages of completion in Egypt, Jordan, United Arab Emirates, Oman, Switzerland, Morocco, United Kingdom, Montenegro and Romania. Currently, the Group manages four destinations: El Gouna, the flagship project on the Red Sea Coast in Egypt, Taba Heights on the Sinai Peninsula in Egypt, The Cove in Ras Al Khaimah in the U.A.E. and Haram City, the affordable housing town in the outskirts of Cairo in Egypt.

Starting out as a simple real estate project more than 20 years ago, El Gouna is now OD\'s flagship resort. El Gouna is built on 10km of secluded coastline, has 25,000 residents spread across islands and lagoons and is the only mature fully fledged town on the Red Sea Riviera. The year-round sunshine destination boasts world-class amenities including 16 hotels, 100 bars and restaurants, marinas, an 18-hole golf course and a variety of retail spa and fitness facilities. El Gouna also houses award winning architecture and the first hotels in Egypt to be awarded the Green Star Hotel Certification.