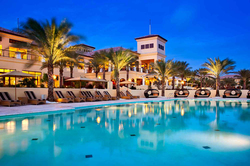 Back of hotel and pool at night

The new resort, situated along a natural harbor known as Spanish Water, 25 minutes from Curaçao's capital city of Willemstad, marks a new level of luxury and service to this island destination. Part of the much larger 1,500-acre Santa Barbara Plantation resort community, the 350-room beachfront Hyatt resort features Old Quarry by Pete Dye, the island's only 18-hole championship resort golf course, Atabei Spa, an eco-friendly holistic retreat inspired by the island's ancient traditions and rituals, and a full-service, six-slip marina. 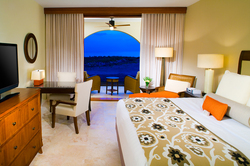 The resort was designed to immerse guests in Curaçao's rich culture and heritage through a variety of activities highlighting the island's distinctive local flavor. From Camp Arawak, where children age 12 and under have the chance to explore the natural surroundings during cave hikes and iguana feedings, to the Lama Salt Bar which allows spa goers to create customized body scrubs from a selection of indigenous sea salts, herbs and aromatic oils, to an extensive farm to table dining program, guests will walk away with a true taste and feel of Curaçao.

"Curaçao is a vibrant and captivating destination, and we are thrilled to bring Hyatt's authentic brand of hospitality and extraordinary service to the island," said resort general manager Diego Concha. "We've worked diligently to capture Curaçao's colorful culture and undeniable charm throughout the resort, and we look forward to sharing this with our guests." 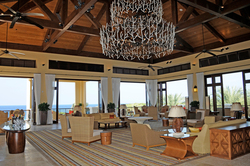 Located in the southwestern Caribbean, Curaçao offers an eclectic mix of history and culture. With a Dutch influence and European flair, the island is known for its sophistication, eco-tourism and pristine diving conditions. In addition to offering sun, sand, sea and diving, Curaçao also provides many cultural, historical and ecological points of interest that appeal to the discerning visitor.

(PALM CITY, FL) -- Wayne Huizenga is no longer in the golf business. The South Florida billionaire recently sold his private Floridian Golf & Yacht Club for a reported $25.6 million to a Texas entrepreneur who plans to add more amenities to the property and maintain a local residence in the area.

"I think Wayne was ready to sell, that was pretty much public," Crane told a local Treasure Coast reporter. "I decided it was a beautiful place, and I am a golfer and have been a member of the club for a year and a half. ... It's a great purchase."

Crane, based in Houston, said he plans to build more cottages for the ultra-exclusive club and a new fitness center for members.

"We'll keep the staff intact and probably add more jobs so it will be a positive for the community," Crane said. "I am still working with architects and developers to ... figure out what our strategy will be."

Fort Lauderdale-based Huizenga Holdings said the sale was a "private transaction" and declined to comment.

"I've met (Huizenga) numerous times, played some golf with him but we've never done business together, other than this deal," Crane said. "He's a great guy. I guess he thought it was time to turn it over to someone to move it forward. It's a deal that worked for him and worked for me."

Huizenga, under his company Stuart Property Holdings Ltd., started amassing property connected to the golf course in 1982, according to public records. The deed includes 12 properties in Martin County, which previously sold for $2.6 million collectively, and four in St. Lucie County, which together had a price tag of $5 million, according to local reports.

"He still owns property and owns a home there (in Martin County)," Crane was quoted as saying As far as my knowledge, he told me he would continue to be a member and spend time there," "We're happy to have him around."

In March, Huizenga ranked No. 463 on Forbes magazine's list of "The World's Billionaires" with a net worth of $2.1 billion.

Huizenga, 72, turned a small trash-hauling operation into waste-management juggernaut WMX Technologies, resigned in 1984 and shifted to movies. He bought the 19-store video rental chain Blockbuster in 1987, expanded it and sold the business to Viacom seven years later for $8.4 billion, according to Forbes. He sold the Miami Dolphins for $1.1 billion last year, but still owns 5 percent of the team.

Huizenga and wife Marti, who recently celebrated their 38th wedding anniversary in April with a large fireworks show at the club, are two of the area's largest philanthropists having given millions to local charities over the years. More than 200 guests attending the anniversary bash, including former Dolphins quarterbacks Dan Marino and Bob Griese, talk-show host Rush Limbaugh and Welch.