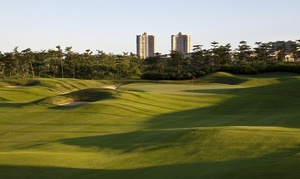 It is Schmidt-Curley's second design at Clearwater Bay for the Agile Group, one of China's leading property developers. The par-72, 7,035-yard layout is Schmidt-Curley's 13th course to debut on Hainan Island, epicenter of the Chinese golf course construction boom, since 2009.

Set on terrain dotted by picturesque lakes and groves of stately coconut palms, the B Course features a variety of bunker styles. They include steep, grass-faced, sandy waste areas and a number of penal pot bunkers. Water also comes into play on nine holes.

"The B Course has a unique look that relatively few projects in China have embraced," says Lee Schmidt, who co-founded Schmidt-Curley Design with Brian Curley in 1997. "Despite the prevalence of hazards, it's a design players of all abilities will enjoy. We were sure to provide plenty of width to playing corridors, and bunkers are typically flat-bottomed giving them more bark than bite." 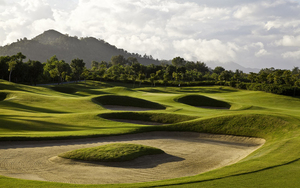 Two short par fours are highlights. Players who challenge a bunker and lake down the right side of the 380-yard third hole will be rewarded with a short pitch to the green. Those who select a safer line off the tee will be left with an exacting approach, especially when the pin is back right.

The 15th Hole is a 337-yard par four with an exceptionally generous landing area. The putting surface, however, is perched three meters above the fairway and protected by deep bunkers and grass hollows.

The B Course ideally complements Clearwater Bay's par-72, 7,333-yard A Course. Opened in 2009, it is characterized by high-flashed bunkers and several windswept, seaside holes.

Architect of record for all 10 golf courses at the new Mission Hills Hainan -- host of this fall's Omega Mission Hills World Cup -- Schmidt-Curley has two fully-staffed Asian offices (Haikou and Kunming, China) in addition to its Scottsdale, Ariz-based U.S. headquarters.

(JACKSON, MO) -- Bent Creek Golf Course here in Missouri is giving the housing market a shot in with the launch of Phase VI of their golf course community.

"Phase VI of construction recently began and there's a lot of enthusiasm among current residents," says Rob Litzelfelner of Bent Creek Development. "There have also been a number of inquiries from the community about when they can expect to see the homes and begin purchasing."

Though construction is currently in the early stages, Litzelfelner says he hopes to see new home construction within the next few months.

"We have space for luxury duplexes and single-family homes," Litzelfelner added, "and builders are being contacted and construction will begin soon."

Though some builders might be fearful to begin construction right now, Litzelfelner attributes part of Bent Creek's success to the high-demand for golf course community living.

"Once people arrive at Bent Creek they're instantly intrigued," he says. "Residents get high-quality homes at affordable rates in a fantastic community. In fact, we now have over three hundred families that call Bent Creek Community their home."

Built in 1990, Bent Creek Golf Course is a championship golf course nestled in the rolling hills of Southeast Missouri. This golf course has hosted hundreds of events in its twenty-one year history. As a home course for many area golfers, Bent Creek attracts visitors from not only the Cape Girardeau and Jackson area but the entire Midwest as well. Bent Creek is known to be the best golf course between St. Louis and Memphis and was rated as one of the top public courses in Missouri by Golf Digest.