Arnold Palmer is arguably one of the most marketed athletes of the modern era. In fact, when Cleveland lawyer Mark McCormack made a handshake deal with Palmer in 1960 to represent him as his agent, the partnership marked the beginning of the multi-billion-dollar sports management and marketing industries. 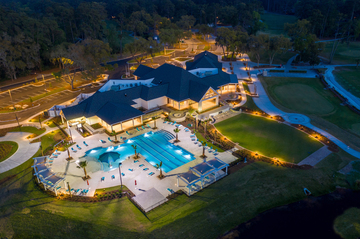 Sixty years later, Arnie's Army is still going strong and the Landings Club on Skidaway Island, Ga., is betting the Palmer brand will be as beloved as ever after the grand reopening of its completely renovated Marshwood clubhouse last June with two new Palmer-inspired dining venues. For Landings Club executive director Steven Freund, "Arnie's Tavern," or 19th hole, and the signature  "Palmer's Steakhouse" in the main dining room, represent a unique partnership with the Palmer family and couldn't be more fitting considering Palmer designed the original Marshwood course in the mid-1970s.

"Mr. Palmer was an integral part of the promotion of the community or putting it on the map because he designed the first two courses," Landings Club executive director Steven Freund says. "Yet, when I arrived here, the one thing that was glaringly absent was any reference to Mr. Palmer except for the road entering the campus (Palmers Draw). That was it. There wasn't a picture; there wasn't a room; nothing that drew attention and recognized his contribution. We neglected that part of our club's history. 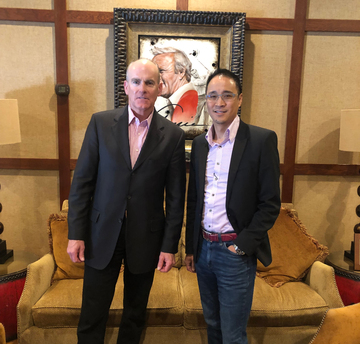 "When we were considering the renovation of the clubhouse, we said this is a great opportunity to honor his influence and his name. Marshwood was the cradle of Landings Club civilization. Yet we had a clubhouse that was like a developer clubhouse. I don't mean to be critical because it was good enough to sell homes and memberships but there was nothing remarkable about it. It didn't make a statement and our members knew that and understood that."

In other words, this Savannah-area member-owned club of some 4,400 resident members is finally getting a clubhouse fit for a King. Or at least the King of Golf. The new Palmer restaurant isn't the first one in America. That distinction goes to La Quinta, Calif., where "Arnold Palmer's" opened in 2004, about a mile from Palmer's former home at the Tradition Golf Club.

Freund says Howard Kuo, whose Kuo Diedrich Chi architectural group redesigned an estimated $26 million worth of club amenities for the Landings since 2017, was the person who connected the Palmer family to the Marshwood clubhouse project. After various meetings with principals overseeing the late Palmer's business interests and visiting Palmer's longtime Florida home, Bay Hill Club and Lodge in Orlando, the Landings got the Palmer group's brand blessing and support to use an assortment of Palmer-inspired likenesses/photos.

For instance, one of the things Kuo designed for Arnie's Tavern are bar lights designed in the shape of miniature umbrellas, the iconic symbol of the Palmer brand. Kuo was particularly keen on designing this venue with a fun "throwback theme," highlighted for example by blowing up classic black and white imagery from the "strapping younger Palmer" days when he used to fly jets and smoke cigarettes. 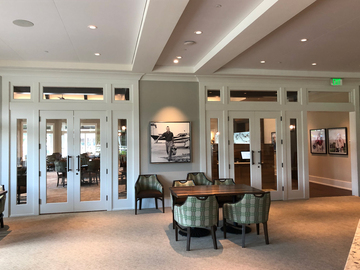 Meanwhile, Arnie's Steakhouse reflects a more elevated level of decorum, according to Freund, something that honors the traditions and timelessness of private clubs. For instance, members experience a white table-cloth environment with special glass settings, silverware and china. To further set the mood of this casual yet elegant restaurant, Kuo's team accented the walls with more "warm colorful pictures of Arnie from his later years."

"Everything we're doing, all the way down to the design, décor, menus and lighted glass things are basically creating an homage to Mr. Palmer," Kuo adds. "And trying to link him to the work and his impact at the Landings."

To help celebrate the exciting new Marshwood clubhouse, Palmer's grandson/PGA Tour player Sam Saunders was recently invited as the guest of honor during a subdued pandemic ceremony with a couple dozen members in attendance. 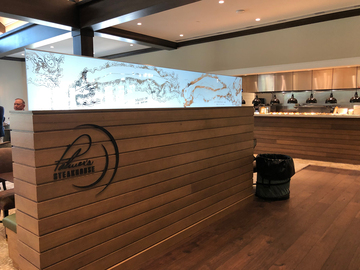 "I have to tell you this is something my grandfather would be incredibly proud to see what you've done here," Saunders said with his Palmeresque genuine and charismatic smile. "Not only to take the effort to enhance your club and make a huge commitment to the future of this place, but to have his name re-associated with it and rebranded with it. To honor his memory for what he did here, I know it would mean the world to him.

Saunders, who has a home at Atlantic Beach Country Club near Ponte Vedra, Fla., went on to say: "Palmer's Steakhouse looks pretty good. I might have to come back and have a meal someday."

Freund then turned to him and said with a smile, "We can arrange that." And probably throw in a few refreshing Arnold Palmers as well.