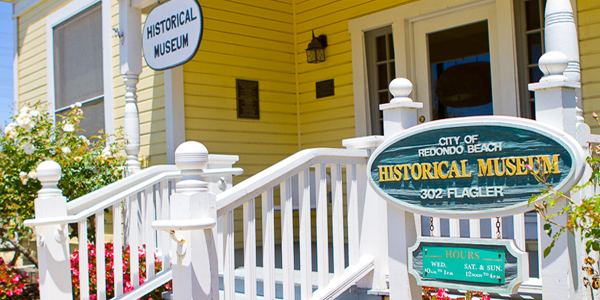 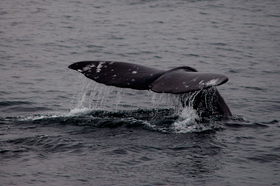 Redondo Beach is one of those "quiet" Southern California surprises, where the crowds are thinner than in other hot-spots in this region...but the city is every bit as delightful.

For one thing, this charming town, which has managed to keep its small-town flavor despite its location in this bustling region, is home to one of the longest beaches in America. The sands run for 27 miles, from Torrance to Santa Monica. They're flanked - for that entire distance - by a county path that's filled with walkers, skaters, and cyclists. And this beach has long been known as one of America's premier spots for surfing.

Redondo Beach is just seven miles south of Los Angeles International Airport (LAX), but a million miles removed in terms of the hustle and bustle. It's an historic beach town with a laid-back lifestyle. Once part of a thriving commercial port, the Redondo Beach Pier now boasts eclectic, one-of-a-kind shops and six restaurants. There's also a sea-front esplanade that's been called one of the most romantic sunset spots in the world.

Once the pride and joy of the California coast, The Pier is going back-to-the-future, to reclaim its glory days. Its vintage buildings and public areas are being renovated, shined up, and restored. 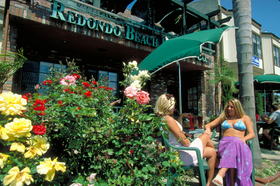 The shops and restaurants of Riviera Village are funky and fashionable. (Courtesy Somerville Associates Marketing Communications)

The Redondo Landing, the gateway building to The Pier, has been rebuilt in the style of the original Looff Hippodrome, the landmark carousel built on the Santa Monica Pier in the 1920's. The building now contains vintage historical photos of The Pier, along with other artifacts.

When Redondo Beach was incorporated in 1892, it was home to 688 souls. Within a decade, though, it had three commercial piers, making it the busiest port between San Francisco and San Diego. And this maritime heritage is brought to life again at the hands-on science center called S.E.A. Lab.

If you come to Redondo between November and April, you can take part in the most popular local pastime - Whale Watching. This is when the pods of magnificent gray whales migrate to Baja California, and you can often see them from shore, or, even better, from one of the whale-watching boats that go out from the marina. If you get close enough to see these leviathans shoot out of the water and then dive back in, with a grace and beauty that belies their size, you'll remember it the rest of your life.

Also in the water - only 75 yards from shore - is Redondo Submarine Canyon, a rare watery canyon with colorful marine life.

Shopping - as well as dining and nightlife - in Redondo revolves around The Pier and a six-block area called Riviera Village. This is a fashionable collection of boutiques and cafes at the south end of town. It was once called the Hollywood Riviera, because the Hollywood set was seen here all the time, buying up pricey items for their Beverly Hills mansions.

If you only go to one shop in Redondo Beach, make it Harmony Works, where "Earth-friendly" takes on a whole new meaning. Here, even the display cases have been re-purposed from junkyard items. Shelves are lined with everything from books, music, body products, art, and baby products to candles, small fountains, and greeting cards. The music selection ranges from ethnic to spiritual to "world." And most of the books deal with topics such as the metaphysical or the spiritual. 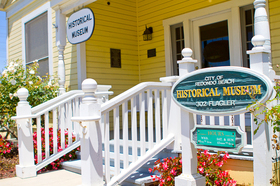 Other interesting spots include the Redondo Beach Historical Museum, which is a 1904 cottage in a  hilltop area called Heritage Court, and Hopkins Wilderness Park. Then, of course, there's the "play" area - the city's lagoon, where you can try just about every type of water sport conceivable...and some that you probably haven't conceived of yet.

Lodging of choice for many visitors to Redondo Beach is the Palos Verdes Inn...the memorably-named Plush Horse Inn when it opened in 1959!

The beauty of Redondo Beach is that it's convenient to everything in
Southern California...but very much a unique coastal community with a lifestyle and an identity all its own.

And, of course, that wonderful beach.