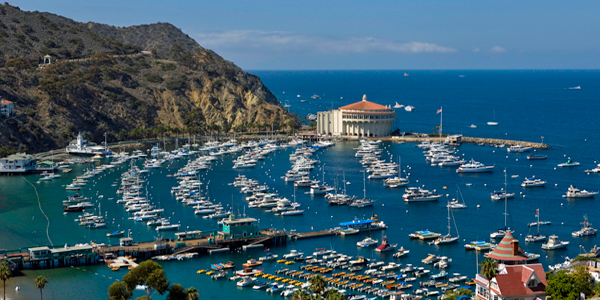 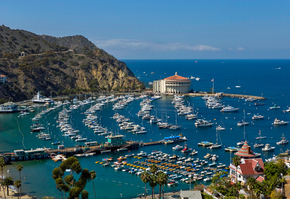 Santa Catalina Island became famous because of a 1958 song about "the island of romance" that was "twenty-six miles across the sea."

But a lot of people - very famous, very wealthy people - actually knew about it long before that.

The island was purchased by William Wrigley, Jr. (of Wrigley's Gum and Chicago Cubs fame) in 1919 - sight unseen! He developed it as a resort, and a spring training home for his Cubs. He also opened the island up to film production, and several hundred were filmed here. There's a living legacy to those days. To film a movie based on a book by Zane Grey, the producers brought 14 buffalo here in 1924. The scenes of the island were cut. But there are now some 200 buffalo roaming the interior.

Charlie Chaplin and his wife Paulette Goddard were frequent visitors.  So were Mr. and Mrs. James Cagney, Hollywood producer Cecil B. De Mille, and Clark Gable.

Zane Grey liked it, too. In 1926 he built a pueblo-style home on the hillside overlooking Avalon Bay.  He spent most of his later life here, writing some of his 89 books. His home is now the Zane Grey Pueblo Hotel.

Most people who live here - there are 3,500 in the main town of Avalon - don't have cars. (There's a 20-year wait-list.) The main means of transport is golf carts. But the best means is self-propulsion. Avalon's great for walking; it's a charming village on a harbor, with beautifully-restored homes, shops, and restaurants. 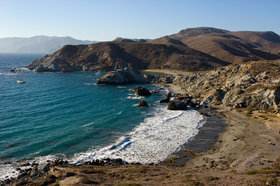 Your footsteps might be the only ones. (Courtesy Catalina Island Chamber of Commerce)

Catalina Island's landmark is the striking white Casino, an Art Deco treasure built in 1929. There's no gambling, though; the building was actually named after an Italian word meaning "place of entertainment." Inside is the Catalina Island Museum, with an outstanding collection of artifact, historic photographs, and Catalina tile and pottery.

Another landmark is Chimes Tower, which has been ringing every fifteen minutes since 1925. And the distinctive Holly Hill House, built in 1890 with a red roof and striped cupola, has been faithfully restored by its current owner.

The 42,000 acres of Catalina Island's vast interior offer great camping, hiking, horseback riding,  mountain-biking, and jeep eco-tours in a protected wilderness. On your rambles, you might see Catalina Island foxes, quail, bald eagles, and, of course, the buffalo.

You can experience some of the best snorkeling and diving in the world, or take a tour on a glass-bottom boat or semi-submersible submarine. And there's also parasailing, kayaking, electric-bike tours, and the Zip Line Eco-Tour, in which you'll zip 4,000 feet from mountains to sea - 300 feet above the canyon floor at speeds of up to 40 miles per hour. You can play golf at the Catalina Island Country Club. Or you can SNUBA...diving up to 20 feet beneath the water without heavy equipment.

For a great place to stay, check out the Hotel & Ristorante Villa Portofino, a classic European-style resort on the waterfront. This AAA Triple-Diamond property has 35 beautifully-appointed rooms; and some of the suites have fireplaces, marble baths, and balconies with great views.

The Ristorante Villa Portofino has received the coveted Three Star Award for three consecutive years from the California Restaurant Writers' Association.  The décor is Mediterranean, the views are great, and the food is reminiscent of that other Portofino.

The best way to traverse these "twenty-six miles across the sea" is via Catalina Express, which departs from three Southern California bases. The high-speed boats make the trip in about an hour. And they offer upgrades to make your trip more relaxing, such as the Commodore Lounge or the Captain's Lounge.

Be forewarned, though. Once you come to "the island of romance"...you may not want to go home!