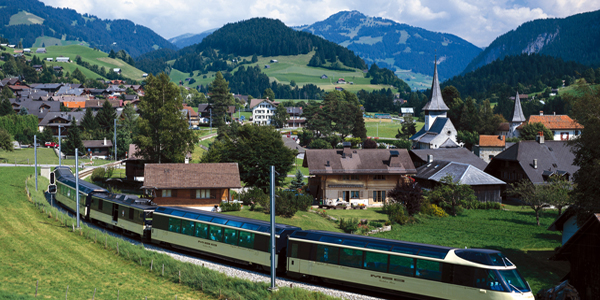 Switzerland by Train: A Land of Contrast 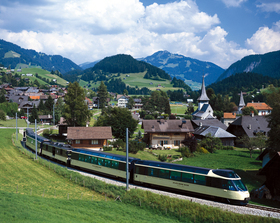 When we think of Switzerland, a lot of images come to mind...

Medieval towns and villages. The magnificent Alps, snow-covered and jutting into a crystal-clear sky. A colorful ethnic mix of German, French, and Italian ancestry. Great food. And sophisticated international cities.

A company called Trafalgar can put you in the picture...aboard the comfortable, modern trains of the Swiss Travel System. Trafalgar's "Contrasts" tour can show you five of Switzerland's most beautiful cities and towns.

You'll see Zermatt, in the German-speaking part of the Canton of Valais...and completely car-free! It's located at the foot of Europe's most famous mountain, The Matterhorn (14,690'), and surrounded by 37 other peaks of over 13,000 feet. The Matterhorn was first conquered on July 14, 1865 by a climbing party from England. But it was hardly a triumphant assault - four of the eight men died.

Zermatt has 350 km of prepared ski runs extending to Italy in winter, and even 20 km of summer ski runs. It boasts Europe's highest aerial lift, to the Matterhorn glacier. The highest restaurant in Europe. Europe's highest open-air railway on the Gornergrat cog-train. The highest hotel in the Swiss Alps, Kulmhotel Gornergrat. And 400 km of hiking paths, 100 km of mountain bike paths, and 12 Nordic walking routes 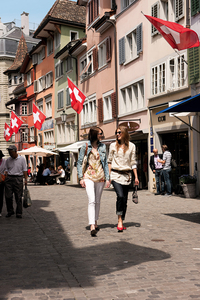 The city of Lucerne sits on the lake of the same name, and boasts excellent museums, theaters, and festivals. The paddlewheel-steamer ride on Lake Lucerne puffs past picturesque mountain villages and valleys blooming with kaleidoscope-colored wildflowers. You might top it off with a ride on the world's first CabriO® cable car, on Mt. Stanserhorn, a double-deck aerial cable car. A great reward awaits at the top - the Rondorama revolving restaurant, with incredible views.

Visitors have been coming to the town of St. Moritz for 150 years, partially because of the mineral springs here, which the natives have been using for 3,000 years. The springs have serviced many a European royal family, who've come here to enjoy the healing waters with the majestic views that are as healing to the psyche as the waters are to the body.

The German-speaking city of Zurich, population of 370,000, is bisected by the Limmat River.  Downtown has over 50 museums and 100 art galleries, and the liveliest nightlife in Switzerland.

Old Town is filled with art galleries, antique shops, and 25'-long sidewalk chess boards, where you can watch players pick up giant pieces and move them around the board. Bahnhofstrasse is an exclusive shopping area connecting the main railroad station to Lake Zurich. Augustinergasse is one of Zürich's most beautiful old, narrow streets, adorned with vividly-colored windows and flower boxes. And St. Peter's Church is the oldest in Zurich, dating back to the 800's; it also features the largest clock face in Europe, measuring 28.5 feet.

For a true taste of Zurich, head for Raclete Stube; in addition to the ubiquitous Swiss fondue, the restaurant features a local specialty called raclete, a wonderful mix of pickles, onions, potatoes, and melted cheese.

The French-speaking city of Geneva is symbolized by the Jet d'eau - a fountain with a 460-foot-high water jet at Lake Geneva. Old Town, a lively shopping district, sits on the lake; it's filled with piers, lakeside promenades, nightspots, and elegant shops.

Geneva's endowed with a vibrant cultural life. Famous artists perform in the Grand Théâtre and Geneva Opera House, and an eclectic range of museums is symbolized by the Musée international de l'horlogerie, a museum with a wonderful collection of jewelry, watches, and musical clocks. 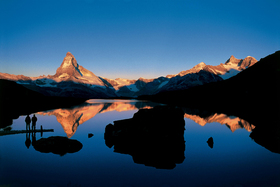 A picture really does tell a story. (Courtesy Switzerland Tourism)

The fifth city on your "Contrasts" railroad tour is Interlaken, sitting at the foot of another world-famous mountain - the Eiger (13,025 feet). Interlaken offers recreational experiences on mountains, water, and in the air. You'll see boaters, canoe-ers, and rafters on the rivers below; hikers, bikers, and climbers on the peaks and the meadows; and para-gliders in the skies above. Afterward, celebrate on a dinner cruise on Lake Brienz.

Wherever you stop on the "contrasts" tour, make sure you try the chocolates. They're even better than you've heard!