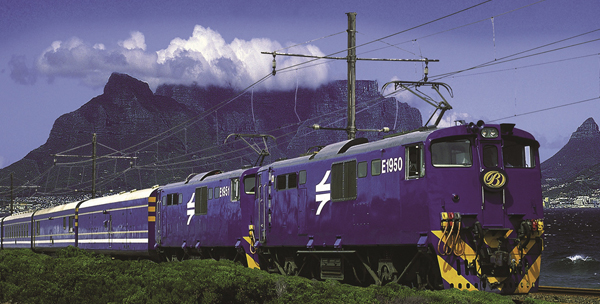 The Blue Train, a Five-Star Hotel on Wheels

Since 1946, it's transported presidents and kings and potentates through the mountains, deserts, savannahs, and veldts of South Africa. With an elegant ambience reminiscent of a gentler age, it offers a lucky few the chance to take a trip through a time-machine, as well as some of southern Africa's most stunning landscapes.

For the Empire-builders of old, a train through the uncharted African interior, from Cairo to Cape Town, was a visionary's challenge...and a railroad builder's nightmare! But in the late-19th-Century, some of those visions become reality. And as a result, on some trains, travel expanded from "necessary" to "luxury."

The Union Limited and the Union Express each ferried passengers between Cape Town and   Witwatersrand (gold!), in a fancy steam-powered style to which 19-Century travelers very quickly became accustomed. By the 1930's, these trains were boasting modern conveniences such as card tables, ceiling fans...even hot and cold running water! A coat of royal-blue paint transformed the two trains into "The Blue Train."...aka "A Palace on Wheels." And the rest is history.

The trains were eventually switched from steam to electric, and were modernized in the 1990's.

Aboard The Blue Train, the wine and cuisine and service are world-class. And around-the-clock personal butlers see to it that no need is left un-met. On this train, there are no "compartments" in which you can touch both walls if you stretch your arms. There are only suites, all of which are  equipped with writing desks - generally by the window, if you'd like to write down your impressions as they fly by. Each suite has an individually-controlled air-conditioning system and a private entertainment center. And each also has a "driver's eye view camera," in which you can see exactly what the engineer is seeing. 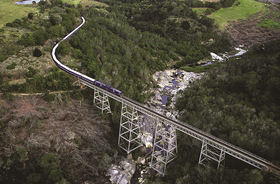 Rooms with a view... (Courtesy The Blue Train)

The ambience aboard can best be described as a combination of "classic romantic" and "earthy-African." Dinner dress is formal. Here you'll eat with exquisite Sheffield cutlery and drink from crystal glassware, on elegant white linen. The cuisine is South African, with items such as Karoo lamb, ostrich filet, Knysna oysters, and award-winning wines the Cape area. And your meal will be accompanied by smooth jazz or light classical music from the Soweto String Quartet.

The lounge car has large windows allowing for great panoramas of the countryside, and Victorian furnishings which lend an air of authenticity to the afternoon High Tea served here. There's even a club car with a sort-of "Gentlemen's Club" with a library and card tables, in which fine ports and cognacs are served along with Cuban cigars.

The Blue Train travels between Pretoria, Cape Town, and Port Elizabeth (on the southeastern coast), through game preserves where you might see leopards or cheetah

The route between Pretoria and Cape Town is a 27-hour jaunt in which you may get a stiff neck from trying to catch all the spectacular scenery. But there are also land excursions. Southbound, you can stop in Kimberley, where you can explore the Big Hole and the Diamond Museum, which tells the story of the town's most-famous export. Northbound, you'll stop at the  historic town of Matjiesfontein, a town seemingly trapped (and very happily) in a Nineteenth-Century time-warp, with Victorian buildings, original London streetlamps, and red double-decker buses.

The Cape Town-Port Elizabeth route offers an excursion to the Cango Caves, filled with striking stalactites and stalagmites with names such as the Devil's Chimney, the Bridal Chamber, and the Fairy Hall. At nearby Outdshoorn, you can visit an ostrich farm.

The Blue Train calls itself "A Window to the Soul of South Africa." And, within minutes of boarding it, you'll know why.