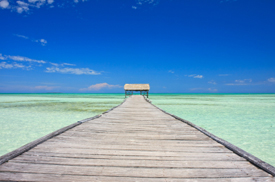 (NEW YORK, NY) -- Three weeks into vacation, it's great to be back in New York where I grew up, got all my education, and started my career in broadcasting at ABC News. For the first time since maybe February, I feel cold. Yesterday when I arrived it was barely 80 with some rain. Today it's 70 maximum, no sun, and we are in the midst of a low according to the weather forecasters that will last till the weekend.

In the UAE it doesn't get below 50, and even that is unusual and happens in January if it happens at all. I don't remember it being cold at all this year. Since February the weather has been in the low 70s, then 80s, from May in the low 90s, and so on. Since July it has been at least 100 every day with humidity fluctuating from 40 to nearly 100. They don't give discomfort numbers in the UAE because that would be too depressing. When I left on August 3, it was 112 with high 90s humidity. No one needs to be told that the discomfort index is 130.

In Denver, Las Vegas, Orlando, and Miami, it has been hot and felt hotter because in American cities, you spend much more time outdoors than you do in the UAE. UAE cities are made for living indoors, inside your home, inside your office, inside a mall or a café, inside your car. You don't walk more than a few steps to go from one indoor area to another with air conditioning blasting everywhere. You can feel cold in the UAE because thermostats tend to be set at arctic, but after a few minutes outside, you welcome the cold.

Until I got to Orlando, I had been a pedestrian, walking as much as possible and taking buses or taxis only for airport transfers. In Denver and Las Vegas, I lived in big hotels that offered everything one might need; for anything else, I walked and enjoyed walking.

Orlando is a typical medium sized American city with a minuscule downtown and a few apartment buildings. Most people live in private houses, making for spread out communities and good distances to be covered for everything.  I stayed with a friend who lives in a lovely house on a lake. It's a great place for recreational and sports walking, but you can't get anything done without a car. You might manage to walk to a supermarket, but that wouldn't help with other errands. For efficient life, you need a car.

Knowing Orlando where I lived before moving to Abu Dhabi in 2005, I had reserved a car at Orlando International Airport and kept it for the 10 days I spent in Florida. I remember when I moved to Orlando in 1997 being struck by the wide boulevards and the orderly traffic. That was in contrast to Warsaw and other cities in Eastern Europe where I had been working since 1983.  Now, coming from the UAE, the contrast was much greater. Roads in the UAE are beautiful. The way people drive on them is not.

In that rental car, I drove to Miami on the Florida Turnpike and returned to Orlando two days later on the west coast, taking I-75 - known as Alligator Alley - from Ft. Lauderdale to Naples and then north to the outskirts of Tampa where it joins I-4 to cut across Central Florida back to Orlando. Overall, I clocked more than 1,000 miles driving during day and night.

I didn't see anyone displaying that kind of careless aggression. What I did see were highway patrol officers who stopped many cars for speeding or other kinds of inappropriate driving behavior. Although many speed, drivers know that a limit of 70 miles per hour means a ticket if you are stopped going even a mile above the limit. In Abu Dhabi, it seems clear that 60 means 80, 100 means 140, 120 means 160; that's what I've been told and have experienced.

Civilized driving in Florida - and probably most other states - is accomplished by enforcement, not by cameras. I didn't see many highway cameras. Some cameras are being put up at some major intersections in Orlando to control drivers who jump lights, a major cause of accidents to other drivers and pedestrians. However, the kind of mass introduction of cameras that is happening in Abu Dhabi right now is inconceivable in a state as large as Florida or indeed in most countries. Putting police officers on the roads and highways, training them to stop drivers who endanger others, and insisting that police themselves observe road safety rules would go a long way toward bringing civilized driving to the UAE.