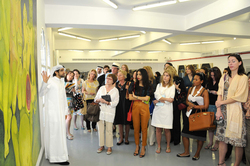 Sheikh Sultan and Visitors at Barjeel

(SHARJAH, UAE) -- The emirate of Sharjah isn't nearly as well known as its immediate neighbor Dubai or Abu Dhabi, but it was in the art and culture business long before Abu Dhabi announced plans for Guggenheim and Louvre branches, and Dubai started the Art Dubai exhibition to attract local and international art collectors.

The Sharjah Art Museum opened in 1997. It is one of a number of museums in Sharjah, the only emirate with museums today although some former palaces and heritage houses are open to visitors throughout the UAE. Now Sharjah is first again with the establishment in March of the Barjeel Art Foundation at the Al Qasba art, business, and entertainment center. It is the first museum devoted to a private art collection in the UAE.

The Barjeel Art Foundation houses modern and contemporary pieces from Sheikh Sultan Sooud Al-Qassemi's collection of 480 works of art  from the Arab world or by Arab artists living elsewhere. The first exhibition called Peripheral Vision features 32 pieces selected by Sheikh Sultan, all of them created after 2007. Sheikh Sultan has said that he wants his collection to be seen. "What's the point in art if it is not shared?" he asks. 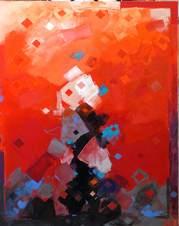 Located near the entry is Untitled by Abdul Qader Al Rais, the most famous Emirati artist who, according to Sheikh Sultan, "cannot be represented by a gallery." Treated like a national treasure, his paintings are handled directly by the Ministry of Culture. Al Rais never paints figures, only landscapes and abstracts sometimes with calligraphy embedded. The small squares that seem to float in this brightly colored painting are a typical motif in his work.

Many people have visited Peripheral Vision over the first five months since it opened, and Sheikh Sultan has personally guided VIPs and others through the collection. The day I visited with a friend last week, we were joined by two other women, and Sheikh Sultan treated us to descriptions of the works on display and even opened locked doors to show some others kept out of sight in storerooms. After Peripheral Vision closes at the end of August, a new selection of works will be made and those works displayed while the rest are out of sight. 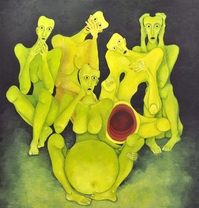 In an interview published in a German arts magazine in June, Sheikh Sultan said, "Central to Barjeel's vision is the creation of an interactive backdrop for Arab artwork included in the collection to be viewed and appreciated. The foundation strives with its space to forge a platform for critical dialogue about the arts."

Works like Ladies of Gaza by Layan Shawabkeh seem to call for greater critical dialogue in the UAE. Created by a Palestinian artist who died of cancer last year at the age of 23, Ladies of Gaza is political and also perhaps recalls early paintings by Picasso. "We want to show how art of the Arab world is nuanced and in a constant state of transformation and renewal," Sheikh Sultan has said, "to expose different aspects of social, political and geographical landscapes that may be obstructed and out of focus."

Egyptian artist Khaled Hafez painted Divine Exodus Diptych, one of two works that explore relationships between secular and religious, old and new, good and evil, using traditional and contemporary figures and symbols. Hafez lives between Egypt, France, and the US and creates art that makes sense in several cultural contexts. Here we see Sheikh Sultan speaking to visitors in front of the painting and the painting itself.

"A foremost goal of Barjeel has been to give the artworks in the collection greater public exposure; making the space accessible for people to come and view a selection of art in rotating exhibitions seemed to be the ideal starting point," explained Sheikh Sultan. He would like schools, universities, professional groups, and cultural institutions to visit the Foundation and make use of the space.

Although Barjeel Art Foundation is technically a gallery, the works shown will never be for sale. They can be borrowed for exhibition locally or internationally by institutions that will pay for transportation and insurance. Sheikh Sultan collected these works over 10 years, and now he wants to share them.

"Artists are the conscience of society," said Sheikh Sultan in an interview with The National daily newspaper in Abu Dhabi earlier this month. "It is essential for their work to be seen and appreciated." The art world of the UAE is fragmented with only a few galleries in Abu Dhabi while the Louvre and the Guggenheim have yet to be built. Meanwhile, local artists are looking for more support from the government and more and more affordable work and exhibition space. 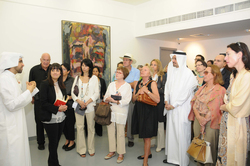 In Dubai the Al Quoz industrial district has become the home of a number of galleries and work spaces for local artists. Dubai hosts the annual Art Dubai exhibition every spring. In the fall Abu Dhabi hosts Art Abu Dhabi. Some have suggested that these two major events be combined since the market in the UAE isn't that big, and the two cities are 75-90 minutes apart by highway.

So far, however, each city is going ahead alone, and over in Sharjah which is less glamorous and less in the news that either Abu Dhabi or Dubai, the Barjeel Art Foundation is breaking new ground. It's an interesting tale of three cities working separately to develop the art industry in the UAE.