(ABU DHABI, UAE) -- More and more tenants are relocating from villas on Abu Dhabi island as prices in the third quarter average 35 percent more than some communities on the mainland, according to a report published today by UAE property management company Asteco.

Al Reef is becoming a popular location thanks to improved road access and affordable prices. As more stock is released over the coming months, prices may fall further.  Four-bedroom villas at Al Reef are now on the market for as low $3200 per month on an annual contract, the Asteco Abu Dhabi Q3 2010 Report states.

Golf Gardens, situated next to the Abu Dhabi Golf Club on the mainland, has bucked price trends over the past three months with rents increasing by up to 12 percent for villas with pools and strong demand driven by a general lack of choice in the Abu Dhabi market for good quality villas with facilities.  Some villas now have waiting lists.

Elaine Jones, CEO of Asteco Property Management, said, "We are starting to see a population shift from the traditional areas of the Abu Dhabi main island towards the mainland that offers better value for money options, especially in terms of villa developments."

On the sales side, continued delay in handover of apartments developed by Sorouh within the investment areas on Reem Island and by Aldar at Al Raha Beach has resulted in transactional sales activity remaining weak over the last three months and prices coming under pressure.

With some developers sitting on unsold inventory, Asteco predicts the market may witness the introduction of lease-to-own schemes, allowing tenants to convert a percentage of their rental to a down-payment to make projects more appealing. 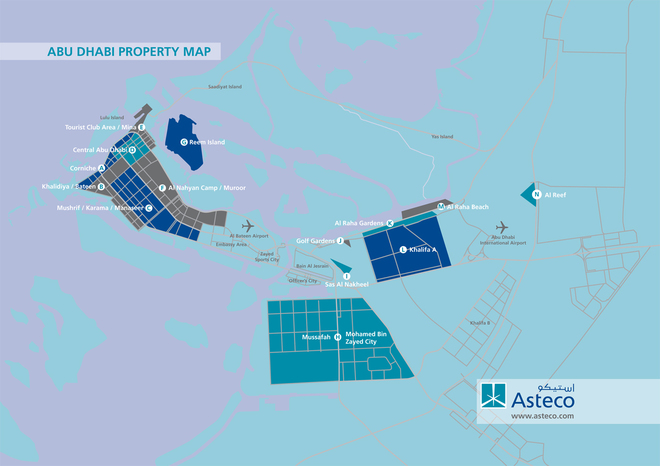