Chinese entrepreneur Wang Jing has unveiled the route for a 170-mile, $40 billion canal in Nicaragua from the Pacific to the Caribbean.

Starting at the port of Brito in the Pacific, the canal will cross Lake Nicaragua, pass the small airport at Morrito and work its way to Bluefields, Mr. Wang told The Daily Telegraph.

Mr. Wang also confidently stated that construction on the canal will start next year.

"I am 100 per cent certain the construction will begin in December 2014 and we will finish in five years in 2019," said Mr. Wang, 41, who heads the telecom company Xinwei.

Since the initial announcement, the canal's proposal has garnered opposition, mostly from environmentalists concerned with the canal's impact on the country's undeveloped areas. Choosing a route that goes through Lake Nicaragua, which already suffers from pollution, will only intensify concerns.

However, Mr. Wang said he would keep environmental protection at the forefront. 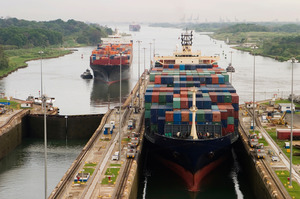 "It is very clear to us that Lake Nicaragua is the mother lake of the country, a symbol like the Yellow River is to China. So protecting this lake is the focus of our feasibility report," he told The Telegraph. "I take all responsibility for any environmental damage. I have told my employees that if we make a mistake on this front, we will be dishonored in the history textbooks of Nicaragua."

There are reportedly 5,000 people working on a feasibility report, which could take more than two years to complete -- a timeline that would conflict with Mr. Wang's planned commencement date.

Besides route issues, many questions have been raised about Mr. Wang's lack of large infrastructure project experience, as well as financing for the massive project. Investors for the project come from China, Europe and the U.S. and will be named in the next two months, Mr. Wang told the Telegraph.

"Our investors are big banks and other large institutions," he said. "They are first class investors".

The idea of canal in Nicaragua dates back centuries; the U.S. considered Nicaragua before choosing Panama for its canal. The Panama Canal is undergoing a $5.2 billion expansion due to finish this year, leading to more questions about the need for a canal in Nicaragua.

"We have never taken [the Nicaragua canal] seriously," Fernando NÃºÃ±ez FÃ¡brega, the foreign minister of Panama, told the Telegraph. "We have spent $5.2 billion (Â£3.4bn) in doubling our canal capacity, so for somebody to do a start-up is a difficult proposition at this point in time,"