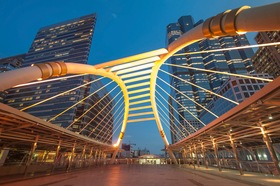 Commercial real estate markets in the U.S. will continue to recover in 2013, albeit slowly. This prognosis comes courtesy of CBRE Market Forecast Summit for 2013 presented on November 16th in Miami Beach.

Fueling the commercial real estate recovery today is a healthy supply of financing, said Chris Ludeman, president, capital markets, Americas at CBRE, who is based in New York. One source of funding, the CMBS market, is thriving again, after several years of little issuance that followed the near demise of that sector in 2009.

With compressed spreads today, CMBS is expected to do better, says Ludeman. For several years, CMBS lenders were not competitive with life insurance companies, because their rates were too high, among other reasons, he said. But now those rates have come down and commercial real estate has higher yields than US Treasuries, which makes it a popular asset class.

Some commercial real estate sectors are doing better than others. The office market is having a hard time recovering, said Ed Schreyer, executive managing director, brokerage agency services, Americas, who is based in Dallas. Much of the difficulty can be traced to "new efficiencies as much as the lack of tenants," he says. "Companies are using more open office (plans) and are finding other means of cutting down on square footage," said Schreyer.

In Tampa, said Bill Obregon, CBRE senior vice president, there is a lot of "office densification." But, he asked, "When does density start to impact productivity?"

"Then there is the 'cultural' side of the business," said Obregon. "Everybody wants an office that looks like Starbucks, with cafÃ© and outdoor seating," he said.

In Orlando, said John Gilbert, CBRE senior vice president, "office demand historically came from bigger drivers like healthcare, (including) back-office medical uses. But, on the flip side, the banking industry needs a lot fewer people than (in previous years) and demand from defense contractors is dropping off as well," he said.

Meanwhile, in Jacksonville, says Oliver Barakat, CBRE senior vice president, there have been chronically-high office vacancies. At the same time, older buildings don't meet new energy efficiency standards, so owners need to decide whether to go green or build a new building, he said. "A new building costs $4 to $5 per square foot more" than existing product. But it is often not worth it to retrofit older buildings; so instead, Barakat expects to see new office buildings going up soon, regardless of where rental rates are.

The multi-family sector is doing well. Historically, said Robert Given, executive vice president, multi-housing in South Florida, 20,000 to 30,000 apartment units have been built per year in Florida. About the same number is in the pipeline today that will be built in the next two to three years, he said. Fueling the need for new units is renewed in-migration, he said. "We should reach 200,000 in net migration by 2016," said Given. "Urbanization is really taking hold."

"In Central and North Florida, we are starting to come back, "said Shelton Granade, CBRE executive vice president, multi-housing in Orlando. In the next two years, occupancies and rents are going up and there are few new units being built.

Although the multi-family sector is doing well, retail is still in the doldrums. "We don't have a demand problem; we have a demolition problem," said Ludeman, referring to the many obsolete malls in the US.

"Retailers are struggling because of over-supply," said Dennis Carson, CBRE senior vice president, investment properties, retail, South Florida. "The 'broken' malls are a major challenge," he said.  Many are either poorly located are or are under lender control," he said. The class B malls are getting pressure from big box stores like Target and other discount retailers, said Carson. Lots of these malls will eventually be retrofitted for non-retail uses, such as medical offices and even apartments, he said. In Miami, "It will be three or four years before we see new retail development," said Carson.