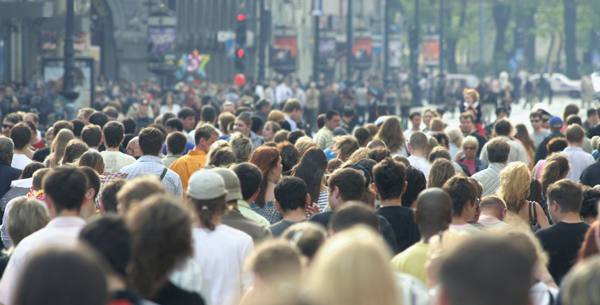 American Population on the Move Since 2010 Census

(Washington D.C.) -- Among the 50 fastest-growing metro areas over the last decade, only 24 of them were also among the 50 fastest growing since the 2010 Census. This is according to the first set of U.S. Census Bureau metropolitan statistical area, micropolitan statistical area and county population estimates to be published since the official 2010 Census population counts were released a year ago.

"Our nation is constantly changing, and these estimates provide us with our first measure of how much substate areas have grown or declined in total population since Census Day, April 1, 2010," Census Bureau Director Robert Groves recent said. "We're already seeing different patterns of population growth than we saw in the last decade."

Conversely, New Orleans, which experienced the greatest percentage loss between 2000 and 2010, was 35th in metro area percentage growth between 2010 and 2011. Besides New Orleans, there were nine metro areas that were not among the 100 fastest growing between 2000 and 2010 but were among the 50 fastest growing from 2010 to 2011: Hinesville-Fort Stewart, Ga.; Columbus, Ga.-Ala.; Odessa, Texas; Fayetteville, N.C.; Oklahoma City, Okla.; Bismarck, N.D.; Miami-Fort Lauderdale-Pompano Beach, Fla.; Gulfport-Biloxi, Miss.; and Hattiesburg, Miss.

Kennewick-Pasco-Richland, Wash., and Austin-Round Rock-San Marcos, Texas, were the nation's two fastest-growing metro areas between 2010 and 2011, with population increases of 4.3 percent and 3.9 percent, respectively.

Although distinct new patterns of growth have emerged since the 2010 Census, some trends persist from the last decade. One such example is the growth in Texas. There were five large metro areas among the 20 fastest growing from 2010 to 2011. Four of them were in Texas: Austin (second), San Antonio (16th), Dallas-Fort Worth (17th) and Houston (18th). The Raleigh-Cary, N.C., market was the fifth fastest-growing metro market last year.

Looking at numeric growth, Dallas-Fort Worth and Houston added more people between 2010 and 2011 than any other metro area (155,000 and 140,000, respectively). These two metro areas were the biggest numeric gainers during the 2000 to 2010 period (with Houston gaining more than Dallas-Fort Worth over the decade).

Another trend that persisted: nearly all of the fastest-growing metro areas from 2010 to 2011 (46 of 50) were located either entirely or partially in the South or West.

Other metro demographic highlights from the recent U.S. Census study: 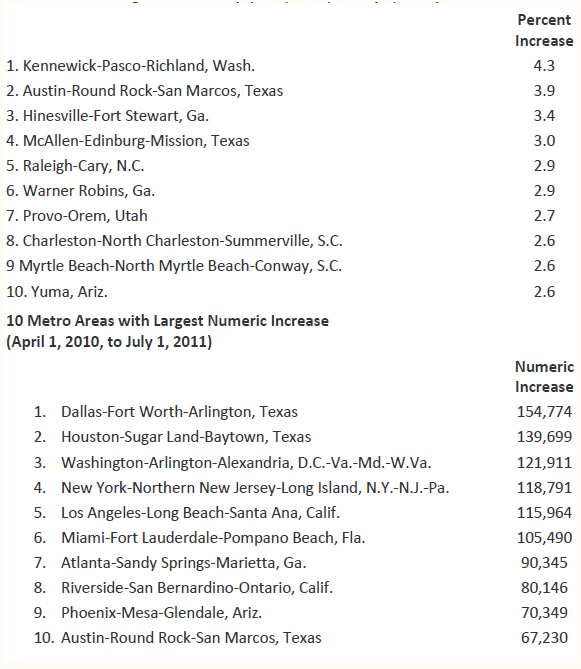