According to Zillow, U.S. home values have been appreciating more per working hour than local minimum wage pays in about half of the nation's 50 largest cities.

The typical U.S. homeowner is gaining $7.09 of equity in their home every hour they're at the office, slightly less than the federal minimum wage of $7.25.

But homeowners in 24 of the 50 largest U.S. cities are in a much more favorable position, especially those in the booming tech towns of San Jose, Calif., San Francisco and Seattle.

In San Jose, the typical homeowner is gaining $99.81 of equity in their home every working-hour, but minimum wage in the city is just $13.50. That means the typical home in San Jose is "earning" over seven times local minimum wage. Even still, the average hourly wage in the San Jose metro is $43.71, which is over two times less than local home value appreciation per working-hour.

While homeownership is widely viewed as a good way to accumulate wealth, many renters are struggling to come up with enough money for a down payment to break into the market. Median rent across the U.S. is about 3 percent higher than it was a year ago, making it increasingly difficult for renters to save. On top of that, home values are up 8 percent annually, which means the amount needed for a down payment is a continually rising target.

"As home values continue to rise at a rapid clip, many homeowners have earned more in home equity over the past year than they would have by working a minimum wage job - and in some areas, more than they'd have earned even if they had a job paying a six-figure annual salary," said Zillow senior economist Aaron Terrazas. "But equity 'earnings' are a lot different than the salary typically taken home on the first and fifteenth of each month; it is not money that accumulates directly into a checking account or that can be spent on daily needs. Equity is only available once a homeowner chooses to sell a home, and even then is often subject to various taxes and other expenses. Still, particularly for homeowners that have already or are very close to paying off a mortgage, this supplemental 'income' - especially if allowed to accumulate over several years - can essentially serve as a kind of second job that pays directly to a homeowner's bottom line, without nearly as much actual work involved in collecting it."

Home values have been appreciating in San Francisco at a rate more than four times the city's minimum wage, and in Seattle, which has the highest minimum wage among all cities analyzed at $15 per hour, the typical homeowner is gaining $54.24 of equity per working-hour.

A home is often a person's biggest financial investment, and according to the 2017 Zillow Group Consumer Housing Trends Report, the typical American homeowner has 40 percent of their wealth tied up in their home. A recent Zillow survey found that 70 percent of Americans view their home as a positive long-term investment.

Homeowners on the West Coast aren't the only ones benefiting from a hot housing market. Home values in New York, Las Vegas, Honolulu and Nashville have been appreciating over $6 more per working-hour than the city's minimum-wage earners make. 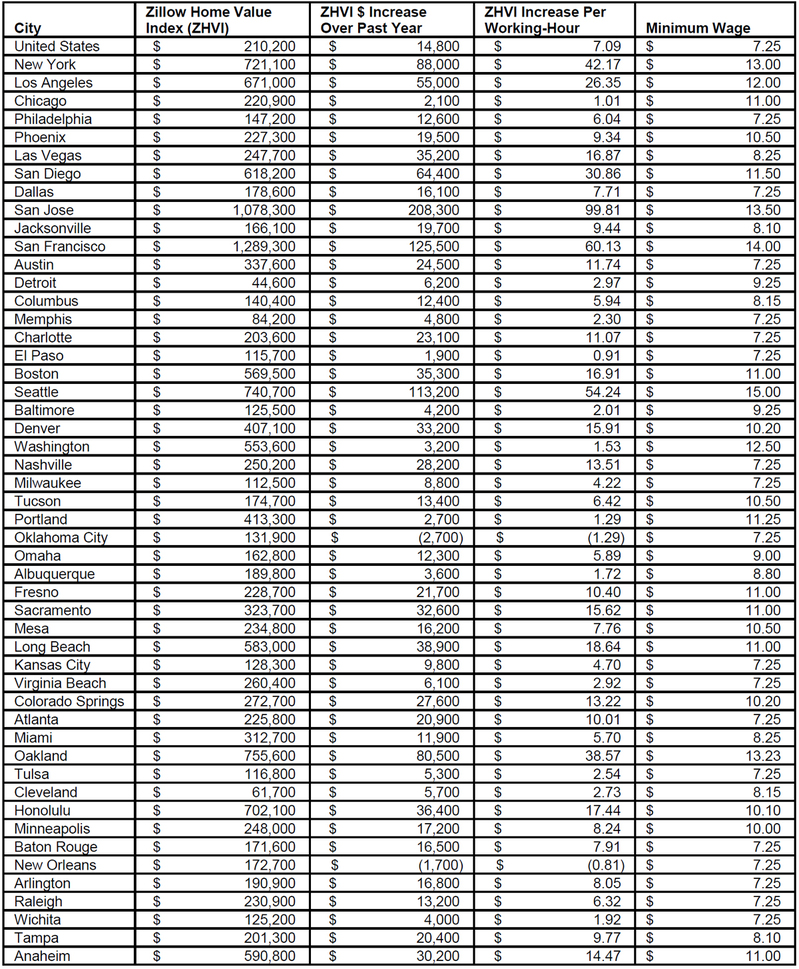