National property broker Redfin is reporting that in May 2021 over 70% of home offers written by Redfin agents faced competition, down from a revised rate of 73.6% in April 2021.

That's still up significantly from 52.7% in May 2020, which was impacted by pandemic stay-at-home orders. An offer is considered part of a bidding war if a Redfin agent reported that it faced at least one competing bid.

Competition typically tapers in the early summer following spring homebuying season, so seasonality may be contributing to the dip in the May bidding-war rate. Early signals of a cooldown in the housing market may also be a factor.

American house hunters have grappled with record-breaking levels of competition during the coronavirus pandemic as homebuyer demand has skyrocketed due to low mortgage rates and flexible work policies. This has intensified an existing housing shortage, which has also fueled fierce bidding wars. But there are signs that the red-hot market may be cooling ever so slightly; home-purchase applications have been on the decline since late March and pending sales recently fell 10% from their peak about a month ago. As Redfin Chief Economist Daryl Fairweather put it earlier this month, "The housing market was going 100 miles per hour and now it's down to 80."

Competition is likely starting to level off as well, and may have already hit its peak, according to Fairweather.

"After months of surging prices and low inventory, some house hunters are moving to the sidelines--either because they're priced out or burned out," Fairweather said. "Americans are spending more of their money on things like travel and dining out now that pandemic restrictions are being lifted."

Spokane and Raleigh Have the Highest Bidding-War Rates

Spokane, WA had the highest bidding-war rate of the 50 U.S. metropolitan areas in this analysis, with 86.7% of offers written by Redfin agents facing competition in May. Next came Raleigh, NC, at 84.5%, and Tucson, AZ, at 81.8%. Salt Lake City and Charleston, SC rounded out the top five, with bidding-war rates of 81.5% and 79.3%, respectively.

In San Diego, the bidding-war rate was 74.6% in May. While that's still relatively high, it's down from 86.2% in April, representing one of the largest month-over-month declines among the metros in this analysis.

"Competition is still high, but the good news is buyers are having to make fewer offers to win bidding wars," said John Copeland, a Redfin real estate agent in San Diego. "A few months ago, buyers were bidding on three to five homes before winning. Now it's more like one to two. Part of that is buyers grasping the reality of the market; they've become more educated about what they need to do to win, so they no longer need to make as many offers."

To be included in the table below, metros must have had at least 20 offers recorded by Redfin agents in both May 2021 and April 2021. The table is sorted by highest to lowest bidding-war rates in May 2021. Blank spaces in the May 2020 column represent metros for which there were fewer than 20 offers submitted by Redfin agents that month. 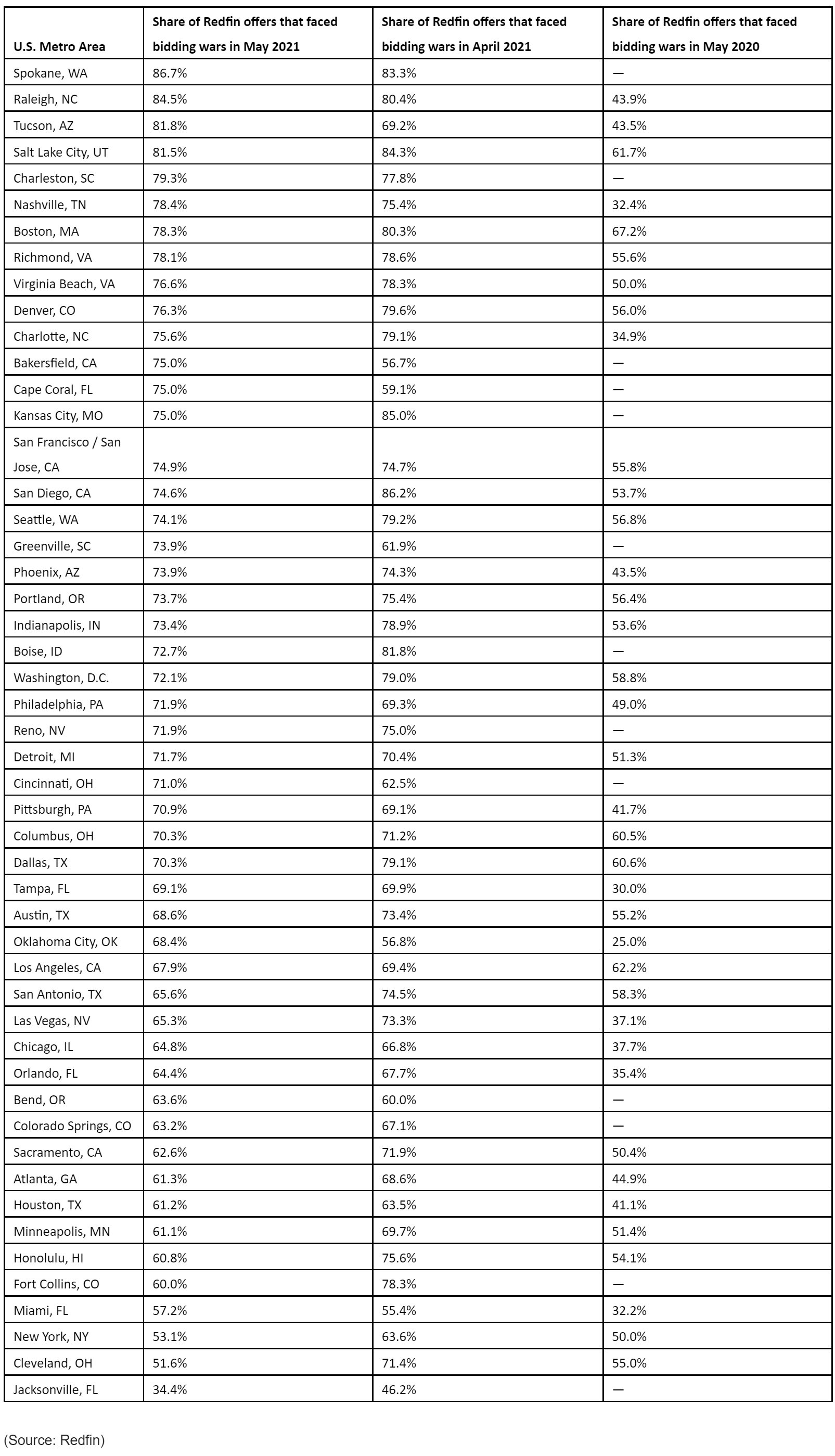