U.S. Homeowners Staying in Homes 5 Years Longer Than in 2010

According to a new report from Redfin, the typical American homeowner has spent 13 years in their home, up from eight years in 2010.

Homeowners have been in their homes the longest in Salt Lake City, Houston, Fort Worth, San Antonio, and Dallas, with homeowners in those metros staying in their homes for more than 20 years on average.

"In Dallas, there are many neighborhoods that were built in the 1950s and 1960s where most of today's residents are still the original homeowners," said Dallas Redfin agent Christopher Dillard. "Because prices have been going up, and folks are gaining more and more equity, it's hard to justify selling when there aren't many if any affordable options."

Many local governments have put policies in place that reduce property tax burdens for senior citizens, which have made it more affordable for older people to stay in their homes longer. In Texas, where homeowners tend to stay put the longest, homeowners over the age of 65 have the option to defer property taxes until the home is sold.

Aging in place has reduced the number of homes for sale

Homeowners age 67 to 85 are remaining homeowners longer, causing a shortage of 1.6 million homes, according to a report by Freddie Mac. In San Francisco, the median homeowner has been in their home for 14 years, compared to only 10 years in 2010. At the same time, there are about half as many homes for sale in San Francisco than there were in 2010, and the homes that are for sale are more expensive. The median home price has more than doubled in San Francisco since 2010.

In Salt Lake City, where the median home tenure is the highest, the number of homes for sale has declined 59 percent from 2010 to 2019. That has led to a situation where current homeowners are further locked in place because they find it too difficult to sell and buy a home at the same time.

"I have a client right now in West Valley who wants to move into the city in a more walkable, higher priced neighborhood," said Salt Lake City Redfin agent Daniel Lopez. "They would need to sell to buy, but are worried about making a competitive offer when they still need to sell their current home. I rarely see offers with home sale contingencies accepted in Salt Lake City because the market is competitive."

Homeowners who already live with walkable access to amenities like schools, parks and shops are more likely to stay put in homes. And when homeowners stay put that means fewer homes are for sale. In zip codes with above-average Walk Score ratings for their metro, the median home tenure is 11 months longer and there is more competition for the homes that are listed with homes staying on the market eight fewer days compared to zip codes with below-average Walk Score ratings. That means first-time homebuyers who are still looking to own a home and start a family are relegated to neighborhoods in less walkable exurbs on the outskirts of town. 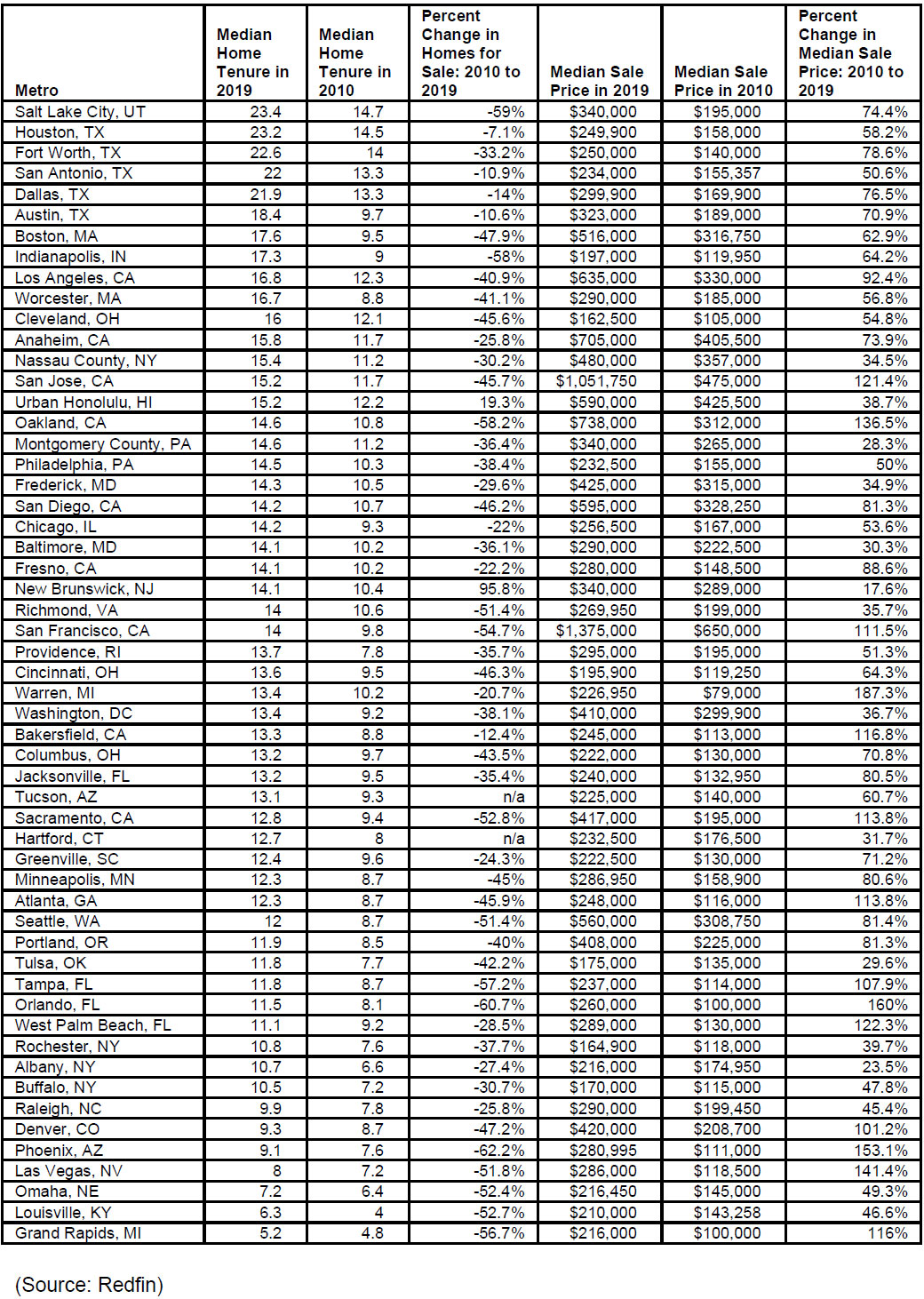